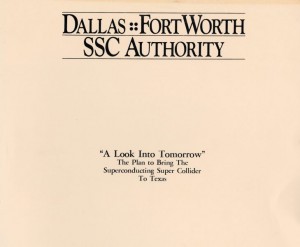 Everything’s bigger in Texas…and that includes holes in the ground. A little over 20 years ago, Congress halted the construction of what would have been the world’s largest Super Collider. Construction of the Superconducting Super Collider (SSC) began in the late 1980s and called for the creation of a tunnel 14 feet in diameter and 52 miles in circumference under and around the town of Waxahachie, Texas. Planned to be much larger in size and energy output than the CERN Large Hadron Collider near Geneva, Switzerland, many believe the Higgs boson particle (discovered at CERN in 2012) would have been discovered a decade earlier in Texas had the SSC been completed. The reasons for the untimely death of the project once $2 billion had been spent and 17 miles of tunnel had been bored are complicated. Much debated, the most frequently cited reasons for the SSC’s cancellation include the mismanagement of physicists not used to managing on such an enormous scale and budget; the end of the Cold War diminishing Americans’ interest in big science research; the objections of other scientific fields competing for funding; the increasing costs of the construction of the SSC; and the politicization of science. Whatever the reason, the project was officially halted by Congress in 1993 leaving a 17 mile hole under Waxahachie.

Contrary to its ultimate fate, however, the initial stages of the project were met with much excitement and optimism. When the project was finally approved in 1987 by Ronald Reagan after several years at the design stage, 43 states submitted applications to host the SSC. Of those 43, 8 states including Texas were selected as the best geological candidates and invited to submit proposals outlining possible sites. Because the Super Collider was expected to create thousands of new jobs and attract an influx of some of the world’s leading scientists, several different Texas cities and regions submitted proposals outlining the various geological, environmental, and economic benefits of their respective regions.

The Superconducting Super Collider Collection-one of the collections included in the Post-War Industry and Development of the Southwest Metroplex project-is comprised of all of the Texas proposals and includes the Dallas-Fort Worth SSC Authority’s winning proposal. Entitled “A Look into Tomorrow: The Plan to Bring the Superconducting Super Collider to Texas,” the detailed proposal, running several hundred pages long, offers a fascinating glimpse into the initial planning stages of the immense scientific project. In addition to the in-depth geological reports and surveys, the proposal contains vast amounts of information pertaining to the then prevailing (and expected future) economic trends of DFW during the late 1980’s and includes data pertaining to population; jobs; housing; transportation; infrastructure; utilities; real estate; hospitals; education; and the economy.

While DFW ultimately succeeded in winning the site, the Superconducting Super Collider unfortunately died a premature death having reached only 20 percent completion. And rather than realizing the dream of bringing big science to North Texas, Waxahachie has been left instead with the remnant of a $2 billion hole in the ground. 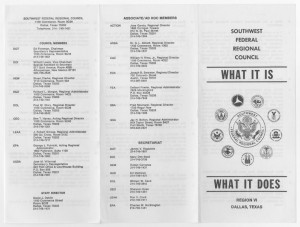