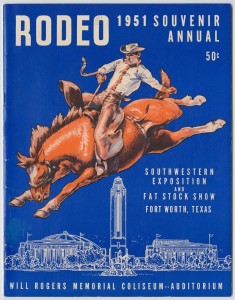 Affectionately known as Cowtown, the city of Fort Worth has enjoyed a long and colorful association with cattle and livestock throughout its history. Originally a cattle driving stop along the famed Chisolm Trail, the arrival of the Texas and Pacific Railway in 1876 transformed both the city and the livestock business. Boston businessmen Greenleif Simpson and Louville Niles recognized the potential of the city as a major cattle shipment hub and, along with other investors, purchased the Fort Worth Stockyards Company in 1893. Other businesses were soon lured to the Stockyards sparking a boom in business and construction in the area.

In 1944, at the height of business for the Stockyards, 5,277,496 head of livestock were processed. This would signal the peak of the livestock business for the Stockyards, however, as the following years began to witness a long and steady decline. Many attribute the decline to the explosion of highway growth that occurred during the postwar years across America and the rise of the trucking industry as a cheaper and more flexible alternative to the rail transport of livestock.

The Fort Worth Stockyards now serves as mainly a historical district and major tourist destination, although some livestock business is still conducted there. The Fort Worth Stockyards Company Records Collection contains extensive holdings documenting the business records and activities of the Stockyards and several Commission houses from 1923-1973. Also contained within the collection are materials pertaining to the growth of the city of Ft. Worth during the early and mid-twentieth century.