Video games have cemented themselves in modern culture as the kingpin of entertainment and art form. They are everywhere; in arcades, on our computers, on our phones; we even have dedicated computer systems devoted specifically as consoles for video games. It is hard to imagine someone living in western society that doesn’t play video games in some way, be it Candy Crush or Dark Souls. It is for this reason that I find it important to make distinctions in how we can distinguish and evaluate video game elements as means of better understanding their impact in our culture. In order to begin doing this, though, we must create some general definition of what can constitute as a video game.

What is a game?

What is a game? This question has plagued scholars and fans alike for as long as games and game study have existed, although it has come to recent light due to video games, and its answers are somewhat critical to our understanding of how to define video games. After all, a video game is typically majorly comprised of game elements, and therefore an understanding of the study of games is important to our understanding of video games. It’s important to note that games and video games are two separate but overlapping creations. To me, a video game is much more than just a game; it usually has some kind of story or lore, music and sound effects are often involved, and in many cases, video games don’t entirely qualify as games. So to define video games as entirely within the realm of games is severely limiting to the kinds of things that video games have accomplished. I’ll provide an example in the following. One of the most popular ways of defining games comes from computer game designer Chris Crawford. His definition comes in the form of a series of dichotomies to make a taxonomy, beginning with creative expression. I’ll link to a break down of Crawford’s definition here: Chris Crawford Game Definition. The Wikipedia page I linked to does a good job of verbally explaining the taxonomy, but a graphical representation is especially useful for visual conceptualization so I will include one here: 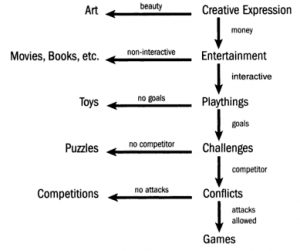 It is through this taxonomy that the distinction between video games and games becomes ever clearer. Crawford even points out in his book Chris Crawford on Game Design that video games like The Sims do not inherently qualify as games, but rather as “software toys,” meaning that a video game can be a video game while not being a game in the traditional sense. It is also important to understand, as Crawford points out, that much of this can be subjectively based on the player’s perception. For example, with The Sims, there is no inherent goal of the video game (making it a toy by Crawford’s taxonomy), but the player may decide they want to have their character make a sandwich. This distinction moves The Sims from being a toy to being a puzzle, as the player now has a goal, but no competitor. This principle can be applied to other video games that don’t necessarily fit the definition of a game, such as Minecraft, to move them throughout Crawford’s taxonomy.

Disputes within the industry

The definition I have provided is by no means the absolute definition of games, nor the only one. Many scholars, professionals, and enthusiasts have contemplated, created, and debated innumerable ideas for how to define games. Some even call into question the importance of the idea, claiming that it is used more often to exclude creators or players from discussion, rather than as a building tool for study. I won’t add much more as to definitions here, as the one I have provided is the one I will primarily refer to. I encourage you to read other ideas on games and video games, as these can only serve to better shape our ideas on these subjects and broaden the creative horizons for the industry. I’ll add a video playlist here of several people discussing the idea of what a game is and why this matters, most of which cite Crawford’s definition of a game:

So what’s the point?

Video games are an undoubted oddity both in the realm of entertainment and in the world of art. Their strange concoction of irregularity concerning story and game elements make them increasingly difficult to study and understand, from both design aspects and scholarly aspects. They are by far the most unique and unexplored mediums of the modern era. And this can be seen by people constantly pushing the boundaries of what we might consider to be a video game, with titles like Mountain, The Stanley Parable, and Goat Simulator. At the end of the day, we all love our video games and all the many things that make them so unique. And that’s the point of this series, to point out unique elements of video games and determine how to understand and evaluate them. With the basis of game definition this post has provided, we can move forward in breaking down more individual elements of games. I hope you’ve learned something new; I know I learned a lot in researching for this. Let us know what you think by tweeting us @DH_UNT or commenting below, and let us know, how do you define a game? What are some of your favorite video games that might not be considered games?