Skip to main content
Newcomers to the video game community have a high bar to entry. Video games are complex beasts of entertainment and art, often making them difficult to approach and hard to understand; heck, even skills learned in a certain type of video game aren’t transferable to another type of video game. And all of this is already ignoring the lack of understanding and definition to the idea of game literacy within the industry. I’ll include the video that inspired me to make this post here, for clarification: The bit that inspired this post was when Daniel (the host of Extra Credits) talked about a lack of games for beginners, and the failure of individuals to create comprehensive and consistent lists of starting recommendations. That’s what I want this to be: a list of games that can be used to teach basic game mechanics and ease new players into the medium, accompanied by explanations for their inclusion in the list. By no means do I make the claim that this list will be any more coherent than the ones that Daniel criticizes. Rather, I hope to in some way add to the conversation and possibilities of helping new players join the video game community and better outline the needs of beginning players. I will acknowledge that as a computer-based gamer myself, I will primarily provide computer-based games in this list. So without further ado, the list. 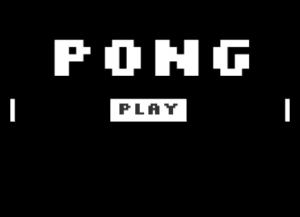 What better place for beginners to start than one of the video games that kickstarted the industry? Pong is a classic, released in 1972 in arcades across the country. It didn’t take long for this arcade hit to be remade into a home edition. But what makes it so great for beginning players? Its mechanics are simple and its gameplay is easily relatable. The controls are very simple: control your bar and keep the ball from crossing your side. And this is what makes the game relatable as well, the gameplay is familiar. Pong is practically identical to ping pong, hence the video game’s name. This combination provides a good starting point for new players, as well as a valuable history lesson for them to see where the industry started. There’s a free version of the game available online here: Pong Game.

What some might consider an odd inclusion, Bejeweled offers many things to learn to the beginning player. It begins to “take off the training wheels” by introducing less familiar mechanics, as well as the common idea of a leveling system. It begins to facilitate the basics of pattern recognition and strategizing. The classic mode allows players to go at their own pace, and really think about the moves they’re making and how it impacts their performance in the game. They might not have to play long to grasp this game, but its teachings create fundamentals to most video games. You can find a free version to play here: Bejeweled 2.

Alright, now it’s time to get a little closer to “real” games. This cute little app has simple mechanics, but its adorable-faced characters and intriguing strategy will draw anyone in. Cobine 1 and 2 to get three, then combine like multiples of three to keep playing. Addicting and plenty of fun, it’s a fantastic addition to this list. And the best part is that it’s available on iOS (Threes! iOS) and Android (Threes! Android), so anyone with a smartphone should have access to it!

Speaking of “real” games, Limbo is about as real as it gets. This point and click, puzzle-solving adventure title is set in a dark and sinister world, where you must help guide a little boy and keep him from certain doom. The mechanics are simple, but the gameplay and puzzles definitely put this game a cut above those I’ve listed previously. You can purchase and download it through Steam here: Limbo Steam Game.

Arguably one of the most popular games of all time, Portal stands out as an excellent game that just about anyone could get into. Simple, yet interesting mechanics are seamlessly put into use and the puzzles scale excellently. The humor of the game helps ease frustration from puzzles, the gameplay is solid, and almost anyone in gaming knows about it. This is about as good as it gets for starting players. You can purchase and download the game through Steam here: Portal Steam Game.