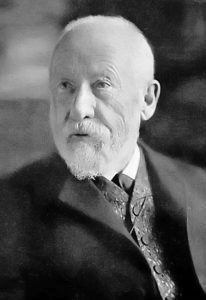 Wilhelm Dilthey, 1833-1911, German philosopher. Sought to apply the rigor of Kant’s philosophy to human experience. Made significant and lasting contributions to history, hermeneutics, and empirical philosophy.

The distinction we know today between science and the humanities is a relatively recent one. It has its roots in 19th century philosophy, which is radical in the way that it makes nature the source of all possible knowledge. [1] This “natural” grounding is the rationale behind science as we know it; it not only prescribes where knowledge arises, but in what knowledge can possibly consist. Grounding knowledge in nature means that knowledge is “factual,” that is, it can only describe phenomena in quantifiable terms. The advantage to this understanding of knowledge is clear: it approaches universality, it clears ambiguity, and it provides a “sure” basis for systems of knowledge. In the 19th century, however, Europe began to undergo a reaction against the “mechanized” and “impersonal” forces of the Enlightenment. New forms of analysis made their way onto the scene, most especially in the form of Romanticism, which put emphasis on the subject–emotion, the experience of the sublimity of nature, the primacy of the individual. Toward the end of the 19th century, German philosopher Wilhelm Dilthey would fundamentally distinguish between forms of knowledge about things, as opposed to knowledge of the inner experience of things. Natural knowledge about things he termed Naturwissenschaften–roughly, “Natural Sciences”—while knowledge of the inner experience of things he termed Geisteswissenschaften–roughly, “Spirit Sciences,” or “Human Sciences.” [2] 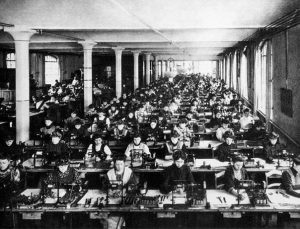 Photo of women working in a 19th century factory during the Industrial Revolution. The mechanized, routinized, impersonalized labor depicted serves as an illustration for the rationale behind reactions against the Natural Sciences and their worldview.

To question whether or not the Digital Humanities contribute to the “scientification of the humanities” (or even to discuss the scientification of the humanities at all) relies on Dilthey’s distinction. At the heart of the concern is how distinct these two forms of knowledge should be, and what relationship they share. This question is not merely theoretical as the politics of academia weigh fully on concerns of primacy, prestige, and of course, funding. Does DH emphasize the primacy of the Natural Sciences by remaking the Human Sciences in their image? Does it reflect a totalized scientific worldview? Potential responses to these questions can either support, modify, or challenge the hard distinction between the Natural and Human Sciences. Proponents of DH refer to the need in the humanities to formulate patterns and principles in which to make sense of human experience; opponents, in this case Matthew Kirschbaum, argues that DH “increasingly serves to focus the anxiety and even outrage of individual scholars over their own lack of agency amid the turmoil in their institutions and professions.” As technology develops and provides changes in our media of knowledge, perhaps it makes sense that we might expect a shift in the structure or even essence of knowledge. Yet, as digitized as the media may be, the outcomes of DH are always in the humanities–thus the tension between quantitative methods and distinctly “human” results. As Adam Kirsch at The New Republic, who is critical of DH in an essay titled “Technology is Taking Over English Departments” summarizes, “Humanistic thinking does not proceed by experiments that yield results; it is a matter of mental experiences, provoked by works of art and history, that expand the range of one’s understanding and sympathy.” 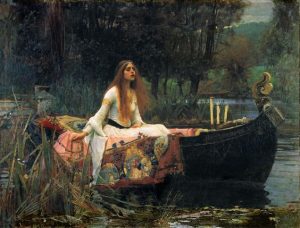 The Lady of Shallott, John William Waterhouse (1888), depicting a scene from an Alfred Lord Tennyson poem of the same name, highlights the vision of Romanticism and its view of the human subject in light of the depersonalized Industrial forces of the same era.