Non-HTML content is more common than you might at first think. Do you use Microsoft Office apps (Word, Excel, Outlook, or PowerPoint)? How about Adobe Acrobat? These are very common applications and software, used nearly everyday, and also classified as Non-HTML. This means that their coding is not Hypertext Markup Language. HTML has become the preferred coding language for accessible digital design, it is considered Section 508 complaint (as are the Non-HTML apps that are highlighted in this post). 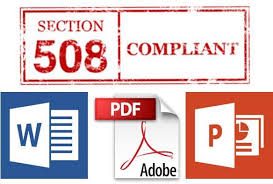 There is a big difference between HTML and Non-HTML. That difference being that one is meant to work, more frequently, in a strictly online or web environment (HTML), and Non-HTML is independent of any web environment for operation. So, the focus of this post is a quick introduction to the Non-HTML side of this. Eventually, I may post about HTML and accessible digital design, but right now it is about making the things we create most frequently as accessible as possible from the start. Though neither side of this unimportant.

PDFs, portable document format, is arguably one of the most common formats that people of all walks of life in the digital world deal with on a near daily basis. As such it is very important that these types of documents are accessible to as many people as possible. Adobe Acrobat DC is one of the best renditions of Acrobat for accessibility considerations. There are two categories that the functions fall into supporting the reading of PDFs, and the creation of accessible PDFs. The features and how to create an accessible PDF will be the subject of a blog post in the near future. If you are curious, however the best place to go is Adobe’s Accessibility Training page that has several links to guides that will assist you in making your existing and future PDFs accessible.

This is another extremely common suite of software that most people are familiar with. Microsoft in recent iterations of the Office Suite has become conscious of the need for accessibility features, and as of the 2010 version has been adding and refining these features. There are 3 or 4 that are most common to use and these are mentioned below; this is not to be an extensive look at these apps– like the PDF they will each receive a blog post that focuses on them, and how to create accessible documents with them. If you cannot wait the Accessibility Training Videos for Microsoft Office are very good.

Word is the language document creator. Like the words of this blog are strung together to convey ideas, word is used for the same thing. If you have ever written a paper or story on a computer odds are pretty even that you used Word to do it. When you wrote that paper or story did you think about things like titles, headings, font size, lists, and such. Maybe. But I would bet you only thought about it in terms of the requirements of the professor. I will admit until recently I was guilty of this too. However, with very little extra effort you can make all of your documents more accessible for everyone; it’ll literally take seconds, in most cases!

Excel is the information creator. If you need data in an orderly set, especially if it deals with number data, odds are again fairly even you used Excel to do it in. The accessibility concept and some of the considerations remain the same as Word, and are frequently just as quick to implement! Some of the specifics include formatting tables, cells, and charts; and alternate text.

PowerPoint is the presentation maker of the Office Suites. This is the one application that you may not have used, but I bet that you have seen PowerPoint presentations. Creating them can be fun, and making them accessible is, like Word and Excel, very easy! It is sort of a cross between the considerations of Word and Excel, broadly speaking. There are a few modifications to consider due to the nature of presentations though.

Of the four Office Suite apps I want to address this is perhaps the most surprising one. I certainly did not know about the accessibility features of Outlook until recently! However, with only a few clicks, and a bit of thought my work and personal Outlook settings are now optimized for accessibility. The best part, many of the considerations can be set and “forgot” in the Outlook settings; so you won’t even have to worry about them once they are set!

Now I have focused on Adobe Acrobat and Microsoft Office Suite, but there are other Non-HTML programs and applications. I will not get into them, but in the interest of completeness, or something resembling it, I will add them here. The additional programs are taken from the University of Illinois at Chicago‘s Digital Accessibility Committee, and include not only many of the programs discussed above but also these: This post is the 3rd part of a series on Digital Accessibility. The others What is Digital Accessibility and A Universe of Universal Design are the first and second parts respectively.