The future of net neutrality was put in question just before Thanksgiving, with the unveiling of the FCC’s plan to repeal the Obama Administration’s regulations preventing internet service providers (ISPs) from throttling content or charging premium rates to access content.

Net neutrality is the principle that regardless of user, content, website, platform, application, equipment, or method all internet providers must treat all internet data the same. This means that providers cannot legally throttle (slow down), or charge additional monies for particular websites and/or web content.

There are major supporters of net neutrality among them Amazon, Microsoft, Twitter, Yahoo, and many others. Even civil rights groups such as the Electronic Frontier Foundation, Free Press, Battle for the Internet, and Fight for the Future also side with net neutrality.

This video from John Oliver provides an overview of the stakes of net neutrality for consumers:

While the FCC’s full plan is currently unavailable for assessment by the public it is understood by many that it deals with repealing aspects of the categorization and regulations approved in 2015. This 2015 approval, which signaled a change of course in the FCC’s stance on the internet, brought the internet under Title II regulation. FCC Chairman Ajit Pai has released an “Internet Regulations: Myths vs Fact” document, as well as a draft of his order to “Restore Internet Freedom.”

Opponents of net neutrality feel that there is a reduction in investment with net neutrality regulations in place, and that there was significant and growing competition and investment before they took effect. They feel that this indicates there is no need for the Obama-era regulations, and that their enforcement deters competition. They are also concerned with preventing the overuse of bandwidth, and potential tax increases with the current regulations. It is worth noting that both the President and Chairman Pai oppose net neutrality. Chairman Pai is a former Associate General Counsel for Verizon Communications, one of the businesses that would potentially benefit from eliminating net neutrality.

Proponents of net neutrality, are just as passionate that the control of data stays with the users and that cable companies that provide access are not able to screen, interrupt or filter internet content without a court order. The neutrality of the internet is also a place of free speech, and that it will continue to foster the first amendment right and further political participation. Also psychological adaptation would mean that users who are used to a faster download speed would find reverting to a slower speed intolerable. As for the argument of competition by keeping the playing field level with equal internet access competition and innovation are actually able to thrive and it is quality not a company or a person’s pocketbook that determines success or failure on the internet.

Most importantly, Equal internet access (Net neutrality), allows level access to media centers. Meaning that if the internet service provider or an affiliate is in competition with another company such as Netflix, Amazon, Youtube, Hulu, etc. they can charge more both to those companies and ultimately to the consumer for access, they can throttle the loading and buffering of those sites, or they may even be able to deny access to those sites or portions of them. I don’t know about most of you, but I practically live on my Netflix, Amazon, Youtube, and Hulu accounts (as that is where 95% or more of my entertainment comes from). 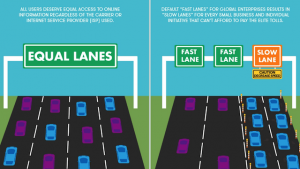 On a related note the United States is not the only country or political entity to implement protections to net neutrality in the last few years. The European Union at the end of 2015, around the same time the US implemented our net neutrality protections, passed and implemented the European Net Neutrality Standard. As far as is known the Europeans have no plans to revoke this plan, which is similar to its US counterpart, and has apparently benefited the majority of consumers, providers, and industries of the Europe that fall under its jurisdiction.

Whatever your position is on the ability of ISPs to monitor, control, and regulate access to content on the internet, you can send your comments to the FCC by clicking on the “Express” link on the FCC’s Proceedings site to enter a comment. You can also contact your representatives in Congress, since congressional pressure on the FCC can directly affect policy.