Skip to main content
Video games face some major issues in archiving, specifically around access. In honor of International Digital Preservation Day, I wanted to talk about the difficulties surrounding video game archiving, as well as highlight some interesting video game archives. This is by no means a detailed exploration of archive issues within the video game community, nor do I seek to answer those problems; I am nowhere near qualified enough to propose solutions, however, I do find the major problems I will discuss generally recognizable and easy to understand.

Video games face a unique problem to other archive formats: accessibility. Yes, accessibility is always something to consider when creating any archive, but it plays a different role for games. An archive of pictures or videos might be accessed online through a website or web service. Videos can be hosted on YouTube or other video hosting sites. Images have plenty of hosting services, like Imgur. More academic services, like Omeka, provide detailed metadata inclusion. Fundamentally, access to pictures, videos, and even text, is fairly straightforward and well supported: find a hosting site, upload your content, relax as the world sees the fruits of your labor hosted on a fairly standardized platform. This is a simplified idea of archiving that excludes questions about accurate and inclusive metadata, broadcasting accessibility to communities, etc., but it serves as a juxtaposition to the accessibility issues video games face.

Video games, as an interactive media, fundamentally face issues concerning the ways in which the public has access to them. To begin, these games are playable on a large variety of devices, many of which are not cross-compatible. Even putting aside the feud between PlayStation and Xbox, Nintendo Games by and large are only accessible through Nintendo devices, like the NintendoDS, Wii, or even Switch. The very interfaces for these games present issues to their accessibility. Now we can no longer gather the desired files, find a suitable host, and upload our archive; we must also ensure that these hosts enable support for the large variety of platforms these games exist on. 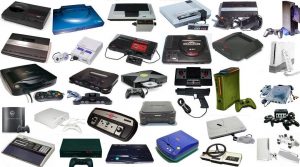 To The Rescue: Old School Emulators

The solution to this problem, at least for computer-based games, has been emulator programs. Older computer games are written in coding languages that are no longer used by modern computers, as well as often being designed to work with very specific hardware limitations that no longer exist. Emulators serve as a gateway between these old games and modern computing, letting users play the games as though they were made for modern hardware. But these types of emulators are really only a bandage to this problem, as there are usually sacrifices to gameplay that must be made to accommodate the code. For instance, frame rate changes can impact the play of many action-based titles, and many early computer games worked on CRT monitors, which have long gone out of standard use and provide more difficulties in emulation.

Emulators also attempt to bridge the gap between console and computer games. Consoles are designed with specific hardware, which makes things easier for developers because they know what they’re working with. The downside to this is that these games are then only designed to work with that particular system. Computers, however, often come in large varieties of hardware combinations, meaning that developers need to account for anything. Console emulators allow users to use their computer as though it were a console (assuming they can run the game disc on their system, or get a hold of the game files online). But we see the same issues as older games: the different interfaces augment the gameplay. And this is only compounded in titles that require console-specific hardware, like the Xbox Kinect or Wii-mote.

Another approach to video game archiving has been to simply record another person playing the game. In popular media, this has formatted itself as game commentary or “Let’s Play” videos, where individuals add their own commentary and input over the gameplay. The more hands-off approach has been to simply record the gameplay, free of outside input. This approach destroys the most defining feature of video games: their interactivity. To watch someone else play a game is not equivalent to playing the game yourself, which then only relates to the accessibility problems already discussed.

Wrapping this bit up…

Accessibility is a focal problem to overcome in order to properly archive video games. If you deal with any other problem long enough, you will eventually land back at how to enable players with a proper interaction of the game. Now, I want to feature some online video game archives of note for their size, scope, or lack of support. These are both academic and publicly created.

There aren’t a lot of dedicated archives for large-scale video games out there, largely to do with the cost of operation and difficulty of dealing with copyrights. The following, however, I have found online with a brief search. It is not a complete list of archives but hopefully highlights some good projects.

These archives are a subset of a larger archive mission. This group aims to preserve text and media of all forms on the internet. It is largely community developed, but all projects are accessible to the public. 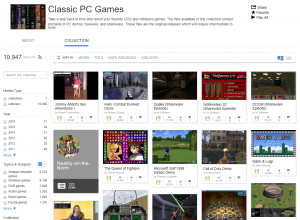 This is a large collection of games considered to be classics. These games are downloadable and typically require an emulator in order to run. Many of these are older titles, but with some minor adjustments, they should all be playable. You can access it here: Classic PC Games 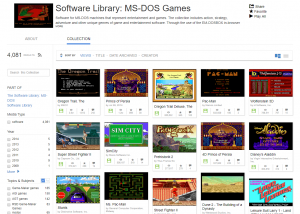 If you’re a nostalgia freak, this is definitely the page for you. All of these are games originally developed to run in MS-DOS, and thanks to the built-in emulator, many of them are playable in-browser. You can access it here: MS-DOS Games 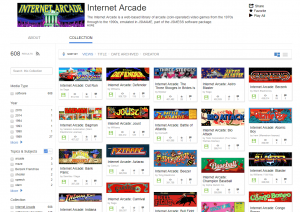 Homepage of the Internet Arcade

Speaking of nostalgia, this archive features arcade games from the 1970’s through the 1990’s. Many of them are playable in-browser, as well as available for download. You can access it here: Internet Arcade 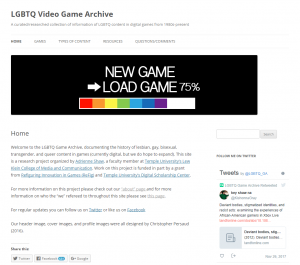 This archive centers itself on documenting games which include LGBTQ content in them. While you may not be able to play these games from this website, the curators and researchers have put in great effort to accurately describe the gameplay, as well as describing the roles in which the documented characters play. You can access it here: LGBTQ Video Game Archive

While I was unable to find a collection of games featuring people of color (likely due to the massive lack of said games), I did find a webpage from the University of Michigan research guides which hosts resources on this topic, as well as diversity in gaming as a whole. It’s really well developed and I highly recommend giving it a look. You can access it here: University of Michigan: Diversity in Gaming

Hopefully, I’ve shown you some interesting collections with something to catch your eye. Let us know of other engaging video game archives in the comments below or by tweeting us using our Twitter handle @DH_UNT. Hapyy gaming!