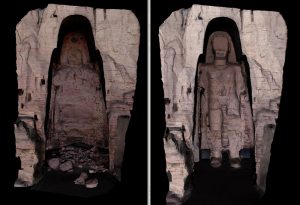 The site of a Buddha statue as it is today (left). The same site with a 3D model of the Buddha (right).

There is an old saying, “necessity is the mother of invention.” It is no less true in the field of digital preservation, digital humanities, and history. The great thing for me about history and library information science is how they inform each other, but also how they provide pathways to other areas of study. We have all watched in horror was cultural sites and materials have been destroyed by man, natural disaster, or the slow decay of time. Today though we have the technology, innovation, and cross disciplinary technique to try to preserve some aspects of these sites and materials separate from the actual object or physical location—digital preservation with 3-D scanning. 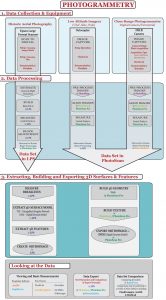 Graphic map of the photogrammetry process.

Famously the destroyed Buddhas of Bamiyan, Afghanistan have been recreated by a team with photogrammetry. Photogrammetry is a well-established way of acquiring geometrically dense information of a real world object (or site) in 3D. They were also recreated in 3D hologram by a Chinese couple, and this was met with celebration by the attendants to the 2 night event. It remains to be seen if the famed standing Buddhas will be resurrected, as it is up to the people and government of Afghanistan, as well as raising the money for such an ambitious project, which has been estimated by the Bamiyan Buddhas Project, to the tune of $30-50 million, USD. 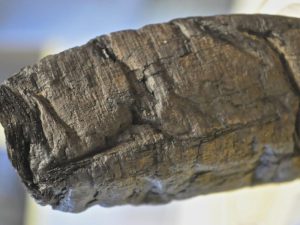 Closeup of a Herculaneum Papyrus scroll.

Photogrammetry is not the only technology that has been used to recover our past treasures. Some of the scrolls from the Villa of the Papyri at Herculaneum are too fragile to use more traditional techniques of preservation and recovery on. However, the use of XPCT (x-ray phase-contrast tomography) is providing new life and uses for these scrolls that while known about since 1752, have not been read since before the eruption of Mount Vesuvius in 79 C.E. It is amazing how technological innovation, digital humanities, and scholarly curiosity and tenacity is allow us to recover, preserve, and access our human heritage; and these are only a few examples.