Skip to main content
In my previous post on video games as therapy, I highlighted a few ways that people can engage with video games to improve symptoms related to a variety of medical conditions and circumstances. In this post, I explore some of the psychological benefits gamers can glean from this technology. 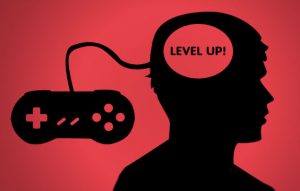 Benjamin Franklin’s words in his chess essay (chessay?) speak to some of the greatest positive outcomes that researchers have identified in gamers. Perhaps the most cited positive outcome is a gamer’s persistence in overcoming challenges, hoping beyond hope that they will succeed in their task. Researchers identify two different theories of abilities: entity theory and incremental theory. While entity theory arises from having our natural traits highlighted (hearing “You are so smart!” after doing well on an exam), incremental theory occurs from having our efforts highlighted (hearing “you studied hard for that test!”). If our efforts are highlighted rather than natural traits, researchers indicate that we will be more motivated to put in practice to improve our performance in tasks (Granic, Lobel, & Engels, 2014).   Game developers foster incremental motivation by balancing game difficulty to players’ ability levels and providing immediate task feedback. Players always have access to the resources they need to overcome the task at hand; the challenge rests in discovering how to best use these resources to seek victory. To use World of Warcraft as an example, this phenomenon could look like a group of 10 people (a raid group) fighting a boss who is almost too powerful to be defeated. However, if the party communicates effectively in timing their spells and cooperates in avoiding the boss’s attacks, then they can achieve a hard-fought victory. 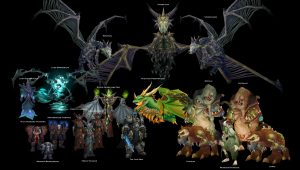 Some of World of Warcraft’s raid bosses included for context. Through the power of gaming, defeating fearsome undead dragons and flesh behemoths is within our grasp. (image obtained from WoW Wiki)

It usually takes several attempts of the entire group dying, talking about what happened (sometimes not without some emotional tension), and improving reaction times to environmental hazards until the group achieves success. What the group thought was previously insurmountable has now been conquered, and the individuals can carry this new motivation forward into future endeavors. Gamers can usually also see statistics such as how long the trial took, how much damage they dealt to opponents, and how many times their character died or attempted the trial. Players can use this feedback to aim for improved stats in the next trial. Ben Franklin was speaking to this incremental aspect of motivation when he spoke of “not being discouraged by present bad appearances in the state of our affairs.” For more detail on the subject, I direct interested parties to listen to game developer Jane McGonigal discuss how she utilizes this motivational aspect in her own games and research to solve real-world conflicts. So, there you have it! Playing video games can help people turn the impossible into reality. Researchers are currently studying how this “plays” out in real life, but we have already seen a positive correlation between amount of time spent playing strategic video games and school grades/problem-solving behavior. You may also be familiar with the wave of educational games specifically built with students in mind such as Carmen Sandiego, Math Blaster, and Reader Rabbit. Similar to how medical professionals have “game-ified” the recovery process for patients, educators realized they can tap into games’ reward systems to promote retention of knowledge for students. In my next post, I challenge the myth of the socially isolated gamer by discussing how games can improve our ability to develop empathy and form bonds with people across the globe.