1953 was a big year for paleontological finds near Denton. Excavation related to the construction of the Garza-Little Elm dam (Lewisville Lake) revealed many significant ancient remains. A Denton County Archaeology Society formed after the discovery of a mastodon tooth cap near Lake Dallas. Society members joined together to locate and save artifacts from inundation when the Garza-Little Elm dam opened in October 1953.

In early 1953, Ernest M. Calvert, Jr. discovered a mammoth’s bones protruding from a seven foot arroyo on his father’s farm, located five miles south of Denton. Calvert, Jr. contacted North Texas State College (NTSC)* about the find and permission was granted for NTSC students and faculty to spend Saturdays excavating the partial mammoth skeleton. NTSC professors Carl B. Compton (Art) and Dr. Elgin Williams (Sociology) and a total of fifty students excavated the mammoth using trowels and whisk brooms from February to April 1953. Members of the public were welcome to visit the dig site from 2:00 – 5:00 PM each Saturday.

The mammoth, a parelephas columbi, was estimated to be ten feet tall, twenty feet long, and two to three tons in weight when it died 10,000 years earlier. Examination of the mammoth’s teeth revealed it probably died young at about 70 years old (out of a potential 200 year life span). University of Texas archaeologist Dr. Alex Perry Kreiger rated the specimen the best discovered in Texas to date. R. K. Harris of the Dallas Archeology Society believed it to be the most complete skeleton in North Texas because it was exposed by natural erosion and not destructive construction equipment.

The Manual Arts Building (razed in 1974 and replaced by the current Art Building on Mulberry Street) was converted into a “cave room” to display the recovered mammoth bones, along with other exhibits “trac[ing] a chronological succession of county culture through the ages” (NT gets ‘Cave Room,’ Campus Chat, April 17, 1953). An Archeology Festival was established at NTSC in March 1953. The festival was timed to coincide with Fine Arts Week.

The Calvert farm mammoth was not the first or last to be discovered in the Dallas-Fort Worth region. A prior mammoth was uncovered in 1951 one and one-half miles southeast of the 1953 site and another in 2014, south of Dallas. 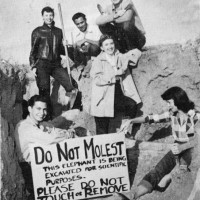 The NTSC mammoth excavation crew as pictured in the 1953 yearbook. 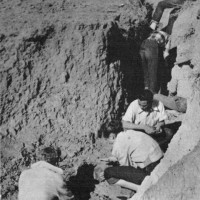 NTSC students excavate the mammoth. This photo appeared in the 1953 edition of NTSC’s yearbook, the Yucca.