The Denton Gay Alliance (DGA) was established in 1975 under the leadership of North Texas State University (NTSU) student Ruben Salinas. On March 12, 1976 Salinas asked President C. C. Nolan’s Cabinet to formally recognize DGA as a campus organization. The Cabinet denied the request on March 23 because DGA was partially composed of non-student members, a barrier to official recognition. The DGA operated as a campus social chapter for a few more years but fizzled out after Salinas graduated and left Denton.

In October 1976 an NTSU student calling himself “MWF” wrote a series of letters about his life as an out gay man to North Texas Daily editor Terry Pair. MWF’s letters captured a young man struggling with his sexuality and public identity. The anonymous author admitted he’d contemplating suicide and closed one letter with “Don’t tell me about the well-adjusted gay.” DGA and an unidentified gay NTSU professor responded to MWF’s letters in the November 24 issue of the North Texas Daily to encourage MWF and other “maladjusted homosexuals” to seek help. The DGA used their editorial to rebut the NTSU President Cabinet’s refusal to formally recognize the DGA earlier in the year. After identifying MWF as “the kind of person the [DGA] was formed to help, but has been unable to reach,” the DGA authors encouraged the NTSU administration to re-read the MWF letters, claiming MWF’s “case is a perfect example of why the DGA is needed at NTSU.” A final round of despondent MWF letters (apparently written well before the editorials in response) were published in the December 1 North Texas Daily. Editor Pair suggests, as in his original article, that MWF might have been a prank but acknowledges that “nobody in our culture” understands “how gays can blend into American society.”

The first meeting of the Gay/Lesbian Association of Denton (GLAD) was held August 29, 1979 in a private home. The attendance at the first meeting was a modest seven people but soon as many as 200 people were attending events advertised in the “Notepad” section of the Denton-Record Chronicle.

Today the predominant campus organization for students who identify as gay, lesbian, bisexual or transgendered is GLAD: UNT’s Queer Alliance. The organization, which claims a membership of 300 on their website, maintains a Facebook and Tumblr page, along with Instagram and Twitter accounts. On October 10, 2014 GLAD celebrated National Coming Out Day (nationally observed on October 11) by asking the campus community to sign a door installed temporarily on the Library Mall.

On October 11, 2013 UNT opened the Pride Alliance, a resource and training center for GLBTIQA students and their allies. On the occasion of the Pride Alliance’s opening, vice president for institutional equity and diversity Gilda Garcia said, “All of us can take pride in the fact that this will be the first time UNT has a university-sponsored, designated meeting place for LGBT community members.”

With any luck, now that UNT is better equipped to support LGBT students, no UNT student will again feel the despair and isolation expressed by MWF in 1976. 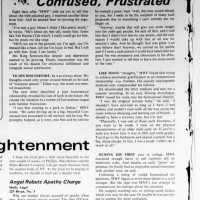 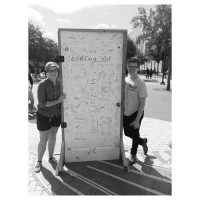 In celebration of National Coming Out Day (October 11) members of GLAD asked community members to sign a door installed temporarily on the Library Mall. 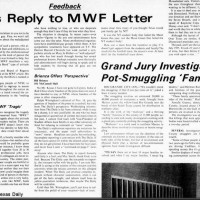 One Response to “The History of LGBT Organizations at UNT”