The Rock Bottom Lounge opened in the North Texas State University Union Building in 1976 as a restaurant and nightclub for university students. Featuring a nightly happy hour which included beer, wine and a full dinner menu, students gathered nightly to enjoy live music from local acts, including UNT music students in the jazz lab bands.

The beloved campus club was almost closed after underage students were caught drinking. In 1984 students under age 19 were not allowed in the nightclub after 8 pm. previously underage students had been admitted if they agreed not to drink. However, later in the evenings the students were usually spotted drinking beer or wine. On a typical night between 100 and 300 students came to the Rock Bottom Lounge.

Music in the Lounge was a reflection of the time and tastes of the students. When the club opened it featured a regular “Disco Night.” By the mid-1980’s the nightclub featured new wave music, DJ nights and a “Club RBL” night modeled after new-music clubs in Dallas like the Club Clearview and Club Da-Da.

The Rock Bottom also featured stand-up comedy, and hosted local performers as well as nationally known comics such as Elaine Boosler, who appeared in the Lounge in 1988. Students were also invited to tell their favorite jokes at Amateur Comedy Night every Tuesday in 1986.

Although the Rock Bottom Lounge was closed in the early 1990’s many former students still have fond memories of drinking, dining and listening to music at the club. These photos from a Halloween party in the lounge in 1979 are just one example of the many memorable nights at the Rock Bottom Lounge. 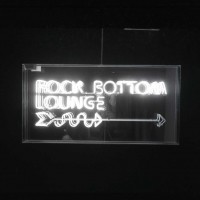 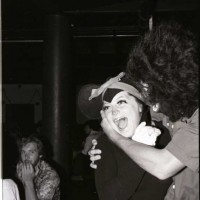 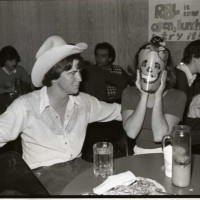 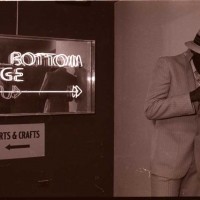 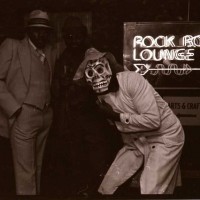 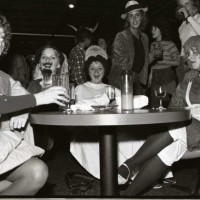 One Response to “The Rock Bottom Lounge”