Abner Haynes and Leon King became symbols of “North Texas integration and ambassadors of good will” in 1956 when they were the first two African-American football players to play for the University of North Texas football team.

Abner Haynes grew up the son a well-known Denton minister and attended Lincoln High School in Dallas where he became friends with teammate Leon King. North Texas State College (NTSC, now the University of North Texas) had integrated several years before but had no black athletes. NTSC President James Carl Matthews told Coach Odus Mitchell that any African American students who showed interest in the football team should be given a fair chance. Haynes and King were given a tryout and awarded a half scholarship at North Texas to play on the freshman football team. They were not allowed to live on campus, or eat in the dining halls for the first two years they were at North Texas, in spite of the fact that female African American students had been allowed to live in the dorms and eat in the dining halls for the last two years.

The pivotal event that cemented them as a team was when they faced overt racism during their second game of the 1956 season against Navarro Junior College in Corsicana. As Haynes said later, “We were scared to death, but that team became a family that day in Corsicana.” Before the game they went out to eat at a restaurant and King and Haynes were told they had to eat in the kitchen. The team stood behind them and said they would not eat there unless they could eat together. They ended up eating baloney sandwiches, and the restaurant was out of the price of their meals that they had prepared in advance for the team.

When they arrived at the game the crowd was hostile, yelling racial epithets and death threats, not just against the black players, but also against their white teammates for allowing them to play. This hostility spurred the team into playing harder, and North Texas tackle Joe Mack Pryor went out of his way to knock down any other player who treated the two black players badly. They defeated the favored Navarro 39-21, with Haynes running four touchdowns and King catching a pass for a score. At the end of the game Coach Ken Bahnsen told the bus driver to park close and ordered the players to run for the bus as soon as the game ended. The white team players surrounded King and Haynes and ran to the waiting bus.  Haynes said in a later oral history interview that the angry crowd did them a favor because it brought the team together and if it hadn’t happened the team players might have fought among themselves. In his own oral history King said, “We became blood brothers…What affected one of us, affected all of us.” 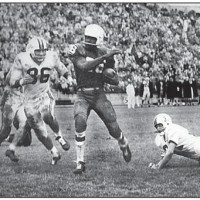 Abner Haynes running down the field with the ball. Photograph from NT Daily, February 13, 2004. 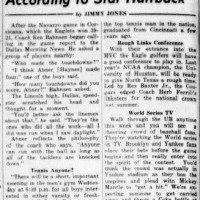 This newspaper article is the only contemporary mention in NTSC’s newspaper, The Campus Chat, of the Corsicana game. Abner Haynes reveals a good sense of humor giving the linemen all the credit, and downplaying his own role in leading his team to victory. Newspaper article, “Lineman do Hardest Work,” from The Campus Chat October 5, 1956 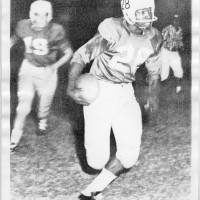 Photograph of North Texas running back, Abner Haynes, number 28, running with the ball in a 1958 game. 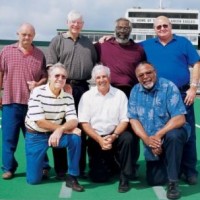 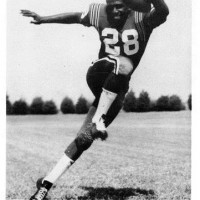 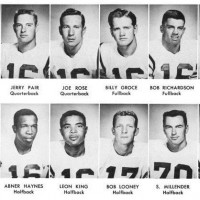 Picture of some of the NTSC football team members from the 1959 Yucca. King and Haynes can be seen in the middle of the bottom row. 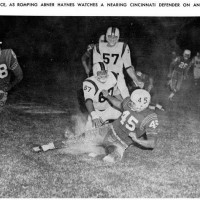 Abner Haynes made a 51-yard runback on the kickoff against Cincinnati. This picture is from the 1959 Yucca.

One Response to “Abner Haynes, Leon King, and the Corsicana Incident, 1956”