Francis Edwin Stroup attended North Texas State Teachers College from 1925 to 1929, when he earned a degree in Health, Physical Education, and Recreation. During those 4 years, Stroup lettered in basketball, ran track, and played football. He was also an accomplished swimmer and diver. Besides his athletic talents, Stroup came from a family known for their music, and he began writing music for fun as a student at NTSC.

After graduating in 1929, Stroup landed his first teaching job in Golden, Texas. In 1939, Stroup had moved on to other teaching jobs in the Denton area, including working on campus as a swim coach.

One Saturday night, Stroup attended the movie and Stage Show on campus. During the stage show, Floyd Graham, known as ‘Fessor Graham, announced a contest for a marching song. The contest was for the lyrics to match a melody Graham had composed a few years earlier. It was normal for a small college to adopt a well-known tune and provide the words in order to enhance spirit and school identification. For example, North Texas, along with Harvard, Rice and others adapted FE Bigelow’s “Our Director March” as a spirit song, with each college providing unique identifying words. However, Graham envisioned NTSTC with its very own song and hoped the 1939 contest would provide one.

At the time Stroup had been out of school for a decade and during that time he had been writing songs. Stroup entered his song after a couple of weeks of other entries being sung. One night his song was played with a band arrangement by Gene Hall. After the band finished, Graham stated, “Can’t you just imagine the band marching down the field playing that.” Stroup thought: “Oh, boy, I think he likes it.”

Stroup landed another job teaching swimming at the college that summer. He would not hear any news about the song contest until the fall semester when he received a letter from the summer symphony conductor Robert “Bob” Marquis, Jr. that announced his song had been chosen. The lyrics to the new song, called “Fight, North Texas,” were:

Let’s give a Cheer for North Texas State,

Cheer for the Green and White.

Victory’s in store but what e’er the score.

Shoulder to shoulder, they march along,

Playing the game for the honor and fame

Of North Texas State and you.

Men with a purpose true

After the song was adopted, the funds raised from the publication were used to help build the Student Memorial Union. The new fight song was played at the football games after every extra point and every successful field goal.

The 1940s was a time of profound change for Stroup. He left Denton in the 1940s to serve in the Army during World War II. He also mourned the loss of his mother and brother during this decade. By 1950, Stroup was Assistant Professor of Health and Physical Education for men at Wyoming. From 1959 to 1974, Stroup worked at Northern Illinois University, as the Physical Education Professor. Stroup continued to write songs, responding to an appeal from the editor of Northern Star Student Newspaper. The appeal asked for a new version of A. Neil Annas’ original NIU classic “Loyalty Song.” Stroup answered by rewriting of the chorus of “Loyalty Song” with new lyrics. The Star published the song in November 17, 1961. The Student Senate adopted the song on April 30, 1963.

During his employment at Northern Illinois University, Stroup wrote the fight song of the University of Wyoming using the version of “Ragtime Cowboy Joe” in 1961. “Ragtime Cowboy Joe,” was a popular song, written by Grant Clarke and composed by Lewis F. Muir and Maurice Abrahams. It was published in 1912. Stroup rewrote the chorus.

In 1989, on the 50th anniversary of the adoption of “Fight, North Texas,” Stroup helped revise the lyrics after the name of the school changed to the University of North Texas. With the thousands of alums who knew the original words in mind, Stroup was compelled to keep the changes to a minimum. The new and current lyrics to the fight song are:

Let’s give a cheer for U of NT
Cheer for the Green and White!
Victory’s in store,
Whate’er the score,
Our teams will ever
Fight, fight, fight!
Shoulder to shoulder
We march along,
Striving for victory.
Playing the game for the honor
And fame and glory of UNT!
U… N… T… Eagles!
U-N-T Eagles!
Fight! Fight! Fight! 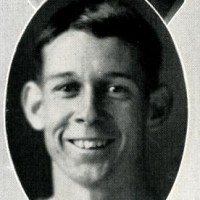 An image of Stroup as a basketball team member from the 1929 Yucca student yearbook. 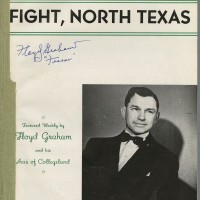 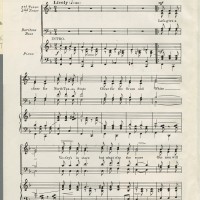 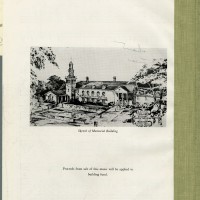