From 1949 to 1952 the North Texas Golf Team accomplished a string of wins at the NCAA Championships, defeating larger schools with more established golfing programs. The four man team won this golf tournament for four years and put larger schools on notice that the Eagles competed to win. The team’s winning streak placed them alongside schools like Yale, Princeton, and University of Houston, where each school’s team won more than three tournaments in a row.

A large part of the success of the golf team was due to the thoughtful coaching of Fred Rayzor Cobb. Coach Cobb originally joined North Texas State Teachers College as an assistant football coach in 1940. He began working with the golf team that same year. His golf teams would go on to win all three of the major college golf tournaments: the National Collegiate Athletic Association, the Southern Intercollegiate, and the Rocky Mountain Collegiate.

Cobb was noted for not giving lessons in golf to his players. He would watch them from a distance, usually on the clubhouse hill, with a pair of binoculars. Then he would have a quiet word with them after the practice to provide advice and correct their mechanical faults.

In 1945 Coach Cobb was instrumental in setting up golf as a major sport for North Texas. The UNT golf program took off with the purchase and development of a nine-hole golf course. The course was located on a tract of land formerly known as Highland Park. In the 1890s this was a favorite spot for the citizens of Denton to hold picnics. By 1907 a street car system was installed and the line terminated at Highland Park. This was a tremendous aid in moving the citizens out to this area for recreational gatherings. One such event took place in June 1912, when over a thousand people gathered in the park to watch an exhibition of airplanes over Denton. Later the site was used as a training ground for soldiers in World War I and World War II and as a golf course for the rehabilitation of returning soldiers.

The construction of a Golf Club House was started in 1946 and the facility opened in 1947. The structure was approximately 84,707 square feet. It was a one and a half story structure with a glassed in solarium that faced southwest. Built on a hill, the structure overlooked a three acre lake. The famous Texas golfer Byron Nelson took part in the dedication ceremony for the building.

In 1949 the golf team took part in the NCAA meet in Ames, Iowa. Previous NCAA competitions had not gone well for the Eagles, with tenth place finishes their unfortunate outcome. The teams favored to win the 1949 event were Purdue and The University of Texas. However, the Eagles won by ten strokes. The team members were L. M. Crannell, Jr., Gene Towry, Captain Palmer Lawrence, and Buster Reed. When asked by a reporter for the Denton Record Chronicle what the biggest thrill of the tournament was, team captain Palmer Lawrence replied, “Showing the ‘big’ boys what North Texas State can do.” The North Texas win was the first time a Texas team had won the 52 year old tournament. 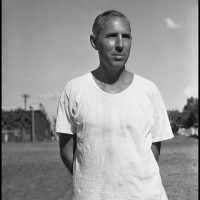 UNTA_U0458-092-217-03 Coach Fred Cobb is remembered as the man who established golfing as a major sport at UNT. He guided his players to four NCAA golfing championships. 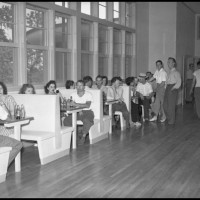 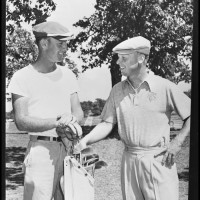 UNTA_U0458-095-429-03 Both Don January and Billy Maxwell, seen here as students, would go on to professional golfing careers. 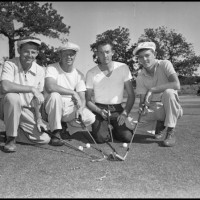 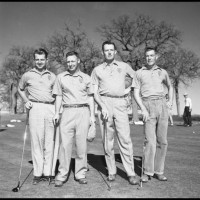