Skip to main content
Contributed by: Maristella Feustle Music Special Collections Librarian Willis Conover’s correspondence in the mid-1930s with horror/sci-fi writer H.P. Lovecraft is well known in sci-fi circles thanks to the book Conover published in the 1970s, Lovecraft at Last. The original letters in Lovecraft’s own handwriting reside in the UNT Music Library’s Willis Conover Collection, alongside the hundreds of boxes of recordings and papers related to Conover’s career as a jazz broadcaster, for which he is best known. 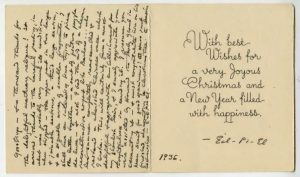 a Christmas card from H.P. Lovecraft to Willis Conover, 1936

The correspondence between a teenage Conover and Lovecraft, whose imagination gave us the Necronomicon and Cthulhu, show Conover as a talented and ambitious young writer, who was seeking writers to contribute to his Science-Fantasy Correspondent. The Correspondent was what would nowadays be called a “zine,” a self-published periodical from a community of people with common interests. Thus, while Lovecraft is the best known of Conover’s correspondents, and he did contribute a story to the Science-Fantasy Correspondent, the question remains of who else Conover corresponded with. Was Lovecraft a lucky shot in the dark, or part of a broader pattern of correspondence? That question brings us to the premise of this blog posting: With how many other prominent writers did young Willis Conover correspond? There are many possible measures of prominence, but to be published in Weird Tales in the 1930s was one indicator of having “arrived” in this community, as even young Conover himself eventually landed an original poem in the May-June issue of 1940. Conover’s collection includes a comprehensive run of Weird Tales, so it is reasonable to suppose he corresponded in particular with Weird Tales authors. 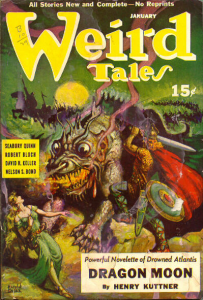 Fortunately, WikiSource has a complete index of Weird Tales issues, with one page for each year. Thanks to the consistency of the presentation there, OpenRefine allows us to import those lists, separate them into columns based on the “•” divider, and thus isolate the authors’ names and order them according to how many times their names appear, using the Text Facet function. We have effectively taken a haystack, parsed out the needles we wanted, and ordered them in a way that is useful. Even if the WikiSource list were less consistent, the Word Facet function would isolate surnames for comparison. In addition, the Cluster function made it easy to merge different renderings of names that were clearly the same person, such as “August Derleth” and “August W. Derleth.” 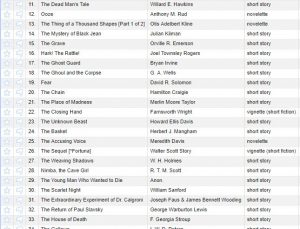 Listing split into columns in OpenRefine 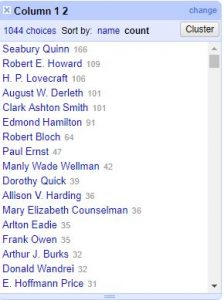 This information gives immediate insights into who the most prolific authors were for Weird Tales, and who were comparatively outliers. Likewise, importing a list of correspondents from Conover’s collection in the Music Library — a second haystack, of sorts — allows for the comparison of names between the lists, to find that young Willis Conover corresponded with a panoply of authors. We have evidence of this fact in his collection because these authors thought enough to write him back between October, 1935 and February, 1937, after which Conover handed on the editorship of Science-Fantasy Correspondent to Corwin Stickney and became an associate editor of Robert Madle’s Fantascience Digest.  The corresponding authors’ approximate number of contributions to Weird Tales are in parentheses.

H.P. Lovecraft (126, some under pseudonynms)

In a 1933 letter, Conover’s father, Willis Conover, Sr., tells his son, “I must say that you are some letter writer.” Just a few years later, Willis Conover, Jr. would prove how true that observation was. Conover the writer was overshadowed by Conover the broadcaster, as Conover left his work as an English major at Salisbury State Teachers College after one year to be a radio announcer. However, Conover continued to write prolifically for the rest of his life, including newspaper and magazine articles, liner notes, song lyrics, and puns and limericks to amuse himself. Therefore, understanding Conover as a young writer lends important context to his career in radio which followed. 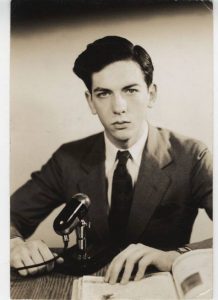 Willis Conover in the late 1930s