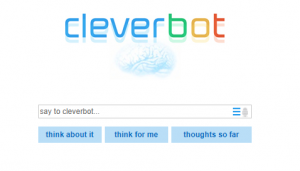 Any avid internet user or enthusiast is sure to have seen of, heard of, or interacted with bots in their time between looking at memes and cat videos. Maybe even during. (CleverBot) Bots are more widespread and impactful in internet spaces than ever before. And this is especially true on platforms like Twitter, which provide easily accessible APIs to work with to create these bots. This post is the beginning of a new series on Twitter bots, why these bots are important, and even how to make your very own Twitter bots at home. Here, we will outline some of the origins of bots and how they have developed into more modern and complex programs. Moving forward, we will identify different types of Twitter bots, along with their strengths and weaknesses, and detail different ways to create and maintain your own Twitter bots. So, let’s get started!

In the beginning, there were video games…

One major origin of publicly accessible bots is in online gaming, specifically MMORPG’s. One of the major forms of MMORPG bot is that of gold bots. There are certain tasks in these games that often yield small amounts of in-game currency. Typically, this is something along the lines of cutting down a tree and selling the resulting wood to in-game NPC’s (Non-Player Characters). Making simple weapons or armor to sell or killing early level enemies are other examples. The bots work by running code to make your in-game character complete these tasks without your interference, garnering large amounts of gold over time. The basic idea is that the program runs, making your in-game character run around auto-completing its task, and gaining small amounts of gold over extended time as you go on about your day. From these examples, we can form a general definition to the term bot. We can define a bot as a computer program performing some automated function in an online setting. The biggest advantage of this definition is that it allows the term bot to be universally applicable within the Internet, which is fitting since bots exist in many Internet spaces and contexts.

To narrow our scope, Twitter bots specifically perform actions on Twitter. Here, the possibilities become endless. Instead of killing off some in-game enemy, a Twitter bot can generate and post text, upload images, retweet other posts; pretty much anything you can think of doing on Twitter, a bot can do that. And probably more. At first, this doesn’t seem like anything that mind-blowing or innovative. And without the additional access provided by today’s internet, it’s really not that amazing. Early Twitter bots weren’t very impressive, to the extent that it’s difficult to find examples of “average” bots in the history of Twitter. There is, however, @Horse_ebooks. This account started in 2010 and was originally a spambot designed to sell, well, ebooks about horses. However, Twitter has spam filters and monitors in place to prevent such accounts. To get around these filters, an account would need to make certain “normal looking” posts between links to outside content. @Horse_ebooks did this by applying Markov chains (which we will discuss later) to generate text from their online books and then tweeted these between the links to ebooks. This resulted in the generation of some very interesting, if not poetic, posts, (Horse_Ebooks Posts) making the account go viral. Unfortunately, the account was later revealed to have been run by a human starting sometime in 2011. This raises some interesting questions about what spam is and how we interpret it, (Is spam the native art form of the internet?) but for our purposes, @Horse_ebooks primarily marks the beginning of the success and popularity of Twitter bots.

Nowadays, Twitter bots can do just about anything. And I mean anything. From digital artistry to politically minded to anything you can think of, there’s a Twitter bot for it; and if there isn’t, you can make it yourself. These bots do everything from sorting the pixels within an image, to tweeting out helpful self care reminders, to posting pictures from the Metropolitan Museum of Art, to generating random internet memes, to reconstructing Donald Trump’s tweets into the format of press releases, and on and on and on. There are endless swaths of interesting or engaging Twitter bots. But it’s not enough for these bots to just be interesting and engaging. They also need to be impactful, in ways beyond just breadth and reach. In essence, these bots are worthless if they do not in some way make commentary on our human experience and understanding. Without this, these bots have no meaning. The bots I have linked to here, as well as many others, explore complex ideas around digital artistry, humanistic efforts, digital documentation of artifacts, sociological exploration, political commentary, and many others. They raise questions about who we are as people, what kind of ideas we put out into the world, whether or not these ideas are uniquely our own or simply the result of some complex underlying algorithm within our minds. They make us question some aspect of our existence and scope.

A bit of a dark turn

It is important to note that not all bots are used for positive humanistic purposes. One of the biggest instances of this is the recent Russian Twitter bot interference with the 2016 U.S presidential election. Waves of Twitter bots were shown to be posting in rapid succession, all using the same pro-Russian or anti-Hillary hashtags. Investigations into the breadth and impact of this issue are still ongoing, as it is difficult enough to prove an account is a bot, let alone if its origin is Russian. But one thing is certain: bots almost definitely played a major role in at least attempting to sway last year’s election. And it isn’t like this is some difficult thing to pull off either. You can buy your own swarms of Twitter bots, into the millions, and make them do whatever you want, malicious or otherwise. Which means that this is far from the last time we’ll be seeing stories about things like attempts to sway public opinion in an election. Just thinking about the kinds of influence you can make with literally thousands of fake users all under your direct control is terrifying.

Let’s wrap this up 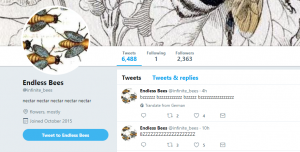 So this is the double-edged sword of bots. They can be a tool to create and inspire, to simplify and automate your Twitter feed. Or they can be used as a tool for manipulation and misinformation. This is why we encourage you to make your bots with careful thought. What are you really saying with your bot? Who will be affected by it? What are you accomplishing by making it? This isn’t to say that simple or silly bots like @infinite_scream or @infinite_bees shouldn’t be made. They absolutely should. Just be careful and think through the impact of what you’re making. Let us know about your bot ideas! And if you make them, be sure to tweet them at us over on our Twitter, @DH_UNT. We look forward to seeing what creative things you can come up with. Be sure to follow us to see some of the major types of Twitter bots and how to make them. via GIPHY