After a successful 2017 media preservation project in Denton County, “Spotlight on North Texas,” is returning on May 19th, 2018 to preserve the motion picture histories of Dallas, Texas. 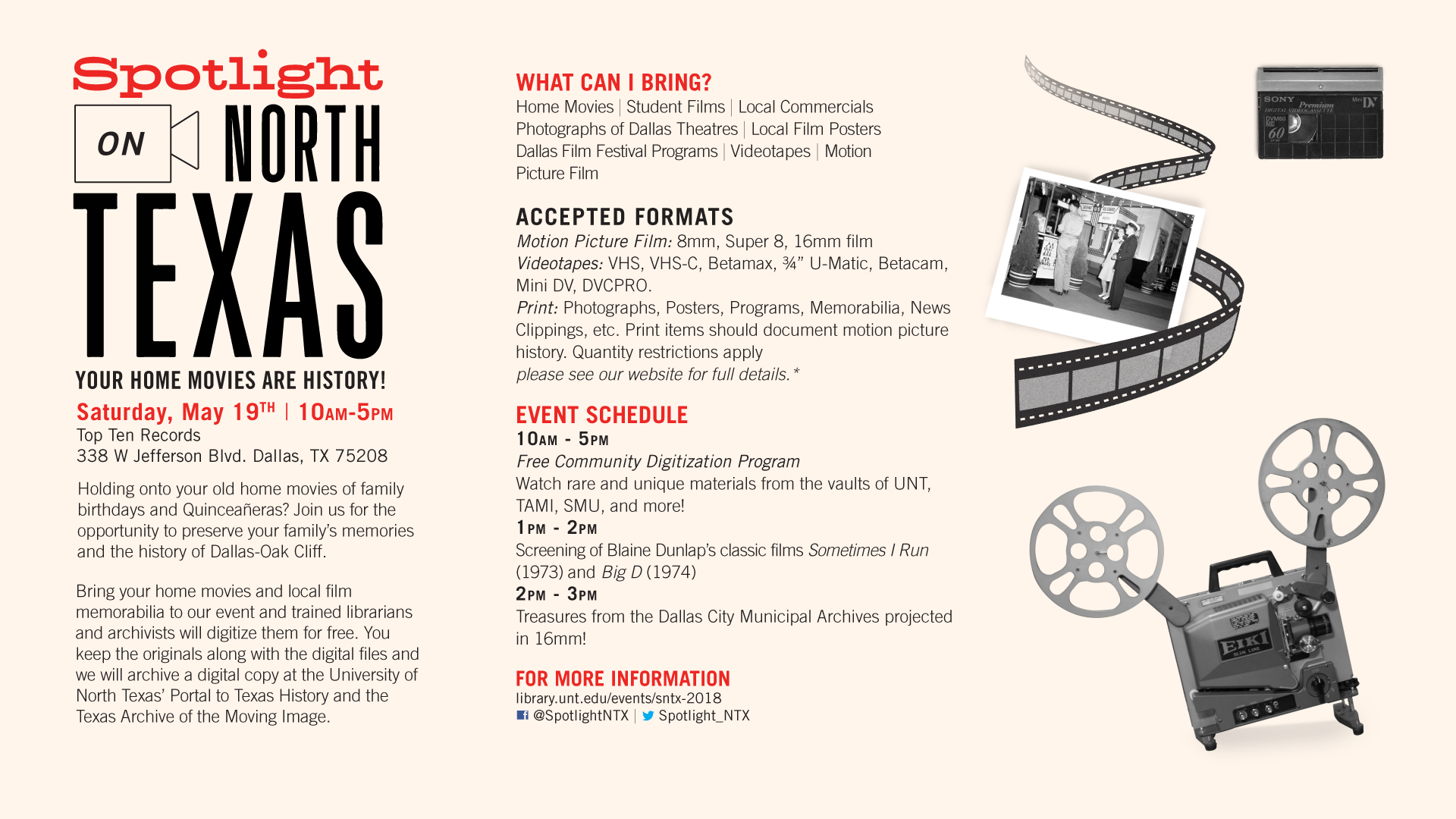 Spotlight on North Texas is a community media preservation partnership between the UNT Media Library and the Texas Archive of the Moving Image and is funded by  Common Heritage Grants from the National Endowment for the Humanities. Through free community digitization and outreach events, this project seeks to preserve and provide enduring access to the motion picture histories of North Texas. By “motion picture histories,” we mean motion pictures that document history such as home movies or student films and materials that document motion picture history, such as materials related to the long history of movie production, distribution, and presentation in Dallas. We hope that this program will highlight the importance of incorporating new voices into archives through the lens of community-created regional motion picture histories. By providing free digitization services and unrestricted digital access to these materials, we hope to expand the historical record and the variety of available primary source materials for a diverse audience.

In our 2016-2017 event in Denton County, we were able to digitize 33,000 feet of motion picture film and more than 100 hours of videotape as well as photographs, documents, and sound recordings. Program participants from 33 households and 13 cities received free copies of their materials and 697 items are now described and available for viewing on The Portal to Texas History.

Dallas, Texas: The Hollywood of the Southwest?

By collecting and sharing the moving histories of Dallas-Oak Cliff, this project hopes to deconstruct popular beliefs surrounding coastal primacy in motion picture arts and to redefine how regions like North Texas contributed to film production and consumption. The most famous home movie, and likely Dallas’ most notorious film, is Abraham Zapruder’s recording of the 1963 assassination of President Kennedy. However, Dallas has been a significant presence in the industry since the inception of moving pictures. In the early days of cinema, distribution and production were highly regional and Dallas was known as the “Hollywood of the Southwest.” Downtown Dallas was once the center of our region’s motion picture distribution industry including Paramount Pictures, United Artists Theaters, RKO, Columbia Pictures, and Universal Studios. Dallas also claimed its own independent artists and filmmakers as well as a thriving educational and advertising film market, including the prolific Jamieson Film Company (est. 1916) and The Stokes Group (est. 1965, formerly Bill Stokes Associates). Dallas was also the home for numerous motion picture theaters and star-studded movie premieres and publicity stunts. The first permanent motion picture show opened in 1905 and by 1913 the Dallas Morning News estimated that approximately 1/3 of Dallas residents would attend a movie each day. Oak Cliff was the home of many neighborhood theatres, including The Texas Theatre, which continues to show movies and host community events.

On Saturday May 19, 2018, we will be taking our program to Top Ten Records in the Oak Cliff neighborhood of Dallas, Texas. The area’s oldest record store (1956-2017), Top Ten is preserved by a local non-profit that is working to create a media and music library that also supports regional moving image preservation.

How to Participate in the Free Community Digitization Program

On Saturday May 19th from 10 a.m – 5 p.m., community members can bring home movies, student films, and local television commercials as well as photos and print materials related to Dallas motion picture history to Top Ten Records for evaluation by trained archivists and librarians from the University of North Texas and Texas Archive of the Moving Image.

Print materials and photographs will be scanned onsite. Participants will leave with digital copies of their materials on a free flash drive and keep their original materials.Archivists will digitize the film and videotape after the event and original materials will be returned at no cost to the participant. UNT and TAMI will preserve a digital copy of the materials, which will be available on The Portal to Texas History and TAMI’s  online archive.

To qualify for free digitization, film, and video must:

To qualify for free digitization, print materials must:

We regret that we cannot accept:

One Response to “Spotlight on North Texas: Preserving the Motion Picture Histories of Dallas, Texas”