The Dallas Morning News reported in 1913 that approximately 1/3 of Dallas residents would attend a motion picture show each day, that there were nearly 50 theaters showing “moving pictures or photoplays,” three large film agencies distributed films, and more than one plant for the production of motion picture film. According to the paper, the first moving picture shown in the city was the Fitzsimmons and Corbett fight, shown first at the State Fair in the fall of 1897 and later on open-air screens at Main and Lamar Streets. The first permanent moving picture show, The Theatorium (known as the Dixie in 1913), opened in July 1905 on North Elm and faced fierce competition in no less than one month. In the next century, numerous Dallas movie theaters would open, undergo renovations and new ownership, and ultimately close as theater presentation technologies advanced and consumer preferences changed.

Oak Cliff was the home to a number of neighborhood movie theaters, which served as places of entertainment, education, and sometimes religious worship . According to The News, the first actual “neighborhood picture show, or a picture show in the residence districts” was the open-air theatre T. P. Finnegan’s ran at Ninth and Lancaster in Oak Cliff in the early 1900s.

Unfortunately, there are few publicly available still or moving images that document the glory of these movie houses and their role in the Oak Cliff community.

If you have photographs or home movies that feature Oak Cliff movie theatres, please bring them to the “Spotlight on North Texas” digitization event at Top Ten Records on Saturday May 19th. At this community event, you will receive free digitization and preservation services and become part of Oak Cliff film history!

The Arcadia Theater opened on Greenville Avenue in 1927 and featured a mediterranean garden themed interior and iconic tree stump sign. In the 1970 and 1980s it transitioned into a Spanish-language movie house before becoming a music venue and nightclub. More than one fire occurred at this site in its nearly 80 years of operation and it was unfortunately destroyed by fire in June 2006. 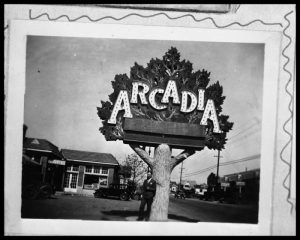 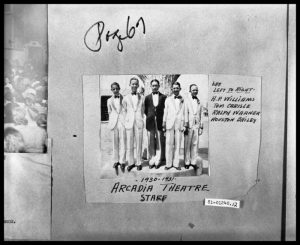 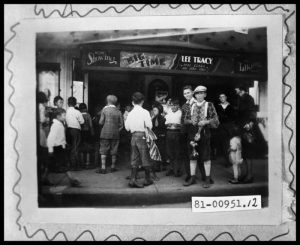 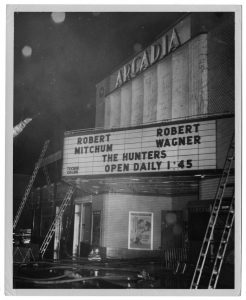 Additional photographs of the theater before and after the fire are available on Cinema Treasures and  Cinema Tour.

The Cliff-Queen opened in 1914 and was operated by W. J. Shivers and other operators over the next several decades, including Gene Autrey Enterprises in 1946.  The theater closed in early 1950 and was vacant until it was demolished in 1958. One of the few images I’ve found is available on Cinema Treasures.

One of Oak Cliff’s first motion picture theatres, The Texas Picture Theatre, also hosted sermons from local churches. It appears that it was renamed the Bluebird Theatre in around 1922. The building later became a commercial space and is now a training space for the performing arts, The Bishop Arts Theatre Center. 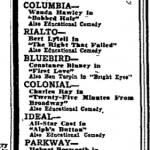 Move listings including the Bluebird from the October 1922 Dallas Morning News. 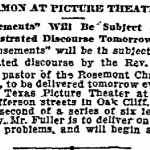 Sermons are held at the Texas Picture Theater, as seen in the Dallas Morning News from January 09, 1915.

When it opened in 1919, the Rialto was part of the Foy’s Neighborhood Theater chain. In the 1930s, it was renamed the Bishop Avenue Theatre and then the Astor in 1937. After the Astor closed, it was briefly a nightclub. The building remains as a commercial business space. The below photographs and more are available on Cinema Treasures. Check out Gayla Brook’s article from The Advocate about Martin Weiss who paid for the construction of the theatre. 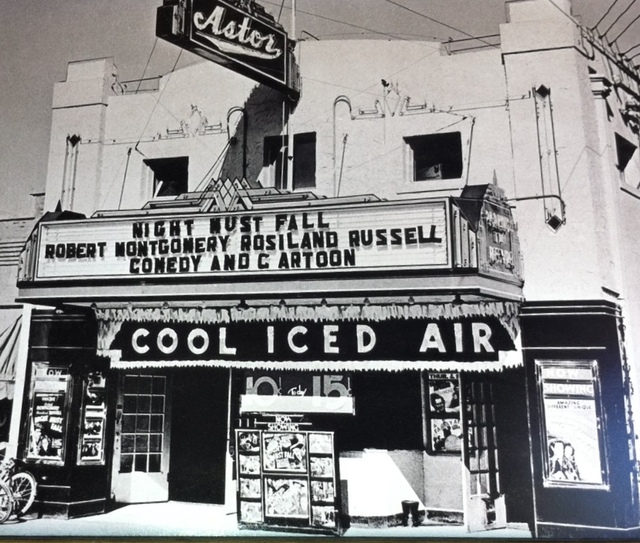 Photographs of the theatre and current space area available on Cinema Tour and Cinema Treasures.

The Rosewin was opened in 1922 and operated by C. R. “Mac” McHenry. The theater remained in operation until November 1963 when it was dropped by Rowley United. As an independent company, the theatre was renamed Rex Cinema and reopened in 1964 as an arthouse. The Rex then became an adult theatre until it closed in 1976. The building was later demolished. Photographs of the theatre are available on Cinema Treasures.

The Bevelry Hills Theatre opened in 1944 as part of the Beverly Hills Shopping Center on West Davis Street. This 1944 photograph of The Beverly Hills and others are available on Cinema Treasures. 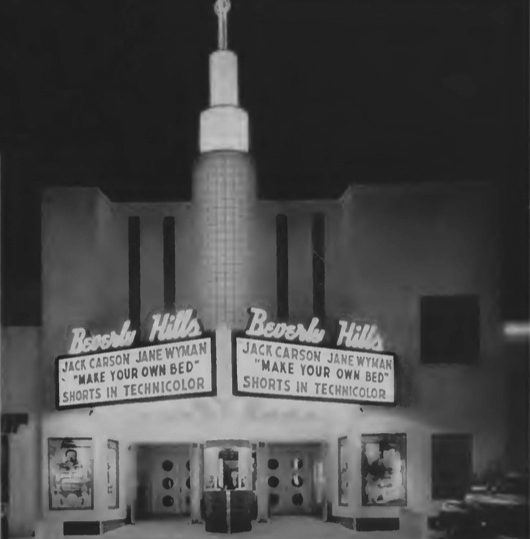 The Vogue Theatre was built on the site of the demolished Bison Theatre near Sunset High School. The building remains as a church. 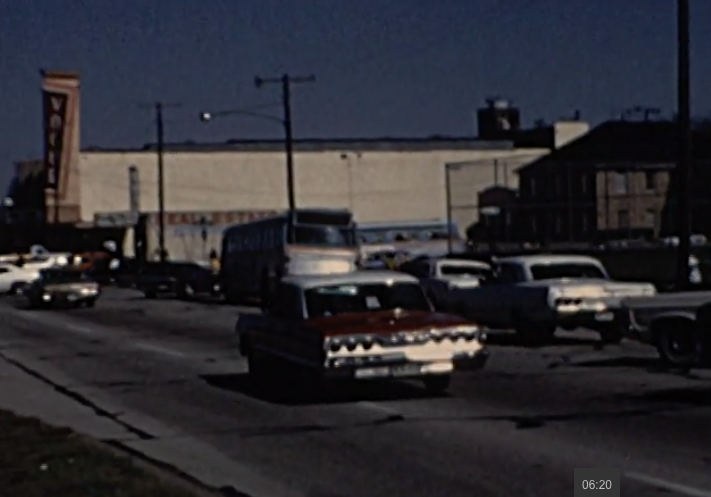 Additional photographs of the building are available on Cinema Treasures and Cinema Tour.

The Wynnewood Theatre in The Wynnewood Shopping Village, “Oak Cliff’s newest and most beautiful family theater,” opened with a gala on July 3, 1951. The theatre became a dollar house in 1983, closed in 1948, and demolished in around 2000.

Opening of the Wynnewood Theatre as seen in the July 01, 1951 Dallas Morning News.

We don’t have much information about the opening, close, or demolition of the Stevens Theatre, but we do know that it was in operation in the 1950s. According to the below 1958 news story from WBAP, the Stevens Theatre was closed for 6 months in 1958 and reopened on July 3rd under the management of two Dallas teenagers, Don Shaw and Gary Gilliland. 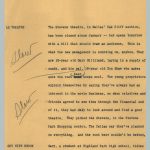 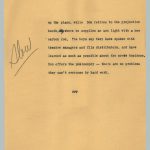 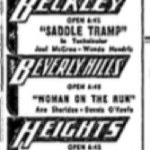 A listing of Oak Cliff Theatres in the February 21, 1951 Dallas Morning News.

Demolition or Current Use: Unknown

We don’t have information about this theatre, other than the address and photograph we found on Cinema Tour. 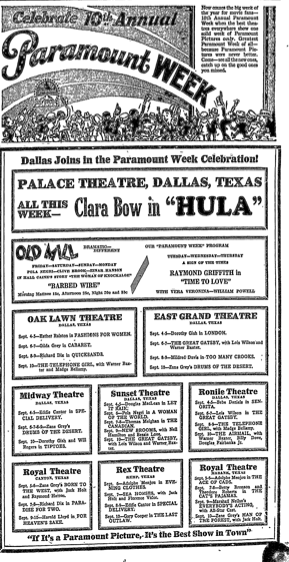 This is only an abbreviated list and brief description of the movie theatres that once existed in Oak Cliff. Noticeably absent is the Texas Theatre, which we’ll explore in a later post.

We’re grateful to the other resources about Dallas movie theatre history, many of which go into much greater detail about the theatre’s history, architecture, and motion picture technologies. We encourage you to continue your exploration by looking at the articles written by Gayla Brooks for the Oak Cliff Advocate, Dr. Troy Sherrod’s Historic Dallas Theatres book from the Arcadia Images of America Series, and the various postings on Cinema Tour and Cinema Treasures.