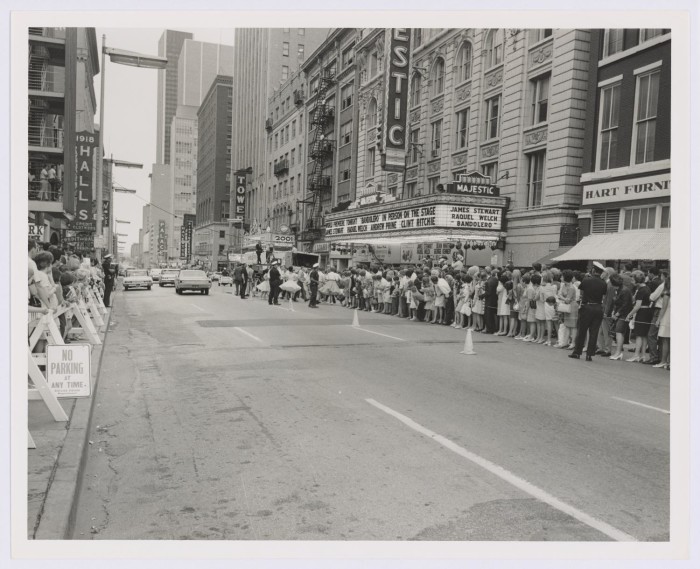 “‘Bandolero’ is a contemporary western, filled with action, a good deal of violence, some humor, and a good, healthy, woman-meets-man situation. It is not hoked up with Freudian overtones or ludicrous situations. The picture is told in a smooth but slightly off-beat way.” – Dallas Morning News

Bandolero (1968) is the tale of Mac Bishop, who saves his outlaw brother Dee from hanging for the murder of a wealthy rancher and subsequently flees to Mexico with Dee and the murdered rancher’s widow. Although principal photography began in Arizona, significant location shooting took place in Bracketville, Texas at the film set built in the 1950s by J.T. “Happy” Shahan for John Wayne’s Alamo. The director, Andrew McLaglen (Shenandoah, The Rare Breed, The Devil’s Brigade) as well as the film’s two male leads, Dean Martin and James Stewart, had already worked on more than one Texas-based Western film. Stewart had even been named an honorary Texan back in 1956. Bandolero was Raquel Welch’s first Texas picture and she was reportedly looking forward to  a role that would move her out of the sex symbol category. WBAP-TV reported Martin’s arrival at Love Field in October 1967 for four weeks of filming in Bracketville. Martin, who told newsmen that he preferred movies to television, was reportedly expecting some on-set danger and was  carrying a snake bite kit with him. 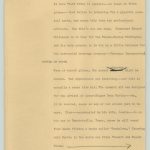 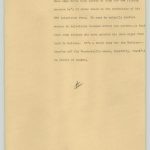 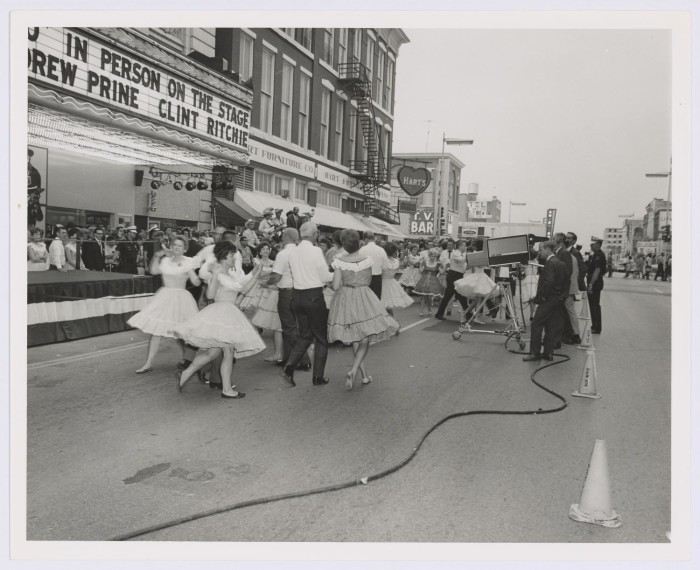 The Interstate Theatre chain regularly sponsored extravagant events and wild publicity stunts at their Majestic Theatre in downtown Dallas. The June 1968 world premiere of Bandolero! , orchestrated by Interstate and 20th Century-Fox, was no exception. The Dallas Morning News boasted that it would be “the biggest premiere ever held in the Southwest and probably one of the most extravagant in the nation.” 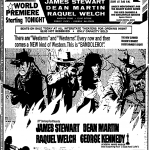 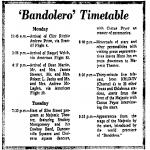 Courtesy of the Dallas Morning News 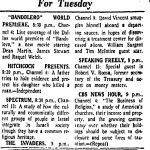 Courtesy of the Dallas Morning News

Celebrities began arriving in Dallas on Monday June 17th and were greeted by the press and Interstate Theater official, Raymond Willie.  Reporters from the Dallas Morning News reported the arrival of “a small section of the milky way,” including director McLaglen, producer Robert L. Jacks, James Stewart, Raquel Welch, Andrew Prine, and Clint Richie.The News observed that Welch “tied up the American Airlines ramps in her modified safari suit, mini-skirt, and her all-girl looks.” Ritchie, who had already been to 16 Texas cities to promote the film, arrived wearing an elaborate sombrero gifted to him by the city of McAllen. WBAP-TV described the airplanes arriving at Love Field as carrying “enough movie stars…to make it a constellation” but were disappointed that they had missed seeing Welch. The stars, minus no-show Dean Martin, were whisked away to the Hilton Inn, where they were treated to a poolside cocktail party followed by dinner at Harper’s Corner. 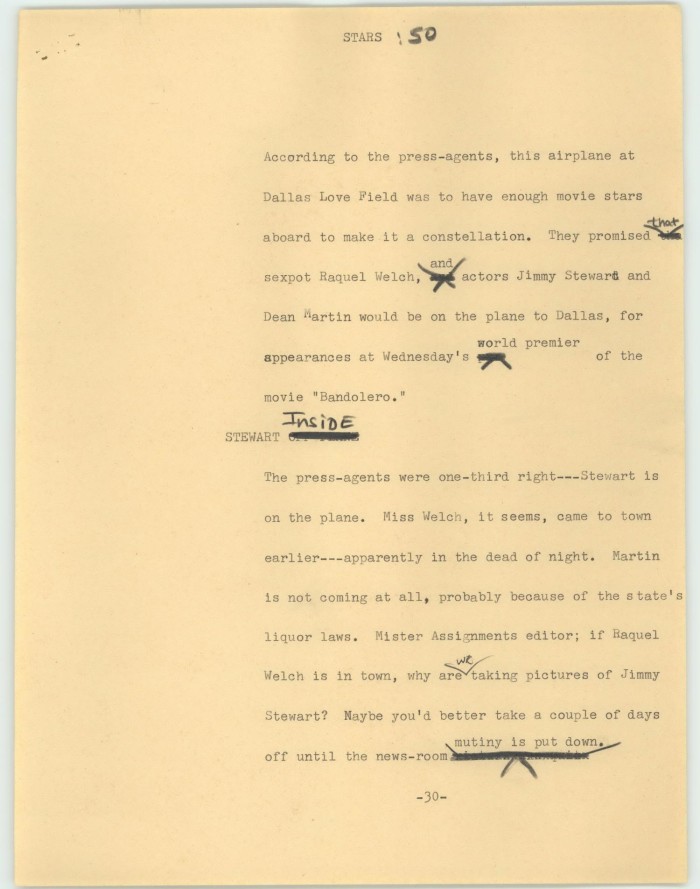 The day of the premiere, June 18th, began with a special preview screening and briefing for the premiere followed by a press conference with the stars. Elm Street was closed to traffic as the theatre began preparing for the pre-premiere entertainment. Thirty-five Texas and Oklahoma journalists as well as 23 television stations, including KRLD (Channel 4), were on hand to ensure “border-to-border” television coverage.  Two videotape units used to shoot Dallas Cowboys football games were even called to duty “making this, perhaps, the first premiere to have instant replays.” The Dallas Morning News reported that the live “informal” telecast would be directed by Olin Terry of Glenn Advertising and that it would be “loosely scripted, but impromptu.”The televised newscast would feature interviews with the stars, film footage, and “flashbacks to the music and dancing” taking place in front of the theatre. 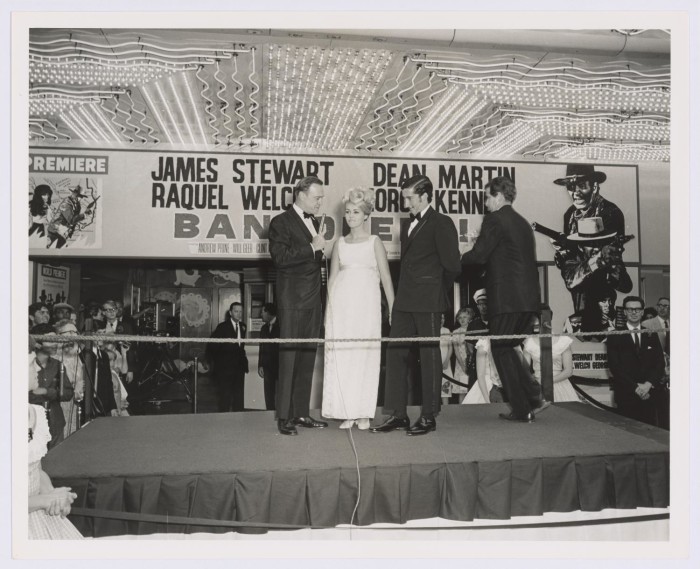 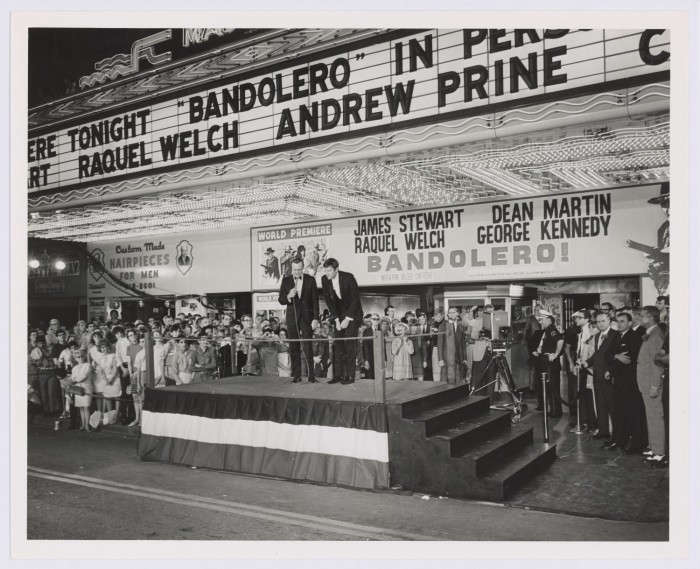 The evening entertainment began at 7:30 p.m. with Smokey Montgomery and his Cowboy Band providing the music and two square dance groups–The Duncanville Squares and the Dixie Chainers–providing the visual entertainment. The stars and their guests arrived by motorcade of seven limousines and a charter bus at 8 p.m.  The live telecast began at 8:30 p.m. with broadcast personality and emcee Cactus Pryor,  interviewing celebrities on stage in front of the theatre.  Can you identify the celebrities being interviewed in the picture on the left? At 9:15 p.m., the stars were to appear on the Majestic stage to introduce the film. After the busy day, stars were transported back to Hilton where they had a post-screening celebration.

Still and moving images of The Majestic and the events held there are not numerous and easily accessible. “Spotlight on North Texas,” a North Texas media preservation project has digitized and made publicly accessible more than 50 unique photographs of Dallas movie theatres. These photographs were generously donated by former Interstate Theatre employees and collectors, Lovita and Ken Irby. Check out their collection as well as other historic photographs and movies preserved by this project on The Portal to Texas History. If you recognize any events or locations, please email the project coordinator, Laura Treat.