3-Dimensional Action on the Screen: Bwana Devil at the Melba Theatre 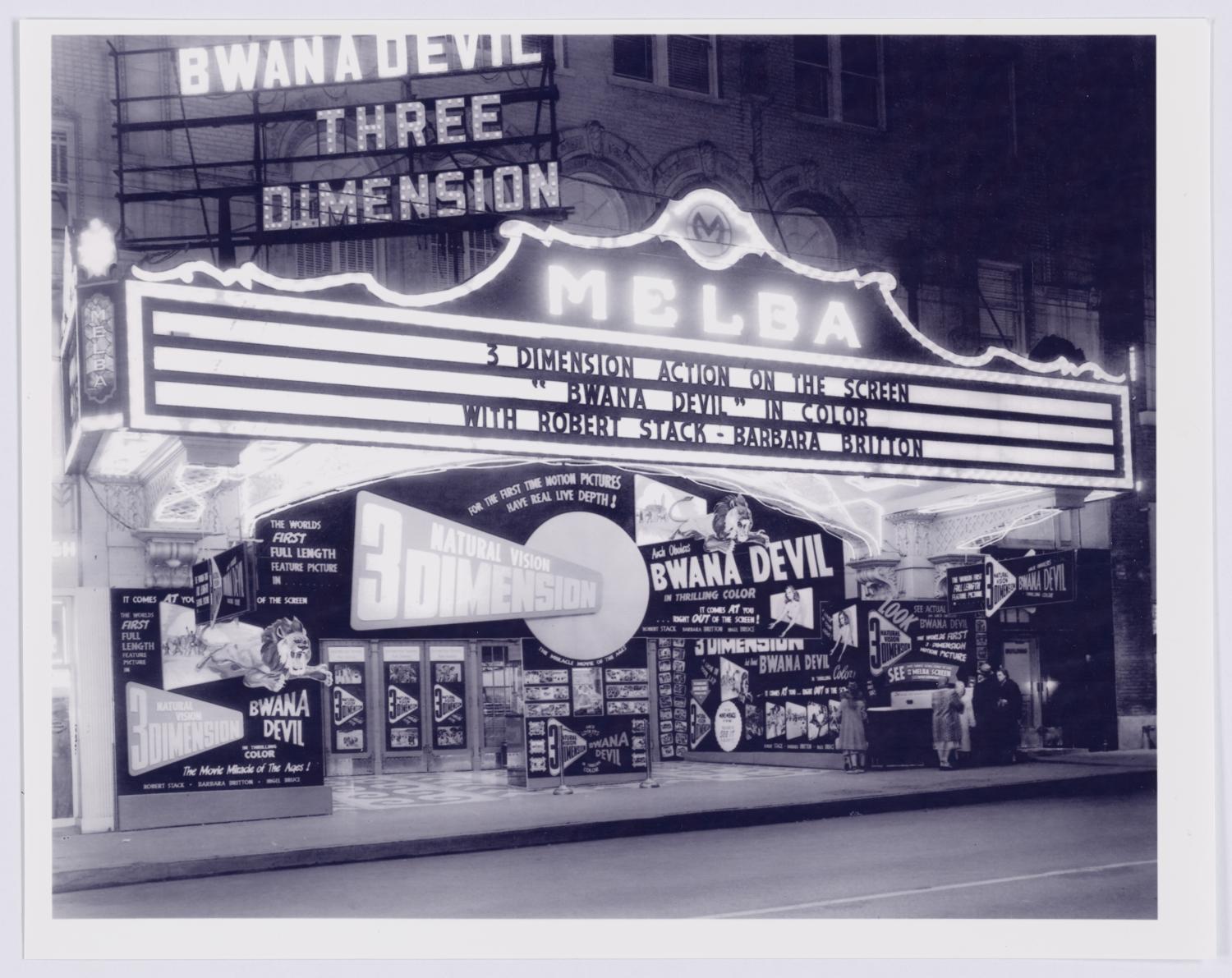 The Melba Theatre (previously The Hope Theatre from 1921-1922) was located at 1913 Elm Street on Dallas’ impressive Theatre Row and became part of the Interstate Theatre chain in 1939. In the 1950s, The Melba was an early adopter of cutting edge theatre presentation, including 3-D motion pictures. On Christmas Day 1952, The Melba was one of three Texas theatres showing the first feature-length color 3-D film, “Bwana Devil.”

In the early 1950s, television was on the rise and theatre attendance was declining. Motion picture studios were looking for new, innovative technologies and gimmicks to bring moviegoers back to the big screen. The enormous screens of Cinerama did bring people to the theatres, but it was costly and few theatres were able to instal the necessary equipment. A more practical solution was a new 3-dimensional presentation invented by the Gunzburg brothers’ Natural Vision Co. The brothers demonstrated the process to independent producer Arch Oboler, who eagerly adopted this technology to turn a rather mediocre story into a fantastic experience.

The resulting film, Bwana Devil, was the first feature-length 3-D color film and is considered a pioneer in the 3-D film market. Bwana starred Robert Stack and Barbara Britton and was based on the book,The Lions of Gulu, a story of big-game hunters tasked with defeating man-eating lions in Africa. The film opened simultaneously in two Los Angeles theatres on Thanksgiving weekend 1952 and was a box office success.

“If you didn’t get a lion in your Christmas stocking, then don’t give up hope for Interstate has one waiting to jump right in your lap.” 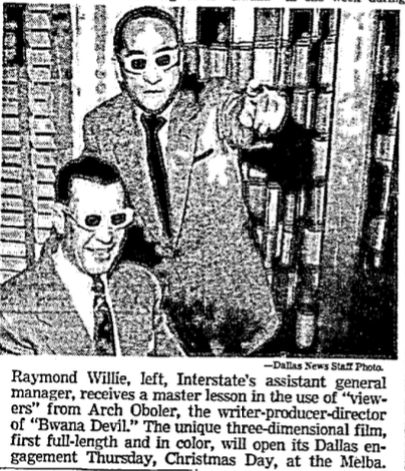 Interstate Theatre executive Raymond Willie, who attended the Hollywood premiere, arranged a Christmas Day opening for the film in Dallas at the Melba Theatre as well as Interstate Theatres in Houston and San Antonio. In the month that followed, new projectors and larger screens were installed and Polaroid glasses ordered for patrons. Oboler as well as the head of the Natural Vision Corporation came to Texas to ensure proper installation of the equipment.

The Melba Theatre opened their doors to patrons on Christmas Day at 10:45 a.m. ahead of such big markets as New York (“who is still arguing about Cinerama”). The theatre ran the film continuously, with no reserved seating, ending with a 10 p.m. late show. Dallas Morning News critic John Rosenfield was not alone in elevating the technology and dismissing the story. Of the “mediocre adventure story,” he stated “The picture has not been directed for even its slender charge of adventure. It has been used to make animals jump at you, to tickle your brow with spikes, and to choke you with wafting cigarette smoke.” However, of the “thousand persons or more” who saw the film at the Melba, he observed that they acted “as if they were seeing something that might revolutionize their best entertainment, the wonders of which they have long since taken for granted.” 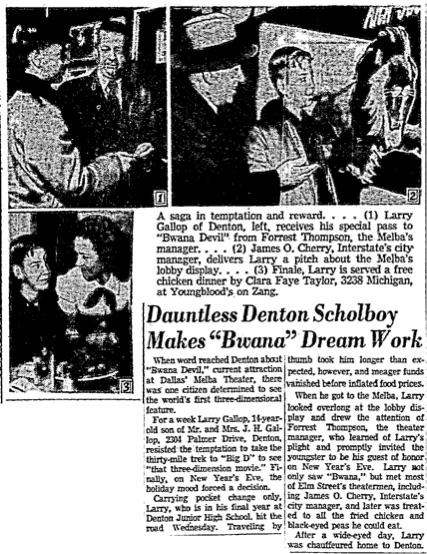 Despite its failures at storytelling, Bwana continued to attract Texas theatregoers — some of whom faced danger and punishment to see the three dimensional picture. Fourteen-year-old Larry Gallop of Denton reportedly hitchhiked from Denton to Dallas for a New Year’s eve screening but when he got there didn’t have enough money to attend. Thankfully, theater manager Forrest Thompson sympathized with the boy and invited Larry to be his guest of honor. Young Larry was even treated to a visit with Interstate executives, fried chicken and black-eyed peas, and a chauffeured ride back home to Denton.

Bwana Devil ended its successful three-week run in Dallas in late January 1953, but Dallas theatres continued to showcase other three-dimensional films and cutting edge theatre presentation technologies. Following the box-office success of Bwana other studios began developing their own system of shooting three-dimensional films. Just 5 months, Warner Brothers released House of Wax starring Vincent Price. Television news station WBAP-TV reported on the arrival of the stars of House of Wax in Dallas in April 1953 as well as the director of another 3-D picture, Sangaree in June 1953. 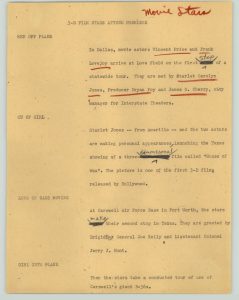 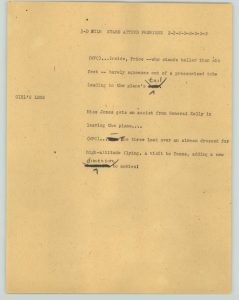 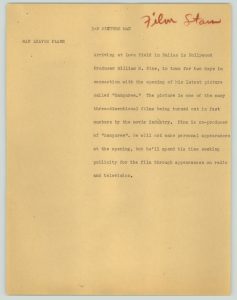 The Melba Theatre became The Capri Theatre in the 1960 and has since been demolished. Unfortunately, still and moving images of The Melba and other Dallas-area theatres are not numerous and easily accessible. “Spotlight on North Texas,” a North Texas media preservation project has digitized and made publicly accessible more than 50 unique photographs of Dallas movie theatres. These photographs were generously donated by former Interstate Theatre employees and collectors, Lovita and Ken Irby. Check out their collection as well as other historic photographs and movies preserved by this project on The Portal to Texas History. If you recognize any events or locations, please email the project coordinator, Laura Treat.