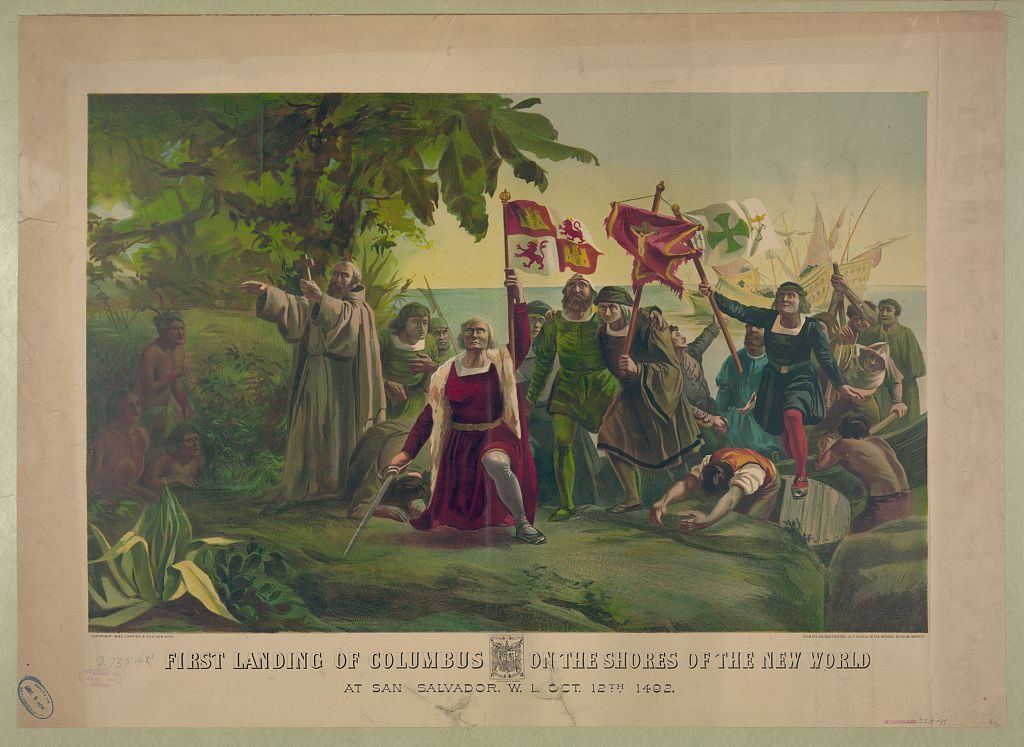 First Landing of Columbus on the Shores of the New World, published in 1892, the 400th anniversary of Columbus’ 1492 landing at San Salvador. Source: Library of Congress

Most Americans recognize the October 12 federal holiday as Columbus Day. This day marks the anniversary of Christopher Columbus’s landfall in 1492 on what is now known as the island of San Salvador in the Bahamas. The 400th anniversary of this landing became a one-time national holiday in 1892, when President Benjamin Harrison proclaimed it in an effort to calm diplomatic tensions with Italy, following a mass lynching of Italian-Americans in New Orleans. The campaign to establish Columbus Day as an annual holiday continued into the 20th century, and in 1968 it finally became an official U.S. federal holiday.

While Columbus Day had developed as a reaction to ethnic discrimination, the story of Christopher Columbus himself was problematic. He had not been just an explorer; he had been a brutal colonizer. Modern historians have brought to light accounts of enslavement, torture, sexual violence, and murder of native people, all conducted under Columbus’s rule as the governor of the Caribbean island of Hispaniola. Additional mass deaths had resulted from unlivable conditions on slave ships, famine, and communicable diseases such as smallpox. By 1506 — just 14 years after his arrival — the native population of the island had been reduced to one-third of its original numbers. Columbus is considered by many to have set in motion a centuries-long pattern of genocide of indigenous populations in the Western Hemisphere.

In the late 20th century, there began a movement to replace Columbus Day with a holiday celebrating the resiliency and survival of Native American people. South Dakota was the first U.S. state to establish such a holiday, called Native American Day, in 1989. In 1992, on the 500th anniversary of Columbus’s landing, the city of Berkeley, California established the first Indigenous Peoples’ Day. Since then, numerous American cities and some states have adopted the holiday. Some locations observe both Columbus Day and Indigenous Peoples’ Day.

One way to celebrate Indigenous Peoples’ Day is to take time to learn about the lives and cultures of indigenous people in North America throughout the last few centuries. The UNT Libraries’ Government Documents Collection is a treasure trove of historical resources for that purpose. We’ve included here a list of recommendations from our staff.

Issued by the U.S. Department of Education in the 1970s and 1980’s, this is a collection of culturally relevant stories written by Native American authors and illustrated by Native American artists. The booklets are designed for school-aged children, as educational resources for reading and language development. The stories were authenticated by participating Native American tribes and field-tested with over 1200 schoolchildren, both Native and non-Native.

The Problem of Indian Administration (a.k.a. The Meriam Report)

Published in 1928, this report provides an overview of the governmental and religious bureaucracies that impacted the lives of Native Americans in the U.S. after the Indian Wars. Data for the report was collected by field work in 95 different jurisdictions, including reservations, Indian agencies, hospitals, schools, and communities where Native Americans had migrated.

Topics include health, living conditions, causes of poverty, compulsory boarding schools, missionary activities, and the work of the government. The authors of the report provide detailed recommendations for managing economic and social conditions within those jurisdictions.

This is a 20 volume encyclopedia; to date, 15 volumes have been issued by the Smithsonian Institution. When completed, the Handbook will give an encyclopedic summary of what is known about the prehistory, history, and cultures of the aboriginal peoples of North America who lived north of the urban civilizations of central Mexico. Each volume in this set is independent of the other volumes and contains separate chapters on all the tribes within a geographic area.

Most of the contributing authors of this series are scholars, anthropologists, and historians; but the articles are written for the general public, as well as for teachers, students, and researchers.

This set is best known for its striking historical portraits (painted and photographed) of indigenous people, many in traditional dress.

The volumes are not available online, but print copies are available upon request at the Libraries. For access, please contact us at govinfo@unt.edu. Our catalog record provides some information about the individual volumes.

[Update: Volume 1 (a new volume) was published in 2022 and is available online. You can access the online version through the link to the catalog record above.]

Bulletins and Annual Reports of the Bureau of American Ethnology

The Bulletin of the Bureau of Ethnology (later called the Bureau of American Ethnology) is a series that began in 1887 and continued through 1971. Each bulletin documents specific aspects of indigenous American history, culture, and language. Notable topics include (but are not restricted to) archeology, art, mythology, music and dance, linguistics, and contemporary culture in the early-to-mid 20th century.

The Annual Reports of the Bureau cover similar topics but also include administrative or political topics such as frontier wars, reservations, land cessions, and boundaries. Later reports focus more heavily on archeological research.

Article written by Betty Monterroso, with contributions from Bobby Griffith.