Alvin Clark Owsley (1856-1938) was born in Missouri, received most of his schooling in California, moved back to Missouri to study law, and moved to Denton, Texas in 1873 to be a public school teacher. A year later he was the examiner of teachers for Denton County, remaining in that position until 1884. Owsley continued with his career in law. He received his Texas law license in 1875. By 1882 he was licensed to practice in the circuit and district courts for the Northern District of Texas. He received a doctor of laws degree from Nashville College in 1903.

C. Owsley was a prominent member of the Denton community. He was elected to serve three terms in the Texas legislature, starting in 1888.   He also served a term as a district judge in the sixteenth judicial district of Texas (1926-1928). In 1934 he was appointed special chief justice of the Texas Supreme Court. Owsley was also the first president of the Denton Chamber of Commerce.

In the 1880s Alvin Owsley owned the structure on the corner of Oak and Elm. At that time it housed a saloon downstairs and Mr. Owsley’s law offices upstairs. It burned down in 1884 and a two story brick building replaced it. The new building was occupied by B. J. Wilson Hardware and would be used as the site for the first classes of the Texas Normal College and Teachers Training Institute.

Mr. Owsley combined his interested in education with his service to the citizens of Denton when he was one of the individuals appointed to a committee to study Joshua C. Chilton’s proposal for a normal school. The other members of the committee were J. W. Jagoe, J. T. Bottorf, H. C. Ferguson, and T. M. Davidson. They submitted a proposal to the Denton City Council for the new institution, which was approved. Owsley would also be named to be an early regent for the new normal school, serving as the secretary of that body. Owsley was named as one of three Denton citizens to act as local directors to assist the state board after the 1899 act passed that placed UNT under the administration of the State Board of Education. The other members were Judge F. E. Piner and E. C. Smith.

The papers of Owsley’s son, Alvin Mansfield Owsley are housed in UNT Special Collections. The collection contains several reference to his childhood growing up Denton, as well as documentation of his later career as a lawyer, diplomat and member of the American Legion. 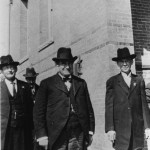 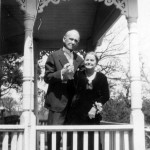 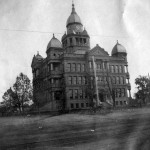 An early image of the Denton County Courthouse that was in the photography collection of the Owsley family. Alvin C. Owsley was a prominent lawyer in Denton and would have spent countless hours in this building. 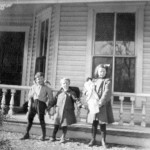 An image of Alvin C. Owsley’s children, Alvin Mansfield, Louise and Stella. The image was taken in front of the family’s home. 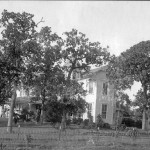 An image of the Owsley family home, built in 1893, was located on Oak Street in Denton, Texas. At the time the family lived here the street was popularly known as Sand Street. The land the family owned would eventually be sold off. The area is now the site of numerous apartments and is known as the Owsley Addition. Louise and Stella Streets were named after the daughters of Alvin C. Owsley.