It was not the first time that politicians in Austin were considering the merger of North Texas State University (now UNT) and TWU. On several occasions before, the existence of two comprehensive state universities in one small north Texas city had become a subject of heated debate at the State Capitol. In times of economic downturns, the proponents of the measure would voice their strong reservations to funding the two institutions which were perceived as strikingly similar in their role and mission.  However, it was not until 1986 that NT and TWU came very close to becoming one university.

This time, in a climate of austere state economic conditions, the proposed merger of the two institutions was but a part of a much larger project to overhaul the entire system of higher education in Texas, which the legislators considered haphazard, costly, inefficient, and lacking in adequate academic standards. In 1985, Texas Legislature created Select Committee on Higher Education and charged it with the task of reforming the system.  Several organizational proposals were submitted to the Committee, some based on geography, and some on mission; some of them included mergers. Among the seriously considered proposals was one by Larry Temple, the Committee Chairman, who put forward a plan to create a five-tier system of colleges and universities, each group with a distinct academic mission and with only one governing board; importantly, several small colleges and universities were to be merged with bigger ones, and TWU and NTSU were among them.

The news of the proposed reorganization galvanized Texas academic communities. Many colleges and universities launched vigorous campaigns to garner support for their cause, members of their higher administrations travelling to Austin armed with arguments to secure the standing of their institutions, some offering alternative plans for consideration by the Select Committee. NT Board of Regents and President Al Hurley submitted an alternative restructuring model for North Texas universities that would effectively strengthen the position of NT, while Dr. Shirley Chater, the newly elected President of TWU, prepared the ground for the fight to preserve the very independence and autonomy of her university. In her first appearance before the Select Committee at the State Capitol in Austin, President Chater offered a powerful testimony to the continued validity of TWU’s position as the only public university primarily for women. In a spectacular show of support for their University and their President, over 600 TWU students, together with faculty, staff members, and alumnae, attended the meeting.

While among NT students the reaction to the unfolding events was mixed, with some maintaining a “wait-and-see attitude, TWU students organized rallies, vehemently protesting against the proposed merger. When interviewed by the media, several TWU female students emphatically stressed the unique atmosphere of their alma mater, pointing to its “more encouraging faculty,  smaller classes , more positive female role models, and more leadership opportunities” (NT Daily, July 3, 1986).

Ultimately, the proposal of the merger of TWU and NTSU (and a few other mergers under consideration) was dropped even before The Select Committee released its final report. Having considered numerous plans of reorganizing the Texas system of public colleges and universities, the Committee submitted, along with other measures, a modified mission-based restructuring model.  However, when the report reached the Legislature, the latter adopted only some of the Committee’s recommendations (those pertaining to academic standards and to new approaches to supporting university research) rejecting the model of the five-tier system.

Thus, the merger of TWU and NTSU, which would have had important implications for NTSU, but which would have struck at the very existence of TWU, was averted. New laws brought about a number of changes in both institutions, but especially at TWU, which, under the leadership of President Charter, underwent significant reorganization.

If you would like to learn more about his chapter in the history of the two Denton based universities: 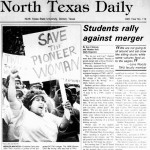 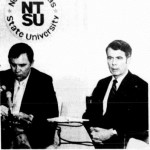 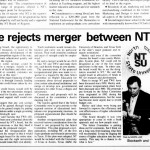