Prolific writer and North Texas alum Larry McMurty was born on this day in 1936 in Archer City, Texas.

McMurtry contributed works of poetry, fiction, and non-fiction to the campus literary magazine, Avesta, during his tenure at North Texas. In May 1957, during his junior year, he won $25 in an Avesta “best-of” contest for his non-fiction essay about jazz musician Bix Beiderbecke. Reflecting on his years at North Texas in 1978, McMurty told The North Texan “I was quite happy here […] I found it a very stimulating school.”

McMurtry graduated from North Texas with a bachelor’s degree in English in 1958. After leaving North Texas, he continued his education at Rice University, earning a Master’s in English from Rice in 1960. McMurtry studied at Stanford University as a Wallace Stegner Fellow in 1960.

McMurtry has received numerous accolades for his writing, most notably the 1986 Pulitzer Prize (Fiction) for his novel Lonesome Dove and the 2006 Academy Award for his adapted screenplay (with Diana Ossana) for Brokeback Mountain. McMurtry is also a three time recipient of the Jesse H. Jones Award from the Texas Institute of Letters: in 1962, for his debut novel Horseman, Pass By, in 1967, for The Last Picture Show, and in 1986, for Lonesome Dove. Eleven of McMurtry’s novels have been adapted into motion pictures or mini-series.

In addition to his writing career, McMurtry is the longtime owner of the bookstore Booked Up in his hometown of Archer City. The store was founded in 1970 in Washington, D.C. but moved to its current location in the Texas Panhandle in 1988. Booked Up is a renowned used bookstore carrying “between 150,000 and 200,000 fine and scholarly books” (Booked Up website). McMurtry purchases and shelves all the stock himself.

North Texas named McMurtry a Distinguished Alumni at the 1986 Alumni Awards Dinner in recognition of his many achievements as a writer. UNT again recognized McMurtry’s achievements at the 2014 Emerald Eagle Honors, a “Kennedy Center Honors-type stage production” that honors three North Texas alumni “who have profoundly impacted our culture and society” (Emerald Eagle Honors 2014 homepage). 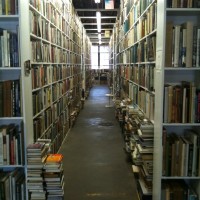 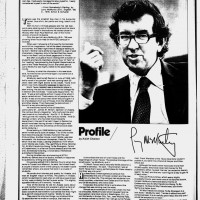 A profile on McMurtry in The North Texan magazine, 1978. 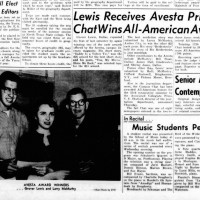 Larry McMurtry accepts his award from the North Texas literary magazine, Avesta, in May 1957 for his non-fiction essay about Bix Beiderbecke.