In 1990 the University of North Texas was celebrating its 100th anniversary. In addition to exhibits, parades, and parties it was decided that the Industrial Technology Department (now the College of Engineering) would participate in the design and construction of a solar car. The car, named Centennial, took part is an eleven day race of solar cars sponsored by General Motors. The UNT team had the fewest team members, the least expensive car ($70,000), and went up against 32 other teams. For comparison, the University of Michigan team had an $800,000 car. Faculty advisor John Dobson and team leader Lee Palmer supervised the two years of design and building that it took to create UNT’s solar car. Other team members were Greg Mitchel and Jeff Curtis.

The car was a three wheel, 16 foot long, one-seater.  The vehicle was only 34 ½ inches tall which tapered to just a few inches in the rear and had only a three inch ground clearance.  It weighed 377 pounds, making it the lightest car in the race.  It held a one horse-power engine and reached speeds of 23 miles per hour.

The team first had to qualify for the race, which they did in 11 hours and 38 minutes at the Daytona Speedway in Daytona Beach, Florida.  They would be ranked twelfth at the start of the race.

Life for the team members was not easy. Their day started at 5:00 A.M.  They charged the car with sunlight for a couple of hours, raced for nine hours, and then charged the batteries again.  Members of the team took 4 ½ hour shifts driving the car. There was only a small space for the driver and no air-conditioning, so the driver was often working in temperatures that reached 105 degrees. The car’s most common problem during the race were flat tires – an unwanted event that happened seven times.  The team was unable to race for two days due to frequent rain, which had an impact on the placement of the team. The Centennial finished the race in 18th place.

– Perri Hamilton, Assistant to the Archivist 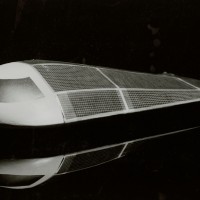 A model of the solar car UNT would enter in the General Motors’ Sunrayce. The car was built from bicycle parts and had only three wheels. It was built for endurance rather than speed, generating only one horsepower. It averaged 23 miles an hour. 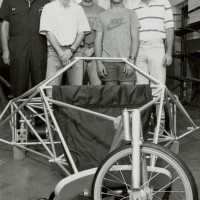 The design team is photographed with the skeleton on the car during the building process. 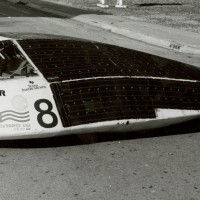 The UNT solar car was named Centennial in honor of the university’s 100 year anniversary. This profile image of the car shows how low to the ground it was. 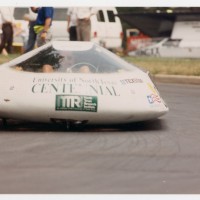 Spectators came out all along the route, from Michigan to Florida, to see the race. 32 cars entered the car race. UNT would finish 18th. The knees of the driver are visible through the windshield of the Centennial. The driver worked in a small cramped space without air-conditioning during the GM Sunrayce. The drivers were Lee Palmer, Greg Mitchell and Jeff Curtis. 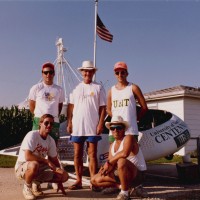 The team poses with UNT’s solar car during a repair stop along the side of the road. The race was held July 9 – 19, 1990. Dr. John Dobson, center, was the team’s supervisor. 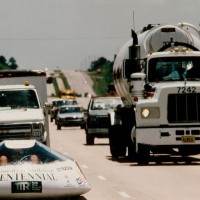 The cars raced on highways along with the regular traffic that those roads carried. General Motors provided two cars to each team to move the team and provide technical support during the race.