Once upon a time women wore dresses and men wore pants. Before the late 1960s women could wear pants to work in their garden, around the house, or at the beach, but pants were still considered unprofessional for work in an office or school.  Previous standards had been relaxed because of the obvious functionality of men’s clothing for vigorous activity, but women’s clothing was primarily ornamental. That all began to change during the upheaval of the 1960s when women wearing slacks in public became more acceptable. Fashionable women of the early 1970s wore miniskirts that were hard to bend over or move in, and longer skirts could look dowdy or old fashioned. Women found the idea of wearing pantsuits much more practical and comfortable. There was just one problem: they were not considered professional attire for women employees at North Texas State University until 1971.

In December of 1970, The North Texas Daily took note of the trend in an article that would be considered politically incorrect today titled “Pant-Suit Craze Overtakes Campus: Girl Watchers See Less Leg Nowadays.” Men were told that they were going to have to get used to seeing a little less leg because girls were wearing pants everywhere, even to “theaters, parties, school, work, in fact just about everywhere, except for church.” While students had been wearing pants to class for a few years, not long before this time girls could be sent home from school for wearing pants. In 1970 they were seen as not just stylish, but practical, as well. Not only were they easier to wear, but they cut down on buying hosiery. “This is a relief for females because no girl likes to spend her entire paycheck on hosiery.”

On January 13th, 1971, the NTSU President’s cabinet approved the wearing of “appropriate pantsuits” for women employees in a memo with the subject, “Propriety of Pants in the Office.”  What is an appropriate pant-suit, you ask?  This did not include jeans at any time, or pants with a sweater or blouse. What it included was “loose fitting trousers” with a jacket, vest, or tunic top that covered the hips and were at least as long as the wrists. They were usually dressy or tailored. Many pant-suits came in far out colors and groovy patterns, but women employees were expected to be “neat and businesslike.” 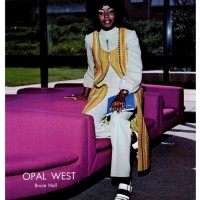 Student Opal West modelling a groovy pant-suit in Bruce Hall for the 1972 Yucca. 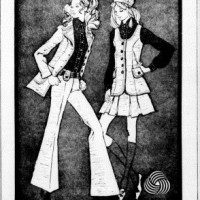 Advertisement for women’s pant-suits from the North Texas Daily on October 13, 1970. 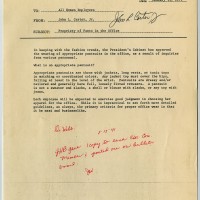 UNTA_UG017-0160-001 Memo from John L. Carter addressed to all women employees giving them permission to wear appropriate pant-suits to work. Before this time, women employees were required to wear skirts or dresses to work. Memo from the David Webb collection. 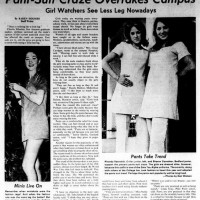 In 1970 the North Texas Daily announced that there was a pantsuit craze going on the campus. Pant-suits added a comfortable alternative to the miniskirt, which was difficult to move and bend over while wearing. 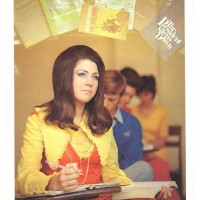 Many of the pantsuits were in bright colors and had unusual fashion details, like this orange number with a yellow collar that reached half way to the waist worn by a student in the 1971 Yucca. 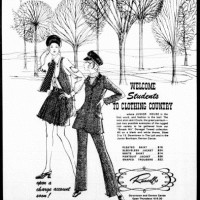 Advertisement for women’s pant-suits from the North Texas Daily on September 3, 1970. 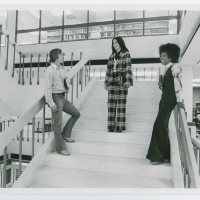 UNTA_U0458-002-005 Three students, including two women wearing pant-suits on the stairs of the newly opened Willis Library in the early 1970s. One woman sports a plaid jacket and matching trousers, while the other is wearing some bell bottom pants and a long vest, with a vividly patterned blouse worn underneath the vest.

4 Responses to “Can you dig it? Women employees can wear pant-suits to work!”