You may hear her work every day and not even know it: Julia Smith composed the University of North Texas’ alma mater, “Glory to the Green,” which rings out from the clock tower every day at noon.

Born in the town of Caldwell in Burleson County, Texas on January 25, 1905, young Julia Smith took piano lessons with Mary Anderson, a graduate of the Royal Conservatory of Music in Leipzig, Germany, and an instructor at what was then North Texas State Normal College. In her teens, Smith studied with Harold von Mickwitz at St. Mary’s Institute of Musical Art in Dallas. Her father, James Willis Smith, was a professor of mathematics at North Texas, and an amateur musician. Smith herself graduated from North Texas with a Bachelor of Arts degree in English, but was clearly active as a musician during her undergraduate years.

She earned a master’s degree from New York University in 1933, and continued her studies in piano, composition, and orchestration at the Juilliard School of Music, studying under Carl Friedberg and Virgil Thomson, among others. She credited Friedberg with advising her that “the woods are full of good pianists,” but “there are few really good American composers.”

She served as pianist for the all-women’s ensemble Orchestrette Classique of New York, and took on ambitious composition projects, including her first opera, Cynthia Parker. She intended for that work to coincide with the Texas centennial celebrations of 1936, but the work was finished in 1939. That opera, and another, The Stranger of Manzano, were premiered at North Texas.

Smith composed a number of works on Texan themes, including Cynthia Parker, and Remember the Alamo!, which was inspired by William B. Travis’ famed “Victory or Death!” letter of 1836, and composed for the inauguration of President Lyndon B. Johnson in 1965. Her compositions are said to “incorporate folk melodies and dance idioms within a relatively conservative, tonal harmonic palette, although she was not afraid of dissonance.”

She also became known as an early biographer of composer Aaron Copland through the 1955 publication of her doctoral dissertation (Ph.D., NYU, 1952), Aaron Copland: His Work and Contribution to American Music. The Julia Smith Collection at the UNT Music Library also contains a number of scores of Copland’s compositions which she had copied by hand.

Julia Smith died in 1989 after a career as a composer, writer, and advocate for women in music which covered most of the 20th century, and is buried in the International Order of Odd Fellows (IOOF) Cemetery in Denton. 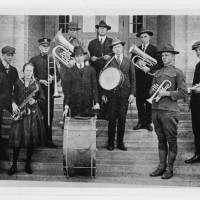 UNTA_U0458-005-010_01_01 A photo with Julia Smith on tenor saxophone, from the wall of the main hallway of the Administration Building. 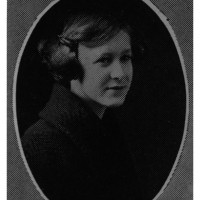 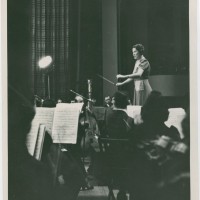 Julia Smith as a guest conductor with the Dallas Symphony Orchestra, in 1940.