A central place to rest, meet friends, and have fun was the wish of students for many years. This wish was delayed due to the Great Depression and the Second World War. Following the war the UNT campus entered a building boom to better serve the increased enrollment due to the returning soldiers. A union building was one of the structures added to the campus. The structure filled the need for a gathering place. The Union also served a more somber function as a memorial to the students who gave their lives in the First and Second World Wars. It was named the Student Memorial Union Building.

The structure was first used as an army service center at Camp Bowie, before being moved to campus and rebuilt into a student union building. The building was financed with the proceeds of the Building Revenue Bonds Series in 1948 and local funds. The structure faced West Chestnut and was two stories with a brick veneer. The building had a large veranda in the center of the south (back) side. The interior had a mezzanine floor. The building boasted a snack bar, cafeteria, dance-lounge area, club rooms, an auditorium, game rooms, a U. S. Post Office, and offices for the director and staff.

The Union was dedicated on March 31, 1949, the 50th anniversary of the signing of the legislation that made UNT a state institution in 1899. UNT Alumnus Lieutenant General Roger M. Ramey, U. S. Air Force, spoke to the gathering of administrators, faculty, and students at the ceremony. A bronze plaque was erected in the main foyer. It listed the names of the former students who died in military service.

The main gathering space, The Howdy Room, was in the center of the Union. It was decorated in a western theme with wagon wheels, ropes, and barrel shaped lamp bodies. Students would gather to play the piano, listen to the One O’clock Lab Band, dance, and watch TV.

A cement slab was adjacent to the Union. It served as the location for classes, a place to hold dances, and an informal gathering spot for students. Alumni still recall Wednesday night dances, the Howdy Dance, and other events held outside on the Slab. 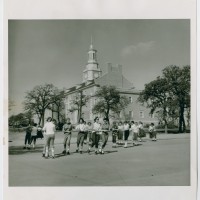 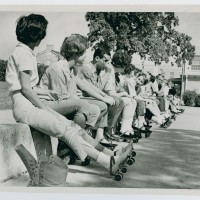 UNTA_U0458-031-002_01 Students sit on the ledge that ran along the Union slab as Rita Pilkey takes roll before a roller skating class. 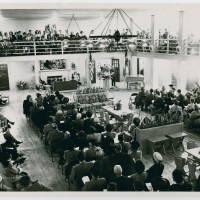 UNTA_U0458-035-004_01 The Union building was dedicated on March 31, 1949. Major General Roger Ramey, a North Texas alumnus, was the guest speaker at the event. He recalled his days as a student twenty-five years earlier and how the students at that time longed for a union. He stated that he did not think then that the students would need to wait through another world war before they would see the dream fulfilled. 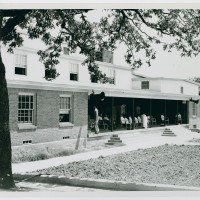 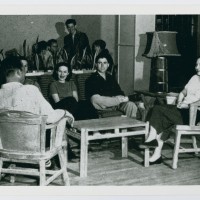 UNTA_U0475-009-002_01 Students relax in the Union’s Howdy Room. The wooden furniture and barrel shaped lamp base added to the western themed décor. 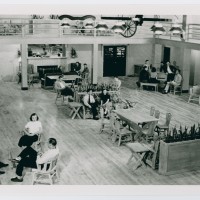 UNTA_U0475-009-001_01 A view of the Howdy Room. It had western themed decorations (wagon wheels, barrel shaped lamp bodies, and ox harness holding overhead lights) and a large neon sign that spelled out “Howdy.” 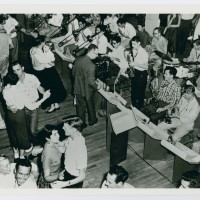