Dr. McConnell started as a faculty member at the North Texas State Normal College in 1916. McConnell rose to become a dean in 1923 before becoming the school’s president in 1934. He would serve until 1951. President McConnell died on November 24, 1955. His administration was noted for the expansion of the campus with the construction of 22 new buildings. Some of the structures that were built during McConnell’s time in office were: Marquis Hall, the Library (now known as Sycamore Hall), Chilton Hall, Terrill Hall, Bruce Hall, the Journalism Building (also known as Scoular Hall), and the Chemistry Building (also known as Masters Hall). McConnell was the President Emeritus from 1951 until his death.

In January, 1956, while the Administration Building was under construction, an announcement was released that the administration and the Board of Regents would name the building’s tower the President W. Joseph McConnell Memorial Tower. Matthews went on to say that “it is fitting that one who has had so much to do with developing the physical plant of the college should be memorialized in this symbol of the college’s growing stature. The administration and Board of Regents felt it uniquely fitting that the tower should be named the W. Joseph McConnell Memorial Tower.”

A tower in the center of campus, with chimes, had been a long time dream of the North Texas community. The first proposal, in 1928, called for chimes to replace the curfew bell and the installation of an electric clock in a tower. Other proposals failed to find funding. Money raised for the tower and carillon were used instead for the building and decoration of the first union building. Plans for a new administration building would finally bring the dream to reality. Friends of President McConnell, students, and alumni were encouraged to donate toward the purchase of a carillon for the tower. The first contribution was made by the chairman of the Board of Regents, Ben Wooten. Mr. Wooten, president of the First National Bank of Dallas, had studied under Dr. McConnell as a student at the college.

The clock face was installed in October of 1956. Originally only one face, measuring 6 feet 2 ¾ inches in diameter, was installed on the north side facing the campus. The minute hand measured 36 inches with the hour hand at 24 inches long. The hands and letters are cast in bronze. Four floodlights were installed to illuminate the tower at night.

The carillon is a 32 note Deagan Celesta Chime. The source of the tone is a series of slender metal rods which sound by electronically activated strikers. Microphones enhance the sound and carry it across campus via loudspeakers. The carillon can be played manually or with record rolls. Plans originally called for the carillon to be played each evening and for special events. Westminster chimes provide notice of the time every hour on the hour.

The dedication of the tower, which rises 189 feet above ground level, and carillon was held on December 16, 1956. President J. C. Matthews presided at the ceremony. Ben Wooten dedicated the tower. Dr. A. M. Sampley, vice president of the college, delivered the invocation. June Albright, of the J. C. Deagan Company, performed as part of the dedication ceremony. Recognized as one of the top carillonneurs in the nation, she performed “Adeste Fideles,” “What Child is This?”, and “In Dulci Jubilo” among other songs. The performance ended with the college alma mater.

During his speech Wooten stated, “He [McConnell] was a great administrator, and the Board of Regents thought it was fitting that this tower, standing as it does at the center of the campus overlooking the 22 major buildings which were built during his administration representing the culmination of a dream of student, ex-students, faculty, and Board of Regents, should bear his name.” 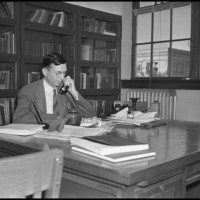 UNTA_U0458-097-592-01 James Carl Matthews became President after President McConnell retired. He saw the building of the new Administration Building through and presided over the dedication of McConnell Tower. 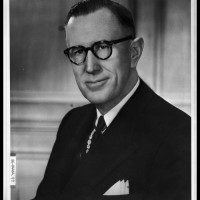 Ben Wooten delivered the speech at the dedication ceremony for the McConnell Tower. He was the head of the Board of Regents at that time. Photo courtesy Hardin-Simmons University Library. 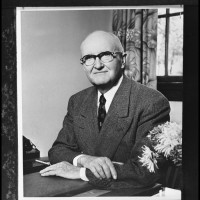 UNTA_U0458-097-562-04 Weston Joseph McConnell served as President from 1934 to 1951 seeing the campus through the Second World War and the growth that came with peace. Twenty-two buildings were built while he was in office. 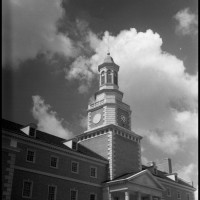 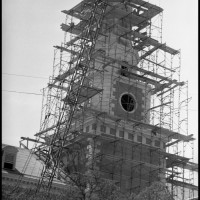 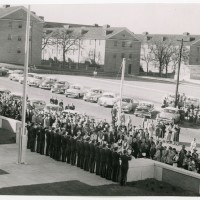 UNTA_U0458-023-024_01 A row of trumpeters open the ceremony for the dedication of McConnell Tower. Bruce Hall is seen in the background. 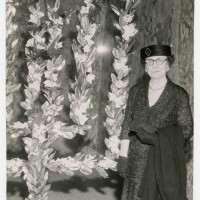 UNTA_U0458-023-023_01 Mrs. McConnell stands by one of the flower arrangements that decorated either side of the central staircase in the Administration Building for the dedication ceremony of McConnell Tower.

One Response to “The McConnell Tower”