Over the 125 year history of North Texas many buildings have served the needs of the faculty and students. A few, such as Curry Hall and the Power Plant, have stood on campus since the 1900s. Others are remembered by alumni and faculty, but they ceased to grace the campus as new and larger structures took their place. Below is a list of buildings that exist only in photographs and the memories of those that passed through them.

Texas Normal College and Teachers Training Institute, now the University of North Texas, held its first classes in 1890 above a hardware store just off the Denton square. A year later the students and faculty moved to the institution’s first building, the Normal Building. This structure housed offices, classrooms, and a library – all that the new and struggling school needed. It sat on the corner of Avenue B and Hickory, the current site of Hickory Hall. Its tower housed the curfew bell, which tolled the start of the day and the time all students had to be in their boarding houses at night. This structure was struck by lightning and burned to the ground in 1907.

The Main Building was the second brick, or permanent, building on campus. This structure stood on campus from 1904 until it was torn down in 1923 to make way for the new Administration Building (now known as the Auditorium Building). It housed an auditorium, a library, administrative offices and classrooms.

In 1909 the site of the Normal Building was used for the new President’s House. The building was erected during President Bruce’s administration. It was a two story frame structure with five rooms and a screened in sleeping porch. The entrance was adorned with two fluted columns standing two stories tall and topped by composite plaster capitals. This house was used until a new President’s House was constructed in 1956 (near the current site of the Gateway Building).

In 1910 the school invested in the sciences by building the Science Building. It was located on the corner of Avenue A and Hickory, which is now the site of the Language Building. It had a dining room which President Bruce used to host Board of Regents visits. The structure was the site of classes in physics, math, chemistry, manual training (industrial arts), agriculture, and domestic science (home economics). During World War II a sweet potato dehydrating plant was in housed in the basement and Dr. Miles Anderson conducted research on radar beams on the roof. Physical Education was the last department to occupy the building. The structure was torn down in 1967.

The Manual Arts Building was opened in 1914-1915 school year. It originally housed the Industrial Arts Building. It would go on to house Business, Home Economics, and the Art Department. The building had a similar look to Curry Hall. It was located in roughly the same are now occupied by the General Academic Building.

The south side of campus was occupied by the school’s first football field which was opened in 1913. It stood off Highland Street, an area now occupied by the Library Mall.  It served as the college football field until 1952, when Fouts Field was built. It then served as the football field for the Laboratory School until 1968-1969, when the construction of Willis Library was started. At the north end of the football field were two gyms. Harriss Gymnasium was opened in 1923. Due to a policy of not naming buildings after still living individuals, the gym’s name was informal. The structure was named for Beulah Harriss, the first woman hired as a member of the Physical Education Department. The building sat on the north end of the original football field – just east of the Hurley Administration Building on today’s campus. The structure was torn down as the construction of the Hurley Administration Building was nearing the completion in 1956. The second gym was known as the Men’s Gym. This building opened in 1913. It was opened as the Model Training School (also known as the Demonstration School and later the Laboratory School). The structure also served as a barracks for men in the Student Army Training Corps. At the end of World War I it began its life as a gym. This structure was torn down in 1953.

The Education Building was completed in 1918. It was located between Chestnut Street and Sycamore Street. Today this site is an open field bordered by Sage Hall to the east, the Union to the south, and Sycamore Hall on the west. The building housed several departments over the years and was known by several names: the Language-Government Building, the Business Administration Building, and finally the Psychology Building. It was torn down in 1979.

One of the most popular structures on campus was the swimming pool. It opened in 1926 and was originally filled with artesian spring water. On April 8, 1940, The Campus Chat stated that, “A fresh-water circulation keeps artesian water flowing into the pool all day long and carries scum off into the side troughs. The pool is drained on Saturdays and allowed to sun on Sundays.” It was located east of the football field (located on today’s library mall area). The summer gathering spot closed in 1986 to make way for the Eagle Student Services Building.

The first Post Office was located in the basement of the Library (now Curry Hall). In 1939, the Post Office was moved to its own building. It was 52 by 32 feet with arched windows. This structure was located southeast of the Power Plant on Ave A. There were approximately 1,000 mail boxes, with boxes assigned to two to four students per box. By 1949 the Post Office was moved into the first Union Building. The Psychology Department and Industrial Arts were located in the structure before it was torn down to make way for the Physics-Mathematics Building in 1959.

The Journalism Building was built in 1949. This two story structure was built on West Prairie Street, behind the Union Building and east of the swimming pool. It housed the Journalism Department and the Print Shop. After renovations in 1991 it was renamed Scoular Hall. Florence Scoular was the longest serving director of the Home Economics Department (1938-1968). The building housed the Center for Marketing and Design, the Texas Fashion Collection, and the College of Visual Art’s fabric design laboratory. It was torn down in 2013 to make way for the expansion of the Union Building.

Kendall Hall was opened in 1952 as a women’s dormitory. It sat on the south side of Highland Street, an area now occupied by the Business Leadership Building. The Intensive English Language Institute was housed in this structure following a renovation in 1978. 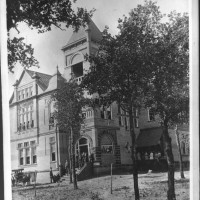 Students pose on the steps and in the windows of the Normal Building. The image is undated. Image courtesy of the Denton Public Library. 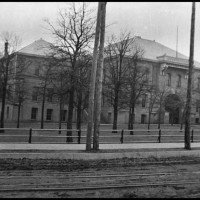 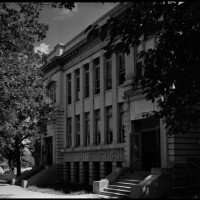 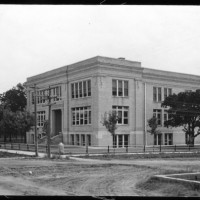 The Manual Arts Building stood on Avenue B and Mulberry Street, roughly where the General Academic Building stands today. This image was part of a book of images of campus that was compiled in the mid-1900s. 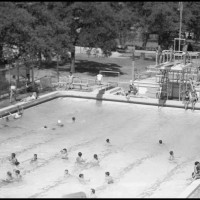 UNTA_U0458-100-853-03 Students enjoy a summer day in the swimming pool on campus. The site is now occupied by the Eagle Student Services Building. The image is undated. 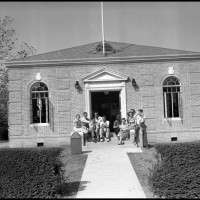 UNTA_U0458-098-713-02 Students pose on the steps of the Post Office. The structure was built in 1939 and was used by the Post Office until the first Union Building opened after World War II. 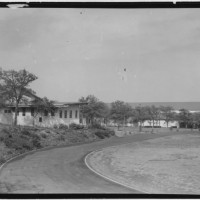 The Men’s Gym and the Harriss Gym sat on the north end of the first football field on the UNT campus. The football field was located in the space now known as the Library Mall. The Men’s Gym site now holds the Hurley Administration Building. The Harriss Gym site was first turned into a parking lot on the east side of the Administration Building. Between 1973 and 1976 the area was divided between a walkway and a seating area for the second Union Building. 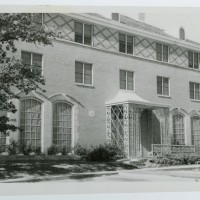 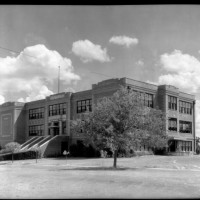 The Education Building housed the Demonstration School on the top floor and held college education classes on the floors below. This photo is undated. 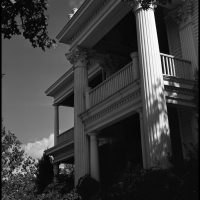 Photograph of the President’s House standing from 1909 to 1958. The photo is taken from the ground up to the second floor balcony. 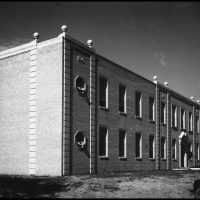 Photograph of the Journalism building, which was built in 1949. In 1991, it was renamed Scoular Hall, in honor of Florence Scoular, the longest serving director of the home economics department. The building was demolished in 2013 for the expansion of the new Union building.