Today a new historical plaque commemorating the former location of the Harriss Gym was unveiled at the southwest corner of the Hurley Administration Building (near the main entrance to the Union). Along with being the site of women’s athletic events, the Harriss Gym served as the site of many social events on campus from the 1920s through the mid-1950s. The gym was named in honor of Beulah Harriss, North Texas’s first female physical education teacher and the founder of the Green Jackets. Harriss was also active in the Denton community at large. She helped establish a Girl Scout Troop in Denton and was a founding member of DATCU.

Local teen Elise Clements is to thank for the Harriss plaque on the UNT campus, as well as a state historical marker honoring Harriss in Quakertown Park at the former site of the Denton Girl Scout Little House. Clements learned Harriss’s story while researching the history of the Girl Scouts in Denton. Clements did research in the Portal to Texas History and UNT Special Collections while preparing her successful application for the Quakertown state historical marker. After viewing the Green Jackets Collection in UNT Special Collections, Clements said, “I was able to actually hold a piece of [Harriss’s] history, which brought her story to life for me.” Clements received a Silver Award, the highest honor a Girl Scout in the sixth, seventh, or eighth grade can earn, for her efforts to secure a historical marker for Harriss. At the Harriss Gym plaque dedication, President Smatresk promised Clements a scholarship to attend UNT in recognition of her dedication to local history.

Ken Bahnsen, one of Harriss’s former students and a UNT athletic legend in his own right, spoke at the UNT plaque ceremony to share his memories of “Miss Beulah,” as she was affectionately known by her students. Bahnsen said he was impressed that Harriss always greeted people by name when she saw them on campus. 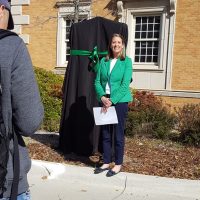 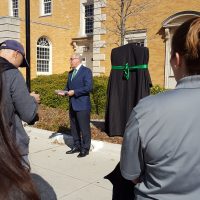 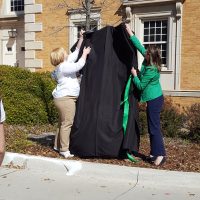 Elise Clements and Melissa McGuire unveil the Harriss Gym historic marker at the southwest corner of the Hurley Administration building on the UNT campus. 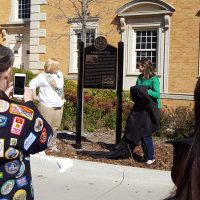 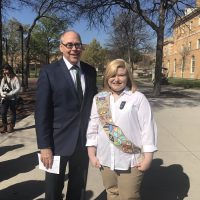