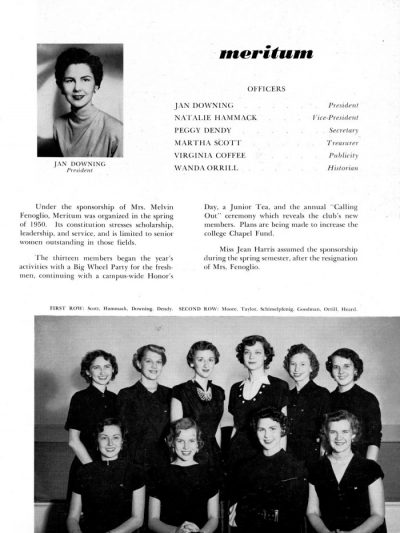 The Meritum Honor Society was founded on April 19, 1950 with fifteen senior women selected by a faculty committee based on their leadership, scholarship, character, and service. The goals for this new organization were to promote cooperation among honor societies, promote college loyalty, advance the spirit of service and fellowship among college women, maintain a high standard of scholarship, recognize and encourage leadership, and develop a finer type of college women. 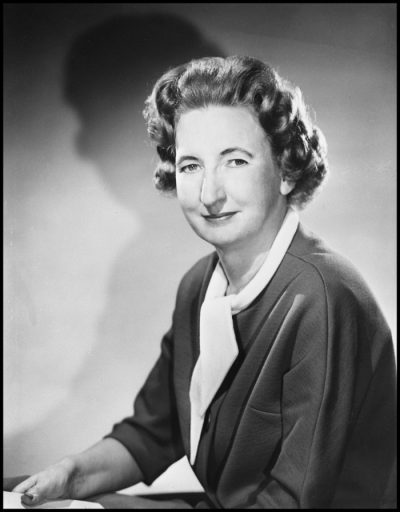 In 1966, Meritum petitioned for affiliation with the national organization Mortar Board, because it stressed the same ideals as Mortar Board. In April, 1968 Mortar Board officially accepted the University of North Texas chapter. Two national Mortar Board officers, Mrs. J. E. Evans and Mrs. William T. Jones, conducted the installation into the Mortar Board. The faculty advisors at this time were Imogene Dickey, the Dean of Women; Mrs. David Webb, wife of the Library director; and Mrs. Don Colegrove, a part-time member of the journalism faculty.  The newly elected members were chosen from the candidates who applied and who would be seniors by the coming fall semester. The calling out ceremony for new members continued with tradition by being held on the north steps of the Library Building (now Sage Hall). Dr. Louise Allen, of the Education faculty, gave the speech during the ceremony. She stated, “to meet the world of the 21st century with assurance and competence we must find some way to use our knowledge – individually and collectively – in a creative manner.”

New members often learned of their acceptance when a senior member, dressed in cap and gown, interrupted a class they were attending to read an announcement of their induction into the organization. 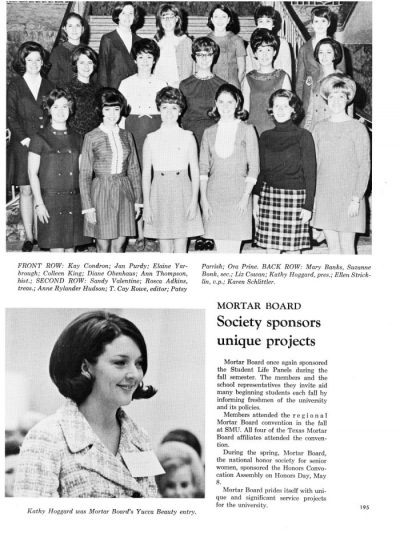 Members of Meritum / Mortar Board were involved in activities and projects to help campus (the Big Wheel Dance) and off campus (giving a Christmas party for the children of the Cumberland Children’s Home). The event that they are most famous for is Honors Day, which they established in 1950 to recognize outstanding students and professors. The increase in awards presented at graduation ceremonies was the impetus for Honors Day. Graduation ceremonies became more streamlined and students and faculty could be honored on a day set aside for that purpose. 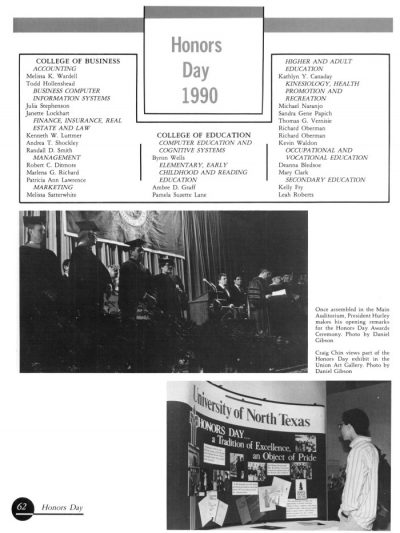 Among those that gave speeches at Honors day were: Dr. Arthur M. Sampley, who gave a speech titled “The Texan’s Heritage;” Dr. O. J. Curry, “Opportunity and Responsibility;” and Dr. Florence Scoular, “After Honors, What?;” Dean Dwane Kinery stated, “I challenge you to look beyond the mere acquisition of knowledge, to employ the productive kinds of intellectual functioning. We need to apply this knowledge to learn to analyze, to create, to make judgments.” 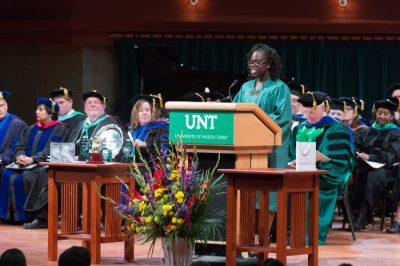 In the 1970s, Mortar Board started to hear criticisms that it was an all-women’s organization. In 1975, that changed after the passage of Title IX, which banned gender discrimination. Title IX opened doors for women to participate fully in sports and other academic possibilities, and it also brought men opportunities to participate in and be honored with Mortar Board membership.