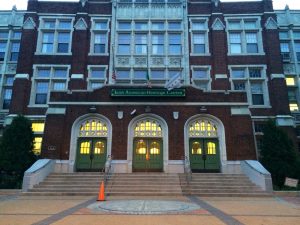 Every year since 1991, the President of the United States has issued a proclamation declaring the month of March to be Irish-American Heritage Month, honoring the contributions of Irish immigrants and their descendants to American life and culture. Here are just a few government publications to help you celebrate Irish-American culture today and throughout the month of March:

Four Dubliners—Wilde, Yeats, Joyce, and Beckett: Richard Ellmann was a widely-respected American literary critic who wrote important biographies of several Irish authors. In 1982, he gave a series of lectures at the Library of Congress discussing the lives and careers of four of Ireland’s most important authors: Oscar Wilde, William Butler Yeats, James Joyce, and Samuel Beckett. The lectures were originally published separately in four chapbooks, and then in 1986 they were revised and brought together in this collection, which also points out some intriguing connections among these authors. Audio recordings of the original lectures are available at the Library of Congress.

Some Irish Plays: A Selection: The Federal Theatre Project was a welfare measure set up during the Great Depression to support the dramatic arts as a social and educational force by providing jobs for out-of-work theatre professionals, and by providing affordable, enriching entertainment for the masses, especially those who could least afford to spend their meager income on artistic pursuits. This bibliography list several Irish plays, both classic and popular, written from 1899 to 1930, providing for each a brief synopsis and a list of the (usually modest) production requirements. Because of their educational value, simple sets, and small casts, these plays are ideal for staging by amateur and school groups.

“Irish Ethnic Recordings and the Irish-American Imagination,” in Ethnic Recordings in America: A Neglected Heritage: The American Folklife Center was established by Congress in 1976 “to preserve and present American folklife.” Their first major public event was a conference discussing sound recordings of various ethnic musical traditions in the United States. The presentations at that conference became the basis of a 1982 book. Irish-American folklorist and musician Mick Moloney’s chapter on Irish recordings explores several strains of Irish-American music, including works by Irish-American composers trained in the western European classical tradition, vaudeville comedy numbers and similar “stage-Irish” songs, traditional Irish dance tunes, and hybrid forms that combine these strains with traits of American popular music. He also discusses the surge of American interest in Irish folk music during the 1960s and 70s that was stimulated by the popularity of Irish performers such as the Clancy Brothers and Tommy Makem.

If It Wasn’t for the Irish and the Jews: Irish and Jewish Influences on the Music of Vaudeville and Tin Pan Alley: In 2009, Mick Moloney gave an illustrated talk on a largely forgotten, yet highly influential, period in American popular music. This Web site provides a summary of the lecture and a recording of the Webcast.

Irish Tin-Whistle Instruction Books: A Bibliography: The tin-whistle, also known as the penny-whistle, among other names, is inexpensive (although it does cost a bit more than a penny!) and easy to play, making it one of the most popular instruments for playing traditional Irish folk music. This historic reference aid from the American Folklife Center lists several instruction books that were published in the 1970s in Ireland, the United Kingdom, and the United States.

These articles from Smithsonian magazine provide background on the history and traditions of Irish cuisine and also include some delicious recipes to give you a taste of traditional Irish culture.

Classic Irish Soda Bread: Learn how to make authentic Irish soda bread in the traditional way, with out all the fancy extras.

A Brief History of Ireland’s Fortune-Telling Mashed Potato Dish: Colcannon, a side dish combining mashed potatoes with cabbage or kale, is traditionally eaten at Halloween, but its green hue also makes it perfect for St. Patrick’s Day.