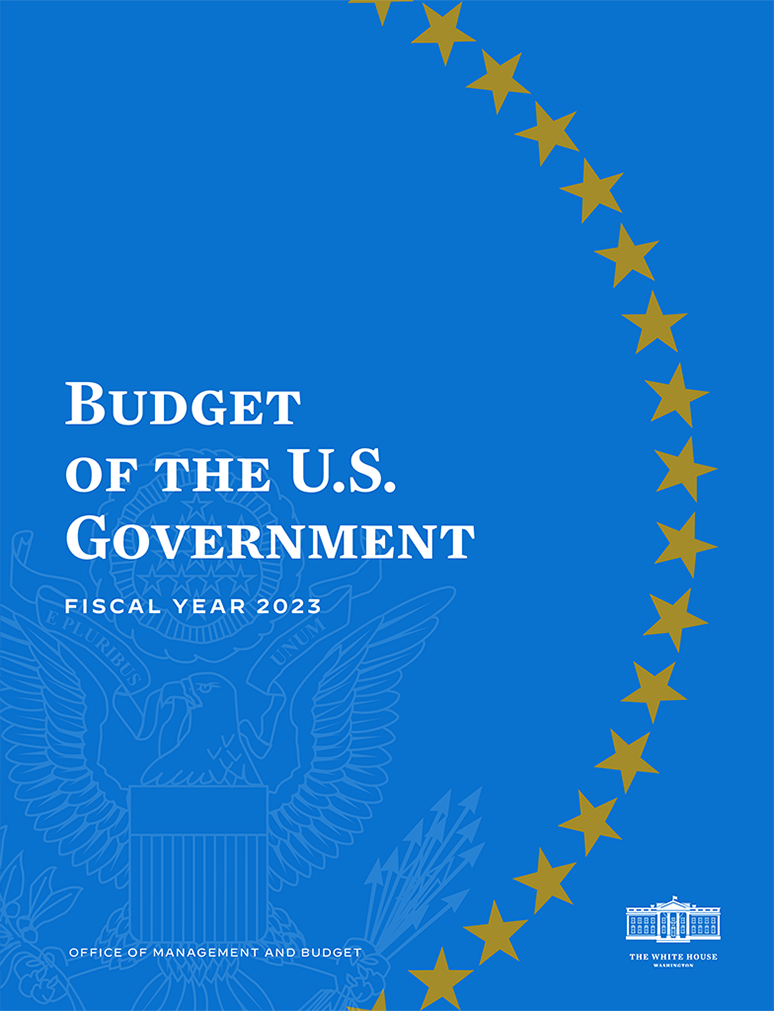 Every year since 1921, when the Budget and Accounting Act gave the President of the United States the overall responsibility for planning the annual Budget of the United States Government, the Government Publishing Office (GPO) has worked with the White House Office of Management and Budget (OMB) to produce and distribute the President’s budget proposals for the coming fiscal year.

The President’s Budget for Fiscal Year 2023, which runs from October 1, 2022 to September 30, 2023, is now available for anyone with access to a computer to read online for free. GPO has signed and certified the PDF files to assure users that these online documents are official and authentic. They should be viewed using Adobe Acrobat or Reader version 7.0 or higher.

In a few weeks a paper copy of the FY 2023 Budget will be available for reading at Sycamore Library. A paper copy can also be pre-ordered from the U.S. Government Bookstore if you would like to purchase your own personal copy.

FACT SHEET: The President’s Budget for Fiscal Year 2023 is a press release from the White House Briefing Room that highlights economic achievements of the past year of the Biden administration and previews the President’s vision for further recovery from the pandemic during the next fiscal year.

The U.S. Constitution gives Congress the “power of the purse,” but does not prescribe how that power is to be exercised, nor does it provide a specific role for the President with regard to budgetary matters. Instead, various statutes, congressional rules, practices, and precedents have been established over the years to create a complex system in which multiple decisions and actions occur with varying degrees of “coordination” (to put the matter politely). As a consequence, there is no single definitive “budget process” through which all budgetary decisions are made.

This oversimplified list of steps, therefore, can provide a general idea of how the federal budget is created and implemented, but keep in mind that the reality is never so orderly or linear:

Formulation of the President’s Budget

Execution of the Enacted Budget Laws

For a more detailed description of the budgetary process that occurs today and how it developed over the years, see the Congressional Research Service report Introduction to the Federal Budget Process. This CRS report also includes appendices that provide a glossary of budget-process-related terms and a flowchart of congressional budget process actions.

Organization of the Budget

The Budget of the United States Government is divided into three main volumes and is accompanied by several supporting documents and supplemental materials provided to enhance one’s understanding of the Budget.

The title volume—a scant 149 pages long—is by far the most succinct volume. It contains the Budget Message of the President, which explains the President’s budget priorities, and it provides summary tables of the President’s proposed plans for the budget and any recommended taxes.

This volume provides analyses that highlight specific subject areas or provide other significant presentations of budget data to place the budget in perspective.

Here you will find

Note that this entire volume is not available online yet, so only titles will display for certain chapters. The content of these chapters will be posted later as they become available.

An Appendix to the Budget of the U.S. Government might sound like an afterthought, but it is the bulkiest volume and presents the most detailed information about the individual programs and appropriation accounts that constitute the budget. It is intended primarily for use by the congressional appropriations committees, since they are the ones who will make the final decisions about how much money will be spent and on what.

Historical Tables provide data on budget receipts, outlays, surpluses or deficits, federal debt, and federal employment over an extended time period, generally from 1940 or earlier to several years into the future. The data are adjusted as much as possible to be consistent with the current budget and to provide comparability over time.

Additional chapters of the Analytical Perspectives, as well as other miscellaneous supporting documents and supplementary materials useful for understanding the budget, will be released as they become available.

Explore the Budget of the United States Government for Fiscal Years 1996 to the present at the GovInfo.gov website.

Historical editions of the Budget of the United States Government from 1921 to 2021 are available on the Federal Reserve Archival System for Economic Research (FRASER) website. Be aware that this is not an official version of the Budget of the United States Government, and neither the authenticity nor the completeness of the data can be guaranteed. FRASER is provided through a partnership between GPO and the Federal Reserve Bank of St. Louis. (Note also that the dates of the Appendix and Special Analysis volumes may differ.)

Visit us in the Sycamore Library at UNT, or send us a message at govinfo@unt.edu if you have any questions or would like more information about the U.S. Budget or any other federal, state, or local government information.