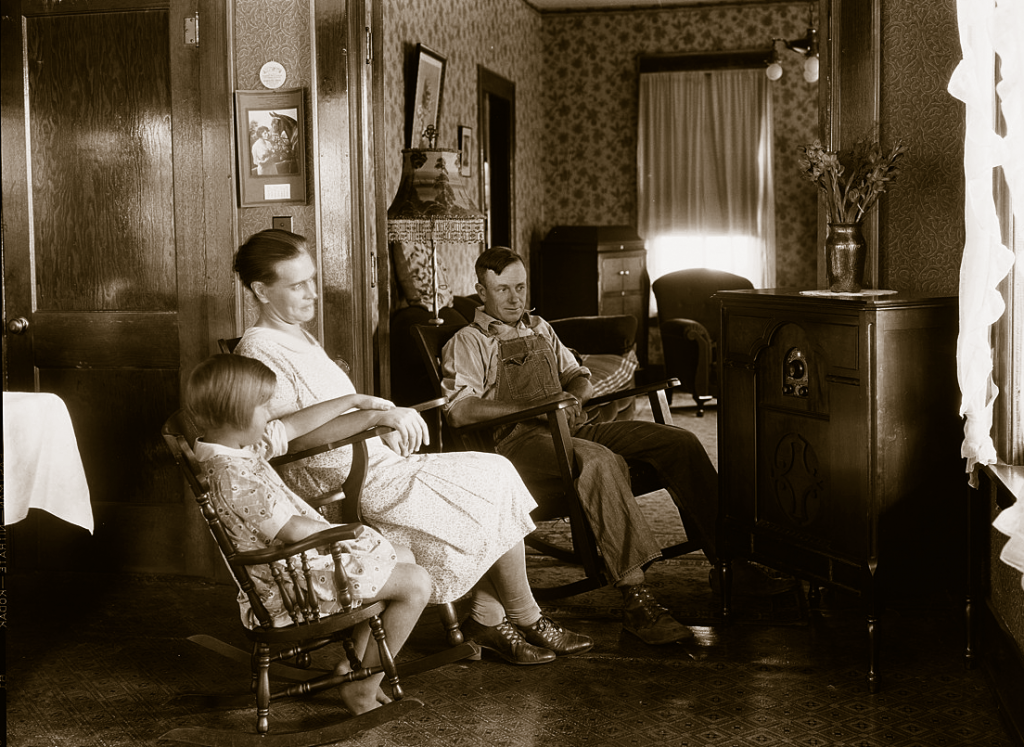 The Birth of Aunt Sammy

On Monday, October 4, 1926, the USDA-sponsored radio show Housekeepers’ Chat premiered, and their first order of business was to introduce Aunt Sammy, who would serve as the official radio representative of the U.S. Bureau of Home Economics for the greater part of a decade. The show was a revamping of an older show called Housekeepers’ Half Hour, updated to reflect the latest trends and technological developments.

Radios were relatively inexpensive and were battery-powered, so they could be relied upon even when power lines were down. A radio show that provided a familiar voice over the airwaves was a source of comfort and stability to those living in rural areas, especially farmers’ wives, who could feel isolated and unsupported in their remote locations.

Commercial companies had been finding great success using the medium of radio to promote their products with “live trademarks” such as Aunt Jemima, Ann Pillsbury, and the most successful of all, Betty Crocker. Like these spokeswomen before her, Aunt Sammy was a fictional character, not a real person.

Representing the domestic side of Uncle Sam, she was sometimes referred to as his sister, sometimes as his wife—the exact nature of their relationship was never made very clear. No visual images exist of Aunt Sammy, and because of the difficulty of transmitting radio signals over long distances, the USDA would send scripts to each individual radio station, where a local actress would enact the part of Aunt Sammy in the local accent. Even these performances have been lost to history, since the shows were performed live, and none of them seems to have been recorded.

The Women Behind Aunt Sammy

Three women at the Bureau of Home Economics contributed to creating the character of Aunt Sammy:

Ruth Van Deman, Associate Specialist in Charge of Information at the USDA’s Bureau of Home Economics, was responsible for preparing the menus and recipes that were broadcast. For the most part these were unpretentious and easy to prepare, though there were occasional forays into more exotic fare. (One of the menus intriguingly mentions “fried brains and eggs,” but alas, there is no corresponding recipe.)

This is how Van Deman expressed her philosophy:

“This is no caviar and truffle service for jazz-jaded appetites. We are striving to serve that great substantial class of women who are home-makers. We aim to make the menus simple, well balanced, delicious and also adaptable to the food supplies in all parts of the country.”

Josephine Hemphill, who taught journalism and was a graduate of Kansas State Agricultural College, wrote the chatty, conversational part of the scripts. She was convinced that most people are “just folks,” and preferred a friendly, informal approach to broadcasting. Later she worked for the Food and Drug Administration, and in the 1960s she authored a history of the FDA for teenage readers entitled Fruitcake and Arsenic.

Fanny Walker Yeatman, sometimes referred to in Housekeepers’ Chat as “The Recipe Lady,” was responsible for testing and tasting recipes that were developed in the kitchen of the Bureau of Home Economics. 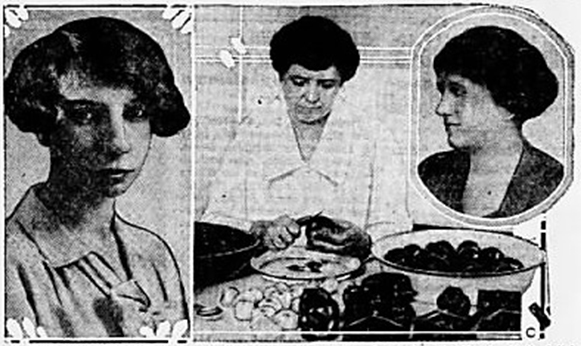 What Aunt Sammy Talked About

Today Aunt Sammy is mainly remembered for her recipes and cookbooks, but she also chatted about clothing, laundry, furniture, appliances, floor care, and other family and household matters scientifically researched by the Bureau of Home Economics. She would frequently promote the latest kitchen gadgets, but because it was a government agency, the Bureau of Home Economics was forbidden from recommending specific brands.

At times Aunt Sammy would even give advice on raising children; and like most homemakers, Aunt Sammy’s interests extended beyond the daily domestic tasks of cooking, cleaning, and doing laundry. She was also a bit of a raconteur who told jokes, commented on world affairs, and kept her audience up to date on the latest fads and trends, all in a folksy, friendly style that made her seem like a member of the family to many listeners.

Audience members were encouraged to write Aunt Sammy for copies of recipes as well as for advice on everything from what a vitamin is to how to exterminate rats, mice, and cockroaches.

Aunt Sammy’s recipes came from several sources. Some were developed from scratch in the USDA’s experimental kitchens; others originated outside of the USDA—many were already well-known, traditional American dishes—but all were tested, evaluated, and frequently improved in various ways, usually to make them more nutritious (for example, by reducing the amount of sugar) or simpler to prepare. Many of the recipes resort to canned or premixed ingredients for the sake of convenience. 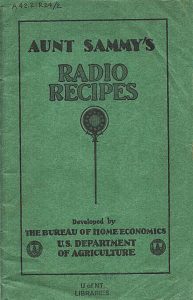 Radio is not a particularly suitable medium for presenting recipes, so almost from the day the show aired, there was an enormous demand for printed copies of the menus and recipes.

At first listeners were sent mimeographed copies of a few week’s worth of recipes at a time, with holes punched in the margin so that the pages could be added to a notebook and collected.

In 1927 a printed compilation of recipes broadcast from October 1926 to June 1927 was published, entitled Aunt Sammy’s Radio Recipes. In the introduction it was emphasized that this was not a “complete cookbook,” but rather a selection of the most popular recipes from Aunt Sammy’s show. Many more recipes and guides to food selection and storage were available in the hundreds of bulletins and leaflets distributed across the country by the USDA.

The public’s demand for these recipes was insatiable, and within a month the sold-out pamphlet was reprinted. Here are a few samples of what readers could find in this pamphlet: 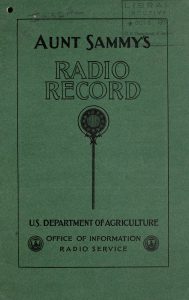 After the first edition of Aunt Sammy’s Radio Recipes was published, new menus and recipes continued to be broadcast, and new requests for the recipes continued to pour in. As a way for the regular listeners to Housekeepers’ Chat to keep up with this new information, a mostly blank notebook was published, with pages to write down the menus and recipes as they were broadcast on the radio. 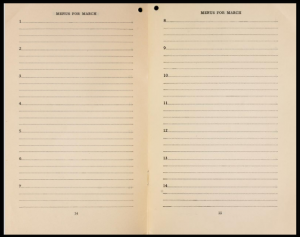 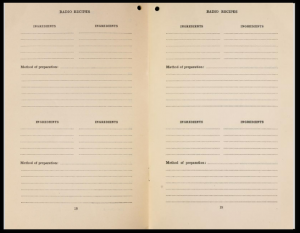 The introduction to this book resembles an episode of Housekeepers’ Chat. There is a short, humorous dialogue between Aunt Sammy and her relative Uncle Ebeneezer; an explanation of how to plan meals according to the five main food groups; and some saucy answers to frequently asked questions about table manners and how to set the table for a formal dinner.

This publication also includes a four-page index, which makes the recipes much easier to  search. It also includes a chart defining what oven temperatures are meant when the recipe says, for example, “moderate oven,” and another chart defines equivalent measures, such as how many tablespoons go into 1/4 cup, or how many cups go into a gill.

In 1932, Aunt Sammy’s Radio Recipes Revised was published in a braille edition. Contrary to popular rumors, however, this was not the first cookbook to be printed in braille. According to Laurie Block’s blog post “Cooking with Braille,” this book was preceded by at least three other cookbooks published in braille by the American Printing House for the Blind.

Here are a few recipes from Aunt Sammy’s Radio Recipes Revised that did not appear in the earlier collection:

Aunt Sammy’s popularity faded during the Great Depression, and the questions listeners sent in were less likely to be requests for recipes and more likely to be requests for personal advice. After 1934 the radio show was renamed Homemaker Chats, and Aunt Sammy, her recipes, and her folksy anecdotes no longer appeared on the show. Instead, an anonymous narrator presented factual information in a dry, no-nonsense manner. By 1946 the show was no longer on the air. 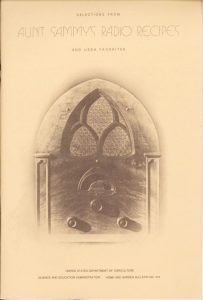 The year 1976 marked both the 50th anniversary of Housekeepers’ Chat and the United States Bicentennial. In commemoration of Aunt Sammy’s 50th birthday, the Consumer and Food Economics Institute of the Agricultural Research Service prepared a selection of recipes from the first edition of Aunt Sammy’s Radio Recipes, supplemented by a selection of popular recipes that had appeared in 1976 USDA publications. All the recipes were retested and tasted in the laboratory for the new publication.

Here are a couple of recipes from each of the time periods represented in this publication: 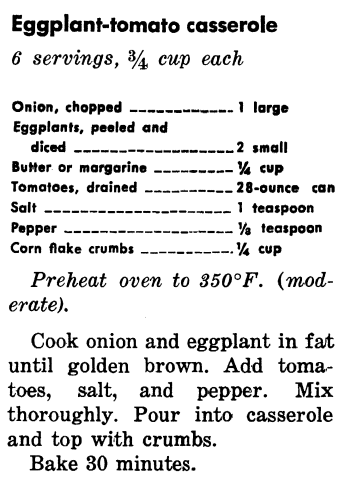 Visit the Government Information Connection in Sycamore Library to explore these and hundreds of other recipes published by U.S. and Texas government agencies.

If you need assistance with finding or using government information, please visit the Service Desk in the Sycamore Library during regular hours, contact us by phone (940) 565-4745), or send a request online to govinfo@unt.edu.

If you need extensive, in-depth assistance, we recommend that you E-mail us or call the Sycamore Service Desk at (940) 565-2870 to make an appointment with a member of our staff.