On September 16, 1890, a man dressed in a frock coat and top hat stood on the steps of the Denton County Courthouse and addressed the citizens of Denton, Texas.  President Joshua Crittenden Chilton’ s speech opened the Texas Normal College and Teachers Training Institute, now known as the University of North Texas.  The new educational institution started classes before a site for the campus had been chosen.  After the speech students were directed to a structure on the northwest corner of the square that would serve as the school site for the first year.

Classes were held upstairs at a hardware store and students were issued tickets for each class they would attend. Students in the inaugural class of fall 1890 included men and women from the north Texas area as well as 28 Native American students from Oklahoma, an area then known as Indian Territory. It took five months for a site to be agreed upon and acquired for the new institution’s campus.  The first structure built would be known as the Normal Building and would open in 1891. 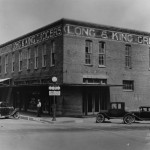 This is an image of the location of the first UNT classes in 1890. The Long and King Grocery was the occupant of the site at the time this photograph was taken. Today a furniture store occupies this spot. 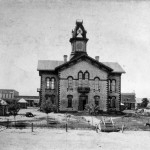 President Chilton delivered his speech while standing on the steps of Denton’s courthouse. The courthouse finished construction and opened in 1877. The structure was demolished in 1895 when the new, and current, courthouse was erected 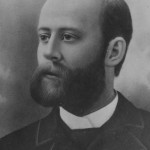 Joshua C. Chilton was the first president of the university, serving from 1890-1893. 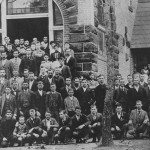 The 1894 student body seated on the steps of the Normal Building, the first permanent university structure. This building was located at the corner of Hickory and Avenue B. 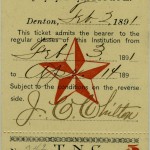 An example of a ticket issued to students attending classes at the Texas Normal College and Teachers Training Institute. This ticket is dated 1891 and signed by President Chilton. 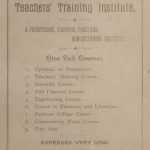 This is a page from a catalog advertising courses at the new Texas Normal College.

One Response to “A New University in North Texas”