It is impossible to imagine UNT without its jazz program nowadays; the two are all but synonymous. In the 1920s, however, the forerunner to the formal presence of jazz at North Texas was formed somewhat out of necessity, as an ensemble to accompany silent films, and starting in 1927, to support a Saturday night stage show which became a local institution in a prairie college town not otherwise known for its night life. The stage band, under the directorship of Professor Floyd Graham – or “‘Fessor Graham” – became known as the Aces of Collegeland. Numerous performers who went on to considerable success appeared with the group, including Louise Tobin, Moon Maids, who joined Vaughn Monroe’s band, Jimmy Giuffre, and Pat Boone.

The Aces of Collegeland and the participation of student arrangers in its activities gradually generated an interest in – and a need for – qualified training in stage band work. There were not many student arrangers, but an alto saxophonist named Gene Hall, from Whitewright, TX, advanced to the point where he was arranging for both Fessor’s band and the marching band.

Hall finished a bachelor’s degree with a dual major in music and education in 1941. Expecting to be drafted at any time, he began graduate studies at North Texas. Years later, he recounted:

“… I come back to North Texas, and [Dean Wilfred] Bain gives me a graduate assistantship. I have three chores. One of them seems ridiculous now. One of the things I had to do was patrol the practice room area at certain times to be sure no one was practicing or playing jazz or popular music.”

But Dean Bain ultimately had other ideas. When Hall approached Bain to propose a thesis topic, Bain told him he already had one picked out for him: to write a method book for teaching jazz on the college level. Hall finished his thesis in 1944, while working variously as a

band director, a touring musician, and a shoe salesman. In 1944, he replaced Don Gillis as staff arranger at the radio station WBAP in Fort Worth.

In 1947, just as Hall was about to move to New York to begin doctoral studies and work with Don Gillis (UNT’s first MM in composition, who also donated his papers and compositions to the Music Library), Bain’s successor as dean of the School of Music, Walter Hodgson, offered him a job at North Texas, to take over the still-incipient jazz studies program. Through careful diplomacy, Hall obtained approval from the curriculum committee for a “dance band” program because, in his words, “jazz was such a negative term in those days.” The ensemble’s name, “Laboratory Dance Band,” is the origin of the famous “Lab Bands” we know today.

The resistance to jazz in academia certainly did not end with the establishment of the program. The next blog posting will describe the Gene Hall era of the “Dance Band” and the One O’Clock Lab Band’s meteoric rise to international prominence under Leon Breeden. 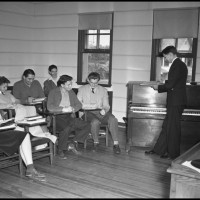 Photograph of Floyd Graham, North Texas music professor, in front of his class. 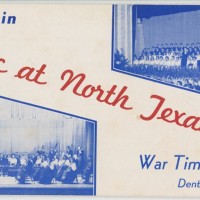 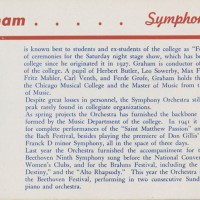 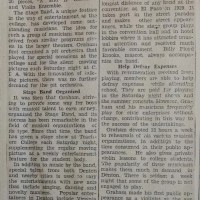 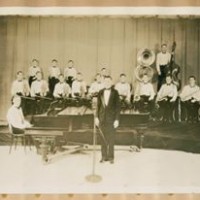 2 Responses to ““Jazz was such a negative term in those days”: The Early Days of the UNT Lab Bands”