The Texas Normal College and Teachers Training Institute, now known as the University of North Texas, opened on September 16, 1890 with 80 students in attendance. There were two concerns for the new school – where to hold classes and how to recruit enough students. The first issue was solved by renting space above a hardware store just off the square. The second issue was partially solved by enrolling twenty-eight members of the Creek (Muscogee) Nation from “Indian Territory,” now Oklahoma, to attend classes.

Some accounts state the federal government paid the expenses of the Creek students, but UNT no longer has records to support this claim. The Creek students appear to have been brought in for the second term, which started on November 25, 1890.  At that time there was a forty week school year which was divided into four quarters from September 16 to June 21, 1891. Overall enrollment was estimated to be from 150 to 185 students during that time.

The students came to a small town. Denton’s population was estimated to be between 3,500 and 4,000 people at the time of the opening of the Normal College. There were no dormitories, so rates were set for boarding houses. The rates for two students to a furnished room started at $2.50 per week. Two students in an unfurnished room could be rented for as little as $2.00 per week.

Among the courses of study open to students at this time were: teacher training, science, business, classical, as well as engineering and surveying. Tuition for a full year was set at $48.00.

In Fall 2014, 540 students at the University of North Texas identified as Native American. 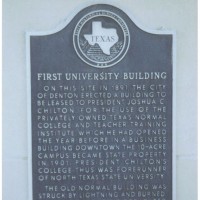 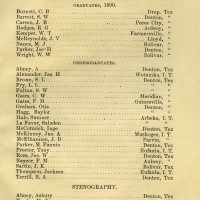 Students attending the Normal were listed in the back of the catalog by the course of study they had selected. Student’s place of origin was listed beside their names. The Native American students were identified by town and I. T. for “Indian Territory.” 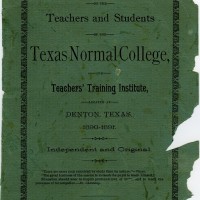 The cover of the Texas Normal College and Teachers Training Institute 1890 -1891. This slim volume provided students information on the school, the courses of study, and explained the costs associated with attending the Normal College. 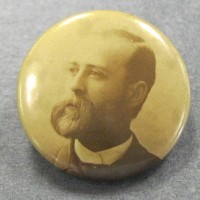 Joshua Crittenden Chilton was the founder and first president of the Texas Normal College and Teachers Training Institute. He served as president from 1890 to 1893. This button is decorated with his image. 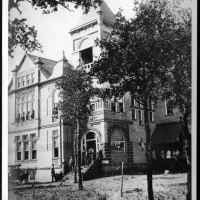 First building on the Texas Normal College and Teachers Training Institute campus, located on corner of Hickory and Avenue B. The building was constructed 1891 and burned to the ground in 1907 after being struck by lightning.