Did you know that the University of North Texas was the backdrop for the greatest football comedy of all time? A film so great it includes this scene of Jason Bateman and Sinbad doing a touchdown boogie?

These days, when UNT students want to cheer on the Mean Green, they attend a game at the new Apogee stadium, the centerpiece of the Mean Green Athletic Village. But 24 years ago, there were TWO football teams on campus fighting for students’ attention. In 1991, the University of North Texas’s Mean Green Eagles were ranked #1 in Sporting News’ pre-season poll and were looking forward to a promising season. But they graciously shared Fouts Field with another green and white clad team. The fictional Texas State Armadillos competed for attention on and off field and boasted a star-studded roster of actors and comedians including Scott Bakula, Robert Loggia, Jason Bateman, Kathy Ireland, and Sinbad.

The University of North Texas, its buildings, and its football field served as backdrop for the 1991 football comedy film Necessary Roughness. In the movie, the Texas State Armadillos follow a string of successful seasons with a host of NCAA violations. The scandal forces them to forfeit their previous victories and clean house, leaving them with no coaches and only a single remaining player. Facing new restrictions and an unsupportive administration, their only hope is to hold try-outs and cobble together a 17-man team for ironman style football. Scott Bakula joins the team as Paul Blake, a 34-year old quarterback whose bright future playing college ball was cut short when his father died.  To be eligible to play ball, Blake has to enroll in college full-time and keep his grades up or get cut from the team.

The basic plot was inspired by “Ponygate,” the massive football scandal involving Southern Methodist University in the late 80’s. The NCAA invoked the “death penalty” due to continued violations, forcing SMU to cancel their entire 1987 football program.

During filming, UNT students had multiple opportunities to be extras both on and off the field. For the use of its facilities, the University was compensated $65,000. As an added bonus, 24 RTVF students gained valuable filming experience working with Paramount Pictures staff as production assistants during filming.

Special Collections staff member Lisa Brown attended UNT that year and recalls fondly what it was like to run into celebrities on your way to class. “I watched a scene being filmed with Scott Bakula and Sinbad in front of the Library,” she said. “There was a dolly set along the library mall for a tracking shot, and I remember thinking Scott Bakula was a lot cuter in person!”

In addition to movie stars, Necessary Roughness also featured a slew of famous athletes during a scrimmage scene where the Armadillos face off against convicts from the Texas State Penitentiary. Jerry Rice, Dick Butkus, Herschel Walker, Tony Dorsett, and championship boxer Evander Holyfield give the Fighting Armadillos a run for their money.

Arrested Development fans should appreciate watching Jason Bateman in his second earliest film role (his breakthrough role was 4 years prior, in Teen Wolf Too). How did Bateman enjoy his time in little d?  Bateman, playing fullback, said in an interview with yearbook staff that he liked Denton and had visited before for his “girlfriend’s step-sister’s wedding.”

The majority of the film was shot on the UNT campus, but other locations around the DFW area got their moment in the spotlight.  The film’s requisite team-on-team fight scene was shot at Billy Bob’s Bar in Ft. Worth.

Watch the movie and see if you recognize any of your favorite places on campus, or take stock of how much campus has changed in the 24 years since the movie was shot. You can check out the film on DVD with your UNT ID at the UNT Media Library in Chilton Hall or stream it on Netflix or Amazon Prime. 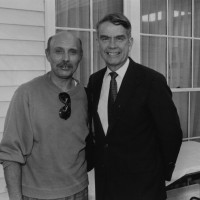 Dueling mascots! UNT’s Eppy the Eagle faces off against Rowdy, mascot for the Fighting Armadillos. Eppy was the official North Texas mascot between 1983 and 1995. 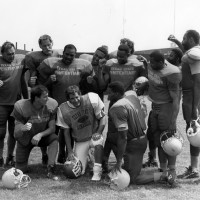 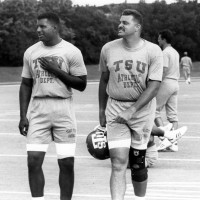 Duane Davis (left) and Sinbad (right) were unlikely players for the TSU Armadillos. Davis played Featherstone, a running back with a heart of gold, but hands of stone. Sinbad played graduate teaching assistant Andre Krimm, recruited by Blake to the defensive line. 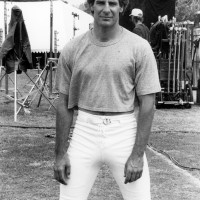 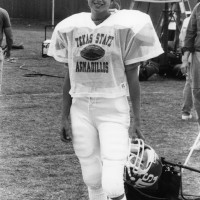 Lucy Draper (Kathy Ireland) is recruited from the women’s soccer team as a kicker. 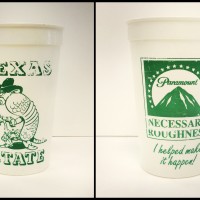 Students that participated as extras were treated to hot dogs, sodas, and TSU swag. This cup is part of UNT Libraries staffer Lisa Brown’s private collection!