As part of the University of North Texas’ 125th anniversary celebration, the Media Library presents the first in a series of posts paying tribute to our university’s motion picture history. While many may be aware of our starring role in the 1991 comedy, Necessary Roughness, Denton’s relationship with motion picture production actually began in 1913 when the Denton Chamber of Commerce and a local movie theater owner collaborated to produce their own film, Denton City of Education. Denton continued to play a role in motion picture history by hosting the Southwestern Premiere of Bonnie and Clyde (1967) at the Campus Theater. The University itself has been an incubator for Hollywood talent and counts among its alumni numerous actors, writers, and directors.

One of our University’s first stars, Joan “Rosebud” Blondell (1906-1979), attended North Texas State Teacher’s College from 1926-1927. Born in New York, Joan spent most of her childhood traveling the world and performing with her family’s vaudeville troupe before settling on Oakland Ave. in Denton in 1926. In Denton her parents opened a dress shop, “La Mode,” and her mother acted in Denton Little Theater productions. After enrolling at NTSTC in 1926, Joan (then known as Rosebud) began entering local beauty pageants. According to her biography, Joan Blondell: A Life Between Takes, Joan even faked a Southern dialect and invented a Texas ancestry so that she could compete in the 1926 Miss Dallas pageant. After winning the title of Miss Dallas, she placed fourth in the 1926 Miss America Pageant. In November 1926 she was crowned Queen of the A&M College Rodeo and Pageant where she was escorted by 2,000 cadets. According to some reports, the cadets found Joan so appealing that they hid her luggage to delay her return to Denton.

Although her enrollment at NTSTC was brief, during this period she was active in the Lillie Bruce Dramatic Club, performed with her siblings in local Kiwanis Minstrel programs, and also performed at Dallas’ Palace Theatre. Perhaps her most highly regarded performance was a 1927 portrayal of the title role in George Bernard Shaw’s Candida. The Campus Chat reported that “one of the largest crowds in the history of the Lillie Bruce Dramatic Club” watched Joan on opening night. By this time, Joan had decided she preferred acting to studying and went to New York to pursue her dreams. She held many part-time jobs including one at a public library before her big break came in the 1930 Warner Bros. film Sinner’s Holiday alongside James Cagney. Joan continued to work regularly with Warner Brothers—making as many as 10 films a year in 1931 through 1933—and is perhaps best known for her roles in the provocative pre-code pictures of this era including Night Nurse (1931), The Public Enemy (1931), and Gold Diggers of 1933 (1933).

Joan continued to find work in smaller roles in both film and television productions until her death in 1979. She was nominated for an Academy Award for her supporting role in The Blue Veil (1951) and awarded a star on the Hollywood Walk of Fame in 1960. Though she never quite achieved the same level of stardom as her frequent co-stars Barbara Stanwyck and James Cagney, Blondell’s screen presence makes her a genuine star.

If you’re interested in seeing Joan in action, the Media Library owns many of the titles from her first years in Hollywood including Big Business Girl, Blonde Crazy, Night Nurse, Public Enemy, The Reckless Hour, Other Men’s Women, Three on a Match, Gold Diggers of 1933, Footlight Parade, I’ve Got Your Number, and Dames. For the diehard Blondell fans out there, see if you can identify Joan in one of her final acting appearances in Grease (1978).

If you have any additional information about Blondell’s life while living in Denton and attending NTSTC, please contact the Moving Image Preservation Librarian, Laura Treat, at laura.treat@unt.edu.

Explore resources related to Joan Blondell in The Portal to Texas History: 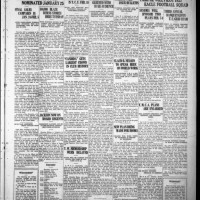 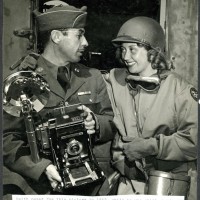 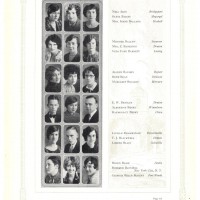