The second Union was not yet ten years old when the university started to plan an expansion of the building. The new structure would encircle part of the 1960s structure and more than double the space. According to Dr. Dorothy Pijan, the Union director at the time of the planning and construction of the 1976 facility, “As a union we provide for the social, educational, and recreational life for the members of the university community.”

The plan to expand the Union Building was approved by the Board of Regents in 1973 and the work on the expansion started in May 1973. However, the opening of the third union, planned for Fall 1975, was delayed due to labor strikes. It would was dedicated on March 7, 1976 and was called the North Texas State University Union. Built on four levels the new structure included new dining facilities, meeting rooms, a 300 seat theater, and a suite of offices for student services. An arts and crafts room was provided on the lower level. Instructors were on hand to provide expertise on ceramics, metalworking, and other creative pursuits.

One of the striking visual elements in the new union was the fiber art that hung on the wall in the main indoor courtyard. The work, Tensile Ten, was the creation of artist Francoise Grossen. It combined over 1,500 pounds of rope. The sculpture was built using one over hand knot as the only structural element to create the 30 feet by 16 foot fiber work. It was named Tensile Ten because there were five points at the top and five at the bottom where the artwork was attached to the wall of the Union. This was the second work Ms. Grossen created for an institution in Texas. The first was for the Bank of Texas in San Antonio.

The rooms in the new union received names that reflected the history of the university:

The Campus Chat was named after the first campus newspaper, first published in 1916. This area served as a food service area. There were two lines of options for dining: The Station which served breakfast and lunch and the Grill which was open for lunch and dinner.

The Corner was named after the shopping area on Hickory Street and Avenue A (known to today’s students as the Fry Street area). Although the original corner was the place for students to go to buy text books, art supplies, have a meal, or buy a new outfit, the Union’s Corner provided snacks to hungry students. The food options included ice cream, soft drinks, fruit, sandwiches, and candy.

The Rock Bottom Lounge was a part of the second Union. Both areas provided a bar/pub atmosphere in a gathering space for the members of the university.

One O’Clock Lounge was named after the premiere lab band in the College of Music. It was an open lounge with terraced seating that was located next to the south east door. The space was used by speakers, bands, events, and as a place to meet by students.

The Syndicate was named after the group of Denton businessmen who organized the founding and acquired the land for UNT in 1890 – 1891. This area was a game room with billiards, eight ball tables, foosball, table tennis, pinball machines and table games.

The Avesta was named for a student literary publication that was first published in 1917. Originally the Avesta was the name of a first floor lounge for study and music listening. The lounge was altered into seating for a food court and the name was moved to a dining facility on the second floor of the Union.

The Lyceum, the theater in the Union, was named for the first fine arts programs presented by UNT in the early part of the 20th century which were known as “lyceum numbers.” The theater was equipped to show movies as well as have live performances.

The Golden Eagle Suite was named for the alumni of the university. The Golden Eagles, alumni of 50 years, meet every year at Homecoming. This was a banquet and meeting room which would accommodate up to 140 people.

The Silver Eagle Room honored the alumni that had reached their 25th anniversary.

The Denton Suite, a cluster of three rooms, were named for men important in the early history of the University. These individuals were part of the Syndicate. The rooms were named after: W. A. Ponder, John A. Hann, and T. W. Abney.

The Studio was an arts and crafts studio that provided tools and work areas for ceramics, metal-working, and leather work. Courses and workshops were also available.

The Balcony was formal dining facility on the second floor. The room was decorated with cane back chairs, oak wood and thick carpets. 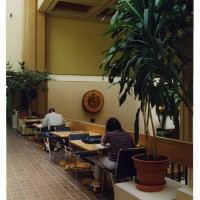 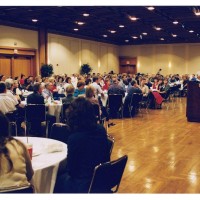 UNTA_U0458-035-019_01 A speaker addresses a gathering in the Silver Eagle Suite. This room was the largest room for events in the third union. This image dates circa late 1990s. 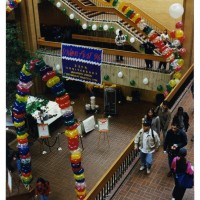 UNTA_U0458-035-018_01 Each spring the university community celebrated having a University Union with Union Day. The Union was decorated with banners and balloons, a large birthday cake was cut and pieces handed out to all comers. In addition events, games, and vendors provided entertainment and samples of products throughout the day. This image is dated 1996. 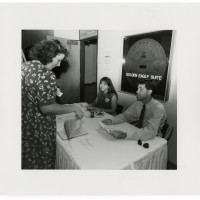 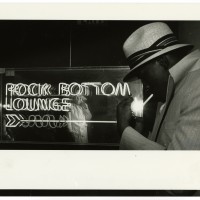 UNTA_U0458-035-016_01 A student poses next to the sign at the entrance to the Rock Bottom Lounge. This space was frequently referred to by its initials, RBL. The RBL served lunch. In the evening entertainment was varied and included live bands, television, parties, or dances. This space had its own entrance on the north side of the Union. The lounge was only open to the university community. 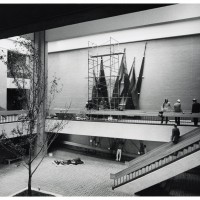 UNTA_U0458-035-013_01 The third Union being prepared for opening. The fiber sculpture “Tensile Ten” was in the process of being installed on the wall of the central courtyard. The artwork was the creation of artist Francoise Grossen. 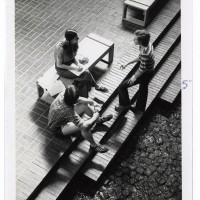 UNTA_U0458-035-012_01 Students gather in the central courtyard in the Union. One of the unique features of this area was a “river” fountain that was set below the level of the floor. The rushing water provided a peaceful background sounds to the area. This image was taken c.1976. 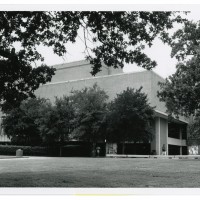 UNTA_U0458-035-010_01 The east side of the third University Union in this image. The kiosks stood near the entrances to the building. They were covered with notices of upcoming events, new course offerings, quests for new roommates, and sale notices. The image is dated 1991. 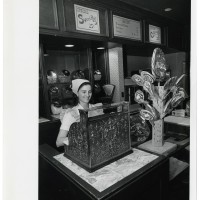 UNTA_U0458-035-011_01 The Corner was located on the west side of the Union on the second floor. It stood next to the west entrance to the University Bookstore. This image shows a student worker behind the cash register. Some of the snacks available for sale can be seen around her.