In 1972 the regents and President of North Texas State University dedicated the new library on campus. When construction for the new library began in July 1969 began on the site of the university’s original football field, the building was meant to be the latest in modern, modular design—a colorful, bright and open building of the future designed to be both a meeting place and a haven for quiet study. After numerous delays, including a legal battle over carpet, the building was occupied in 1971.

For its first years the building was simply known as “The Library.” In 1978 it was renamed the A. M, Willis, Jr. Library in honor of the long time university regent. The original plans by architects Caudill, Rowlett, and Scott called for a building to be built in three phases, all within the decade. The design consisted of a four story central building, with a wing on each side, but the two wings were never built because of budget concerns. The building cost, including furnishings and landscaping, was $21.09 per square foot for a total cost of just over $3.6 million. This was paid for with a federal grant and the sale of bonds.

The interior design team of Del and Carol Hermanowski chose a different bold, bright color for each floor so people would know which floor they were on by simply looking at the colored shelving, upholstered furniture, and bright graphics painted on the walls. The colors couldn’t have been much brighter than the ultra-shamrock, ultra-fuchsia, marigold, primary red, and primary blue. The library very quickly began outgrowing the central building. It was designed to seat 1,850 people and shelve 762,450 books. Much of the public seating very quickly was sacrificed to provide more bookshelves and staff offices for new departments, such as the University Archives, opened in 1977.

Visitors to the library were greeted by an enormous kinetic sculpture suspended above the stairwell. Unfortunately, this had to be removed several years later as university engineers said it was too heavy and in danger of falling. The library had an extensive card catalog that took up a large section of the first floor which was the only way to locate materials. Books were arranged into subject areas, rather than strictly by call number. This practice was later abandoned in favor of a call number arrangement. In December of 1973 the first computers were installed for staff use, but it wasn’t until the 1980s that the card catalog was installed on computers for public use. 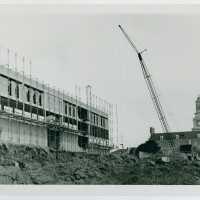 UNTA_U0458-001-001-01 Willis Library as it appeared under construction on the university’s first football field. 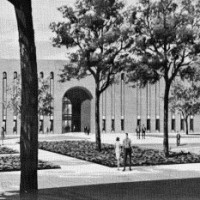 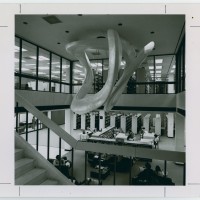 UNTA_U0458-002-002_01 The rotating sculpture designed by local artists Mike Cunningham hung above the open stairwell until university engineers made the library remove it because they were afraid the weight would make it collapse. 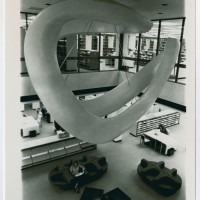 UNTA_U0458-002-003_01 This rotating sculpture designed by local artists Mike Cunningham hung above the open stairwell until university engineers made the library remove it because they were afraid the weight would make it collapse. There was plenty of comfortable seating on the first floor for students to use. 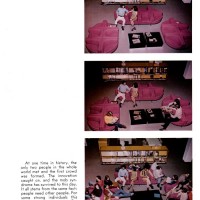 Willis Library was known for its bright colors on the walls and furnishings when it first opened. This is the only color picture that could be located of the primary red on the first floor. From the 1972 Yucca (NTSU yearbook). 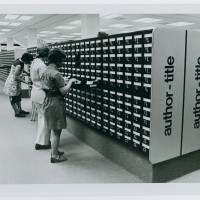 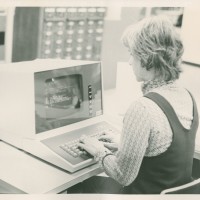 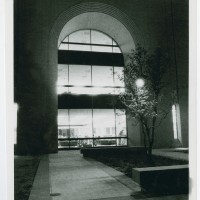 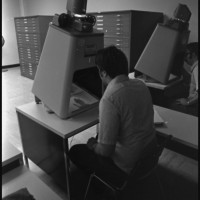 UNTA_U0458-146-4595-09 The microfilm readers were located on the fourth floor and were heavily used by researchers. 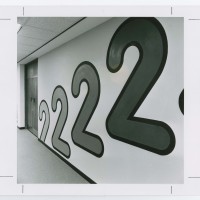 UNTA_U0458-002-007-01 Each floor had a different color of bright graphics on the walls that matched the shelving and upholstered furniture. Any guess which floor this may be? 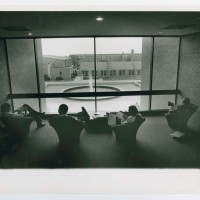 This area near the window on the second floor of Willis has always been a popular place to sit and study on the great mod furniture. 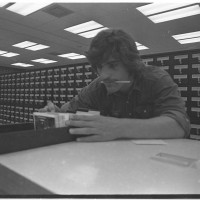 UNTA_U0458-146-4595-19 A student uses the card catalog in the new Willis Library. Looking up titles in the card catalog was much more “hands on” in the 1970s than the typical researcher experiences today. 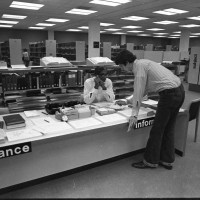 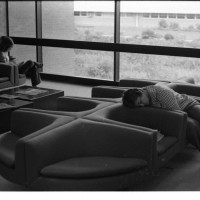