Merrill Ellis’ story at North Texas echoes many recurring themes in the 125-year history of the university: humble beginnings, ingenuity, and innovation. The Electronic Music Center (EMC) he founded in a house at 1721 Mulberry Street in 1963 (near Avenue D) laid the foundation for what is now the Center for Experimental Music and Intermedia (CEMI) in the UNT College of Music’s Division of Composition Studies. The Merrill Ellis Music Collection (1960-1981) is held by UNT Music Special Collections and is available for use by special arrangement.

Born 99 years ago in Cleburne, TX, Ellis studied clarinet as a child, and earned a Bachelor of Fine Arts degree from the University of Oklahoma in 1939, and a Master of Music in 1941. He also studied composition privately with Roy Harris, Spencer Norton, Charles Garland, and Darius Milhaud. He joined the faculty of what was then North Texas State University in 1962, after teaching band, orchestra, and choir in high schools in Texas and Missouri, and a variety of subjects including music education and music theory at several colleges in Missouri. At North Texas, Ellis taught music theory and composition in addition to directing the Electronic Music Center. During the 1960s, Ellis persuaded Robert Moog to build a synthesizer — the second “Moog” ever made — for North Texas.

The Electronic Music Center grew in stature under Ellis; a new Intermedia Theater was established in 1979, and now bears his name. Ellis, who died in 1981, was succeeded as director by Larry Austin and Phil Winsor, who continued to raise the profile of the EMC, particularly in the 1981 International Computer Music Conference (ICMC), which hosted 400 scientists and composers of computer music at North Texas, including guest composers John Cage and Lejaren Hiller.

The EMC was renamed the Center for Experimental Music and Intermedia in 1983, reflecting the expanded scope of activities which was a legacy of Ellis’ leadership. Martin Mailman, a fellow composer and longtime member of the College of Music faculty said in 1986: “Merrill was a valued colleague and friend who was a true pioneer in electronic and multimedia music. His works express, far more eloquently than any words of mine could, his unique contribution to the music of our time. Indeed, his creative vision was a cornerstone in the establishment of CEMI. It has been a privilege to have an opportunity to celebrate his memory in this environment that he inspired with his work and spirit.”

View a 2014 video celebrating the 50th anniversary of CEMI and Ellis’ legacy:

Listen to a 1969 recording of Ellis’ “Kaleidoscope”: 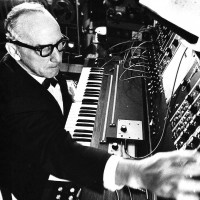 Merrill Ellis and the second ever “moog” (synthesizer made by Robert Moog), built for use at North Texas 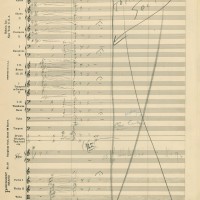 A page from Ellis’ 1969 composition “Kaleidoscope.” 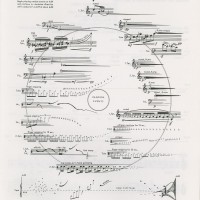