Before Roy Orbison was topping the charts, he was studying geology at North Texas State. His stay was brief; he is absent from the school’s yearbooks, but his time in Denton did a great deal to launch his career as a singer, particularly where a well-known rock ‘n’ roll classic is concerned: Unbeknownst to most listeners, numerous threads of Denton’s and UNT’s musical history are woven into the two minutes and fifteen seconds that are “Ooby Dooby.”

Orbison and two fellow musicians from the town of Wink, Texas enrolled at North Texas in the fall of 1954. A song from members of the Lambda Chi Alpha fraternity caught his ear: “Ooby Dooby” was said to have been written in 15 minutes on the fraternity house roof by the songwriting duo Wade Lee Moore and Dick Penner. Moore and Penner recorded a handful of rockabilly selections for Sun records as “Wade & Dick – The College Kids,” together with Don Gililland, an early One O’Clock Lab Band guitarist.

According to the biography Dark Star: The Roy Orbison Story, Orbison later recounted first hearing Wade and Dick performing “Ooby Dooby”: “It knocked me flat … I was astounded because they made more music than the whole orchestra.”

Orbison’s hit recording of “Ooby Dooby” on Sun Records was the culmination of several prior versions which feature essentially the same presentation, but with variations in tempo and slight hitches in timing. Orbison’s group back home, the Wink Westerners, recorded it, and Orbison recorded it at the famed Jim Beck Studio in Dallas in 1955, and again in Clovis, New Mexico in 1956. He was not, however, the only Denton claimant to the tune: Sid King & the Five Strings, whose sound became a template for later rockabilly acts, also recorded the tune at the Beck Studio.

Ultimately, however, Orbison’s 1956 Sun Records version became the authoritative version of the tune, on which later versions were based. With that title, a little piece of Denton boldly went where no Dentonite had gone before when it was featured in a bar scene Star Trek: First Contact, in a moment of respite from fighting the Borg.

A “demo,” possibly the Dallas recording: 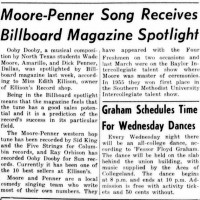 An article from the June 15, 1956 issue of the Campus Chat, with Orbison’s name unfortunately misspelled. 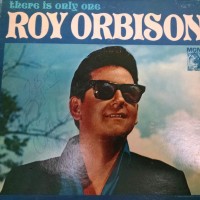 An autographed copy of Roy Orbison’s There Is Only One from the UNT Music Library. 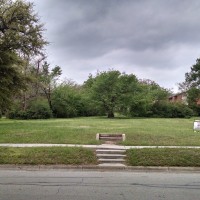 The vacant lot at 321 Fry Street, with steps still intact: once the site of the McKenney boarding house where Orbison is said to have stayed.