In this story, hailing from Lake Dallas, Texas, the University of North Texas’ heavyweight champions, the immortal Von Erich Family!

One of the storied names in professional wrestling, the members of the Von Erich dynasty have been in the ring since 1953, when patriarch Fritz Von Erich (real name Jack Adkisson) made his debut in Dallas. Eight members, three generations, of Adkissons have wrestled under the Von Erich name. Though Fritz himself had attended Southern Methodist University, two of his sons—Kevin and David—attended North Texas State University during the 1970s.

Kevin entered NTSU in 1975, where he played second string fullback under Coach Hayden Fry. Unfortunately, a series of knee injuries the following year would end his football career. His brother, David, came to NTSU that fall and played both football and basketball. Though Coach Bill Blakely remarked at his talent on the basketball court, David left NTSU in 1977 to join his brother on the World Class Championship Wrestling circuit.

Throughout the 70s and 80s World Class Championship Wrestling was on the rise in the Dallas-Fort Worth area, spurred on by the popularity of Fritz Von Erich’s three sons: Kevin, David, and Kerry. Many of these bouts were televised live from Dallas Sportatorium, but NTSU also played host to the Von Erichs at the Men’s Gym. On October 27, 1973, The Denton Evening Lions Club sponsored a match to benefit The Sight Conservation Program. This match featured Fritz Von Erich, Master of the Iron Claw, against the villainous Russian Nicolai Volkoff. Kevin, David, and Kerry made almost yearly appearances in the Super Pit during the 1980s in WCCW bouts sponsored by the Denton Hi-Noon Lions Club, the Evening Lions Club, Pi Kappa Alpha, and Sigma Phi Epsilon.

The story of the Von Erichs is one of triumph in the ring and also personal tragedy. In April 1984, Sigma Phi Epsilon sponsored a match that was intended to be a homecoming for David after a tour with All Japan Pro Wrestling. Unfortunately, David fell ill during the tour and died on February 10 of acute enteritis. Brothers Kevin and Mike returned to NTSU in his honor in April to defeat their arch-nemeses the Fabulous Freebirds, Terry Gordy and Michael Hayes. The following February, Kevin made a follow-up appearance at the Men’s Gym to defeat “Gentleman” Chris Adams.

Though Mike Von Erich tried to fill the vacancy left by his brother David, his time in the ring would be short. After suffering a serious shoulder injury during a tour in Israel in 1985, Mike was never able to return to the ring at full strength. Kerry was involved in a life-threatening motorcycle accident in 1986 that resulted in the amputation of his right foot. The next year, frustrated by the injury that had forced his retirement, Mike took his own life. The loss of Mike and David weighed heavily upon the family, especially in the shadow of Fritz’s first son, Jack, who had been killed in an electrical accident at a very young age in 1959.

Chris Von Erich, the youngest of Fritz’s sons, began wrestling in 1990. Unfortunately, his small stature and brittle bones meant that he would never achieve the level of success that his father and brothers had enjoyed. On September 12, 1991, Chris took his own life. Two years later, after the loss of four brothers and still struggling with the aftermath of the motorcycle accident, Kerry Von Erich committed suicide as well.

Though a shadow lay over the family after so many tragic losses, the Von Erich tradition survived. The third generation saw Kevin’s sons Ross and Marshall, and Kerry’s daughter Lacey, competing in the Total Non-stop Action Wrestling brand.

The story of this north Texas wrestling dynasty is recounted in Faded Glory: The Story of the Von Erichs. In the documentary, longtime voice of NTSU Athletics (as well as World Class Championship Wrestling) Bill Mercer recalls that Fritz Von Erich gifted his iron claw signature move to the students at North Texas as a symbol of pride in their athletics teams. Though it is difficult to verify where and how UNT’s eagle claw hand sign originated, the iconic claw is one more link between the Mean Green and the titanic Von Erich Family. 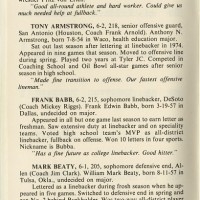 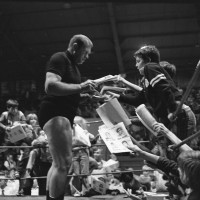 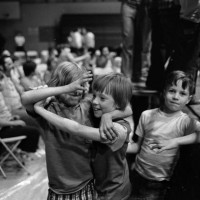 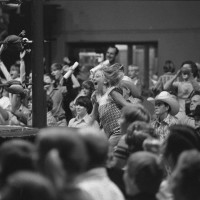 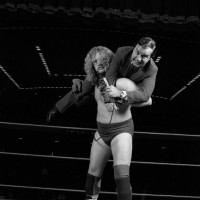 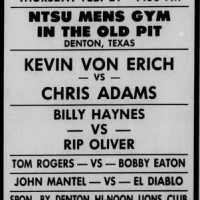 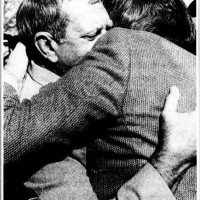