On September 16,1890, as the doors opened to the Texas Normal College and Teacher training Institute, President Joshua C. Chilton stated that it was the school’s aim “[…] to become leaders in the education of the young men and women of Texas […].” With the president’s words, a seed of loyalty and spirit was planted in the ethos of North Texas. Through every name change, the mean green spirit evolved into deep-seated traditions that are known and loved by the university community.

“North Texas” has been in every one of our institution’s names since 1894, signaling a tradition of faithfulness to our regional heritage. This devotion is evident in the college yell from 1911 which proclaimed “Who are we? We are the students of T.N.C.” Today’s UNT students inherited this fierceness and pride for the university. Many traditions we see today in celebration of athletic events and university-wide festivities were begun decades earlier, providing continuity between generations of green and white clad students.

One longstanding Spirit tradition of the university is the Spirit Bell. In 1891, a 2,000 pound bell was brought from Michigan and installed in an 18 foot tower adjacent to the first administration building. Located in the west entrance of the current administration building, the bell tower became a visual icon on campus. Originally, the bell served as a call to change classes and to sound curfew. Over the years it also became a fire alarm and was used by fraternity pledges who climbed the tower to turn the bell’s iron crank. But, most notably, the old UNT bell took on the role of ‘Paul Revere’ of victory; a name coined by North Texas cheerleaders in the late forties. The victory bell was used by cheerleaders and by the Talons, a spirit organization at UNT, as a sound of strength and vitality. When the bell boomed during football games, the spirit which resonated from the old UNT bell reflected the enthusiasm of the crowds and of the Talons, who ran up and down the field with every echo of the ring.

In 1978, the first sign of an irreparable crack became visible in the old UNT bell, signaling the need for a replacement. The crack in the bell distorted the bell’s tone which made it impossible to ring. The University Union housed the retired bell and a search began to find a new spirit bell. In the meanwhile, a smaller bell was used at the games, but it was not the same. This bell lacked the intensity of the old UNT bell and a search began to find one which matched the qualities of the old bell. A twenty year search yielded a bell from Brosamer’s Bells, a Michigan based company which refurbishes bells for auction. This new bell was the exact style and time period as the old North Texas bell! With this new bell, the tradition of sounding a call to arms during football games continues for generations of eagles to come. The Spirit bell and its recognizable ring is a foundational spirit tradition that makes Eagles who they are – green and white to the core.

Like the Spirit bell, UNT’s boomer the cannon is another auditory spirit tradition. Since the 1970s, the cannon has been part of the Talon’s traditions. The cannon is scale replica of a model used in the Mexican-American War (1846-1848). Boomer is the only smooth muzzle loader – loaded from the front with black powder – on a college campus. Three hundred grains of powder are fired with each shot which is lit using a momentary switch hooked to a model rocket igniter.

North Texas alumni have kept the cannon well-maintained through the decades; adding a handcrafted oak limber to carry accessories, which doubles as a perch for Scrappy during parades. In the late eighties, Boomer was fired in a grass strip between the track and the scoreboard at the south end of Fouts field. Currently, the cannon sounds off when North Texas scores, but it is also fired during kick-off, half-time, and at the end of football games. Eagles can also hear Boomer at special campus events such as University Day.

Seeing the green lights of McConnell tower signify victory for North Texas. The tradition began in 1974 after a NT-SMU game. The doors of the Administration building were painted red and blue by SMU fans to celebrate victory. From this event came the idea for lighting the tower, shining a shade of green for fellow eagles, and also for opposing teams, to showcase triumph.

With each generation of eagles who walk through campus, the spirit traditions, both old and new, are heard and seen. The memories of these traditions embed themselves in our university culture with every story told or with every photo shared by an alumnus, resonating for future generations to pick up where their predecessors left off. 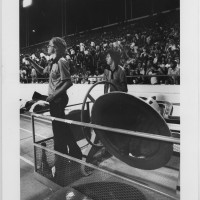 Two members of the Talons, a North Texas spirit organization, ring the Spirit bell during a football game, circa 1970s. 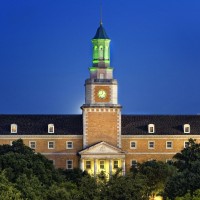 McConnell tower, located on the Hurley Administration building, lit green in celebration of a victory, no date. 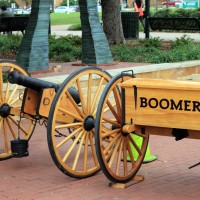 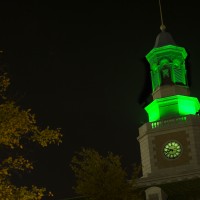 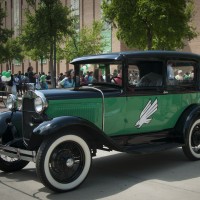 The Mean Green Machine on campus during University Day, no date. 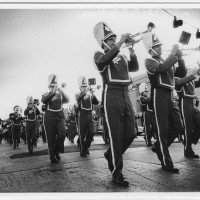 The Green Brigade marching during a 1983 homecoming parade. 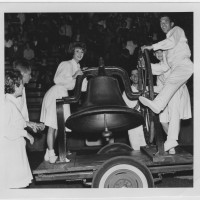 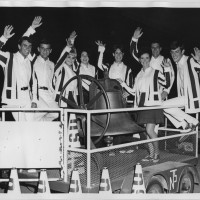 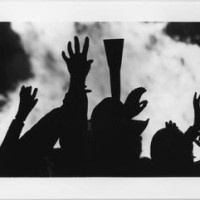 A crowd of North Texas students silhouetted against the homecoming bonfire in 1980.