The student body at the University of North Texas grew to a whopping 37,000 during the 2015-2016 school year. Considering our humble beginnings offering courses to 70 students in a rented space above a hardware store in downtown Denton over a hundred years ago, our journey from the Texas Normal College and Teacher Training Institute to the largest public University in the North Texas region has always relied on the amazing students that make up our growing student body. As we welcome a new class of “Mean Green” freshman, let’s look back on our history of first-year experiences and traditions.

At the turn of the 20th century, the number of students enrolled in long-sessions at North Texas State Normal College hovered around 500. In 1908, President Bruce set a goal to enroll 666 students before the end of the year. An almost 12% jump in the student body seemed unattainable at first, but J.N. Simmons from Mississippi enrolled as the 666th student on April 21, 1909. Bruce pinned a sign on the freshman’s lapel that read “I am 666” and sent him out into the yard as a display of pride. In those days, students lived in privately-run boarding houses; the first on-campus dormitory structure built by the school to house enrolled students, Marquis Hall, wasn’t erected until 1936.

Almost 50 years later, President Matthews set a similar goal: to enroll 6,666 students for Fall term. In 1958, Ronald Cox became the 6,666th student to register for classes. As a nod to his predecessor, President Matthews hung a sign around the freshman’s neck that read “I am 6666,” and they both posed for photographs.

In the 1920s, freshmen (or “fish,” as they were called by upper-classmen) sponsored “Freshmen Day,” a day of celebration and competition between under and upper-classmen. Classes were canceled for the festivities; in 1926 that included a parade highlighting “the different periods of history form the age of uncivilized man to present time” featuring older cars decorated to resemble roman chariots and a king’s litter. Students also participated in athletic activities, pitting freshman against their older classmates in games of push ball and tug of war. In later years, freshman day became a student-supported carnival including hot-dog stands and sides-show booths.

Orientation is an important introduction to campus resources, but it’s also a good way to meet new friends. Many campus organizations lead activities throughout the year to encourage new friendships. In our earlier days as a Teacher’s College, the Young Women’s Christian Association (YWCA) hosted a “Get-Acquainted Party” for incoming students during the summer session. At the time, a number of students attended classes during the summer session only. In 1924, students attending the Get-Acquainted party were instructed to bring a piece of strong and a paper sack. Once there, the students fashioned a glove using their sack (tied at the wrist with string). The winner of the game was the first to completely wear out their “glove” from shaking hands with their new classmates.

Our current freshman class is comprised of mostly digital natives, for whom the idea of the internet is ubiquitous. They might be surprised to know online registration has only been available for a little over a decade, but UNT has a long history of facilitating the often-times complicated process of paper registration. Today the office of University Registrar spans an entire department of the University, employing over 63 staff and students. In 1932, students were treated to a much more personal experience. P.E. McDonald was the university registrar for more than two decades in the 20’s and 30’s, the sole person tasked with arranging course schedules, filing credits, awarding diplomas, and documenting transcripts. McDonald began his tenure in 1910 teaching Physics and Latin for a decade before taking over as registrar in 1922. He was credited with having a remarkable memory for names and faces of past students, able to recall many of them years after they’d left North Texas.

The Green Jackets were also often on hand to assist with registration under the direction of Beulah Harriss, the first female faculty member hired to the athletics department. In addition to her duties supervising the women’s athletic program, Harriss coached women’s basketball and served as faculty advisor for the Green Jackets Club, a female-only spirit and service organization she founded in 1926. The Green Jackets gave directions, helped students determined which lines to stand in to schedule specific classes, and (most importantly), they passed out the all-important freshman beanie. Purchased during registration, freshmen purchased a beanie with their expected date of graduation and were expected to wear them at the season’s first football game and throughout the beginning of the fall semester. The beanies were bright green with white lettering and were made of boiled wool. Most of the students who see them in Special Collections are glad the freshman beanie tradition died out.

We’re happy to welcome the class of 2020 to the University of North Texas and hope our current freshmen class has a historic first year! 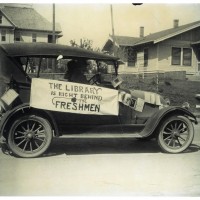 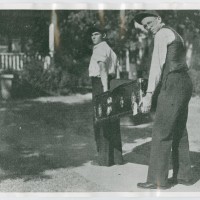 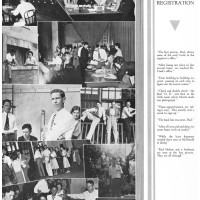 This montage from the 1932 Yucca includes some scenes of students navigating the registration process. 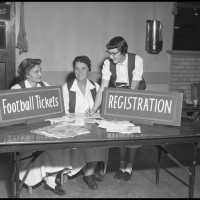 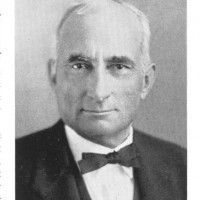 P.E. McDonald served as the University Registrar for over 20 years. 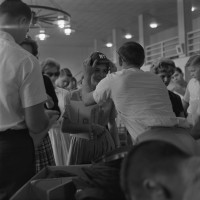 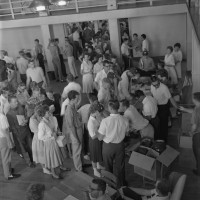 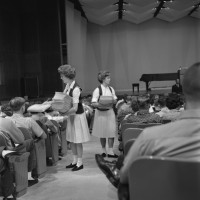 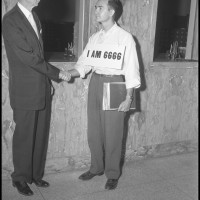 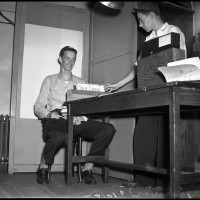 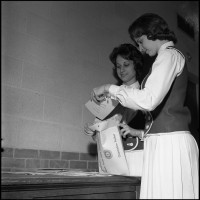 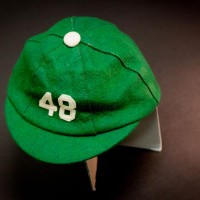 The freshman beanie, purchased during registration, was usually the first thing freshmen bought on campus. 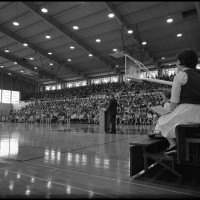