“They thought I was a surrealist, but I wasn’t. I never painted dreams. I painted my own reality.”- Frida Kahlo

In 1905 Estherville, Ohio, Silas and Mary Compton welcomed their new son, Carl Benton Compton into the world. Instead of following his father into the medical profession, Carl Compton became a painter, sculptor, ceramist and lithographer (among many other things) and, in his success, a figurehead for surrealist and regionalist artwork in the Southwest.

The young Compton exhibited a voracious appetite for absorbing life and in his adult years traveled around the globe studying art in its many forms. In 1929 Carl Compton graduated with a Bachelors of Art from Notre Dame and shortly after embarked on a journey through Europe where he studied at Paris’s Academie de la Grande Chaumiere and Academie Colarossi under renowned artists Emile Antoine Bourdelle and Boris Israelevich Anisfeld. After returning to the States, Compton attended the Art Institute of Chicago where he not only received his Bachelors of Fine Arts but also met the love of his life and fellow artist Mildred Norris. The pair were married on June 24, 1935.

After returning to Notre Dame to accomplish some graduate study in education, Compton and his wife moved to Georgetown, Texas where they would live for more than seven years. Compton was welcomed into Southwestern University’s newly developed art program where he not only served as a professor, but also as Head of the Art Department. Compton developed many interests during his time at Southwestern. The artist joined the Associated Art Instructors of Texas and became editor of the organization’s Texas Art Teacher journal. In addition, Compton was an avid member of the Texas Sculptor Group and later even joined the Texas Archaeological Society. However, it was when Carl Compton and his wife decided to lead a field school for art students in Mexico that he found his true inspiration. On their first trip south of the United States’ border in 1937, Compton became enraptured by the history and culture of the Tarascans, the ancient group who served as the main antagonists of the Aztecs. Compton’s art work was deeply influenced by his experiences in Mexico. The Comptons continued to visit Mexico as often as possible in the next few years, and in 1943 Carl Compton received his Masters of Fine Arts from La Escuela Universitaria de Belle Artes and Del Miguel Allende.

In 1944, Carl Benton Compton traded in Georgetown for Denton and became an art professor and Director of the Institute for Inter-American Studies at North Texas State Teachers College (NTSTC). Compton soon developed deep ties to the students and faculty as well as the Denton community as a whole and he chose to make North Texas his permanent home. Compton was involved in many aspects of the Denton art scene; he was a widely respected artist and his work was featured in countless exhibits.

An often overlooked aspect of Carl Compton’s life was his interest in archaeology. Through his ties with the Texas Archaeological Society, Compton aided in field expeditions on Lake Lewisville to study hearth sites and in 1953 became part of the North Texas excavation team to extract one of the most intact mammoth skeletons in the state. The artist would prove very vocal in his archaeological observations, going so far as to write several articles on field methodology (one in particular was published in The Ohio Archaeologist: “Radiocarbon Dating: Myth and Folklore.”) Undoubtedly however, Carl Compton’s true calling was his art.

Inspired by artists like Frida Kahlo and Pablo Picasso, Compton’s art is celebrated as a surreal insight to the regions he studied and loved. Paintings such as “Rooster,” “Woman with Nautilus,” and “Blue cow” introduced vibrant colors and modernism to the Southern art scene Compton inhabited. “These works have, I hope, the element of humor, though they are not intended to be strictly humorous. Like the environment which inspired them and in which they were produced—Mexico, Texas, and the great Southwest—they have sometimes the element of crudity and uncivilized emotion. These are the things as I see and feel them.”(Compton, The Campus Chat Vol. 28, No. 1, pg. 2)

Carl Benton Compton served at North Texas for 25 years before retiring in 1969. He passed away in Denton County in 1981. At the time of his death, Compton had well over 53 recognized and published works and had been featured in over 60 exhibits. Today his artwork is still utilized in current exhibits (The University of North Texas recently hosted a UNT on the Square exhibit from March 4-March 26, 2016; The Comptons of Texas: Rediscovered Work by Carl Benton and Mildred Norris Compton) and Compton has permanent collections in The Heritage Center, San Diego and Harvard University. Carl Benton Compton’s artistic legacy is continued on by his granddaughter, Eden Compton.

The University of North Texas Portal to Texas History and Special Collections house both digital and physical material on Carl Benton Compton including, but not limited to; newspaper articles and clippings, journal entries, personal and professional correspondence and handwritten notes included in the Carl Benton Compton Collection. 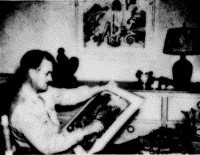 Image of Compton Painting from The Campus Chat, August 5, 1949. 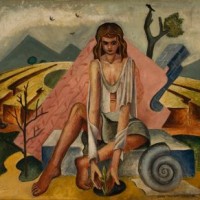 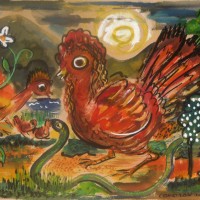 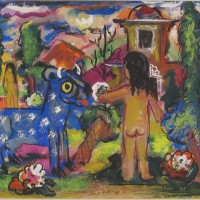